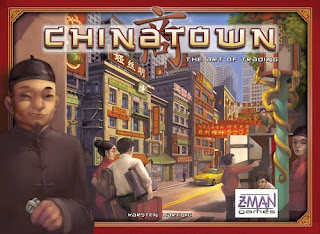 You know, we just don't see enough blatant disregard for cultural sensitivity. We get plenty of games with violence, but the various factions are so often completely fictional. It's not exactly insensitive to make fun of dwarves, unless by 'dwarf' you mean like that little dude from Austin Powers.

So sometimes it's just really nice to open up a box of games and have so many ridiculously overstated stereotypes that it almost makes you pull your eyes into pseudo-Asian squints and talk with a choppy fake accent. When you break open Chinatown and see that you'll be building take-out joints and Chinese laundries, you'll know that you're about to play a game that will allow multiple opportunities to say, 'No ticky, no washy!'

The object of the game is to build business in New York's Chinatown that will make you rich. You have to get adjacent spots with the same kinds of businesses to turn them into really big businesses, but your opponents will get in your way. Then you'll have to make deals with them to trade your tea house for a fish monger, and then swap your storefronts so that you can put your child-labor factory deep inside a huge apartment building. Meanwhile, you can all forget how to pronounce the letter 'R' and bow instead of shaking hands.

The whole thing starts off slow, but it builds up pretty fast, with wild negotiations flying all around the table, often in ridiculous fake accents. Everything and anything is negotiable - if you own it, you can trade it away. And since it's generally pretty obvious how much a particular trade is worth, sometimes you'll just throw down a giant pile of money in order to get the big payoff. It's basically all the greatest parts of Monopoly, and none of the boring dice-powered snooze fest. I love Monopoly, but this is better - you get to do all the dealmaking and none of the endless passing Go.

It looks great, too. The board is a map of Chinatown, all broken down into shops. A parade with paper dragons flies through the middle of the board, while off to one side, a couple of bad Asian drivers have had a car accident, causing them to get out of the cars and argue about who spilled more bags of rice on the ground. The art on the store tiles is very nice, complete with Chinese characters and pictures of prawns and sewing machines. It's all great for getting you in the mood to cater to stereotypes. What the game really needs is a massage parlor, so that every time you collect money on it, you can say, 'Me ruv you rong time,' but even as it is, there's plenty of chances to make tasteless jokes that are not funny but betray a complete ignorance of foreign cultures. (And in this case, betray an ignorance of modern film, since that line is more associated with Vietnam than China. Same continent, though.)

I'm not that big on political correctness, so I'm not really offended by the thematic elements in Chinatown, but if you're prone to fits of righteous indignation, Chinatown is likely to make you drop into an apoplectic fit. Hell, even the counter you use to mark the turns is a little guy wearing one of those round rice paddy hats, just like every person illustrated on the cover. It seems far-fetched to me that everyone living in New York in the late 1960s still dressed like they just ran over after filming at the kung fu matinee theater, but what the hell, it's cute anyway.

What's not cute is how fast Chinatown can get brutal. Any time you have a game built almost entirely on negotiation and trading, there's a great opportunity for someone to get their feelings hurt, and Chinatown is better at it than most. Most of the game is the trading, swapping real estate for shops and paying cash for the chance to complete your businesses. This is the kind of game where Donald Trump would steal everything and run away with it, except that being so heavy in negotiation, it falls prey to the second big problem with negotiation games - the close-out. This is that thing where you know someone is good at trading, so you refuse to deal with them, often cutting off your nose to spite your face and making horrible deals with other people while that one guy who should be winning just sits there fuming because nobody will talk to him unless he's making a deal so one-sided that it's obvious how badly he's going to lose.

But even with the problems inherent in a game that's all about negotiating and making deals, Chinatown is a really fun game. I liked it enough to play it several times, even after I had played enough to write the review. It's got lots of things I love in a game - shrewd deals, fast-talking, tactical maneuvering, bluffing and smart plays. And that's not even counting all the opportunities you'll have to mock a foreign culture.

Pros:
Tons of negotiation and tricky deals
Long-term planning pays off, but sometimes you have to act fast
Very attractive
Hilarious cultural stereotypes

Cons:
A little on the brutal side
Those stereotypes really are pretty offensive

Dogstar Games is carrying Chinatown, with a great discount off retail and free shipping! If you like hardcore wheeling-and-dealing games, you could do a lot worse.
http://www.dogstargames.com/product/ZMG7028
Posted by Matt Drake at 2:46 PM

Our group has managed to avoid the accents/stereotypical phrases. Otherwise we've had fun with this game, too.

I'm afraid my group just couldn't (or wouldn't) do it without the accents and stereotypical catchphrases.

I mean, last Friday night, we ended up playing four games of BANG! in character.

By the way - is there any way you can put something in your blog that shows a ratings scale and how you rated the game against it?

I ask because I'd love to see a search that would be able to turn up the games you rated "4 Star" (though you'd probably call "stars" something a hell of a lot funnier) or major stinkers.

Basically, I'm feeling lazy and I don't always want to have to skim through all of the reviews that I'd previously read from Day 1 until present to jog my memory of a highly recommended game that I didn't pick up right then and there.

I concur with Sharon's suggestion of a rating system.

I'm not a huge board game buff, I'm just looking for something to amuse me and a few roommates. I don't really want to sift through all the poor reviews trying to find something fun for the lot of us, and a rating system of some kind would really help this.

I love this game as well. My only wishes were that it had smaller denomination bills for smaller trades. Also, I found it a bit odd that property is basically free. I kept feeling like I should have paid every time I got a deed.

Otherwise, we played this continuously one night until 2 am.

A ratings system isn't a bad idea at all. I'm not generally in favor of them, exactly, because they're a linear scale when most games defy a 'good-better-best' rating. Like I might hate Puerto Rico, but I know it's a good game. Someone who likes that sort of thing would give it a 10, and I would give it a 3, and yet neither accurately represents what kind of game you're getting.

I'll think on it and come up with something bitchin'.