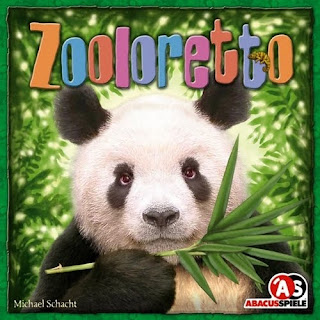 As far as I can tell, I'm pretty stupid. I can't figure percentages in my head, I don't have any idea what's in the new healthcare reform bill, and for the life of me, I don't know why I can't win at Zooloretto. It seems like such a simple game, but somehow, I always wind up building a zoo where most of my animals are hiding in the barn and all we sell is stale peanuts.

The object of Zooloretto, in case you hadn't guessed yet, is to populate your zoo. You start with three pens to hold your critters, and you can get another one later. There are many different animals, including zebras, camels, elephants, teenage children and grown men with mullets (those last two might be in an expansion). You take turns filling up trucks with animals and vending machines that you find on the side of the road, then when a truck looks nice, you grab it. Then you put all the stuff that's in the truck into your zoo, and hopefully you don't pick up extra animals, because each pen can only hold so many of a single kind of animal. Leftovers have to be stored in the barn, where tourists can't see them but you still have to pay someone to haul away their poop.

Since each truck only holds three tiles, the trucks fill up fast and the game goes in a hurry. You have to grab the trucks at the optimum time if you want to win - grab early, and you might miss out on a sweet truck with that breeder panda you were hoping to get. And if you grab late, you could be stuck with monkeys when your zoo is already full up with a bunch of other animals, so the chimps wind up going all Lord of the Flies inside the barn, until one of them figures out how to start a fire and they burn your zoo to the ground.

Maybe part of the reason I was so much worse at Zooloretto than my wife and daughter was because I didn't like it. They both seemed to click on it right off the bat, but I never timed my truck grabs properly. If I grabbed early, I missed the animal I needed. If I grabbed late, I wound up holding a violent hyena and a third popcorn cart. To me, the game felt like an exercise in efficiency management, and while I wouldn't say I was outright bored, it just never made me want to play.

My opponents, on the other hand, grabbed this one and ran with it. They were delighted with the colorful art, and they loved the idea of building a zoo. They grabbed the bonuses for filling up enclosures, and they both managed to fill pens by getting the Mommy panda and the Daddy panda to take the night off and relax by the fire with a nice bottle of red wine, which resulted in them having babies while my sterile, grumpy, sexually frustrated animals paced their enormous empty cages and complained loudly about the onset of menopause.

It's especially sad that I can't win Zooloretto because I was the only one who understood the scoring when we started playing. You get a big score if you completely fill a cage, and a smaller score for almost filling it. Keep your extra animals to a minimum and diversify your vending stands, and you'll lose fewer points. I knew this going in, and yet my daughter (who picked up the scoring halfway through) filled all her pens to capacity before we were two-thirds of the way through the game. She whipped the hell out of me.

After we played our last game, as we were putting it away, I remarked that I didn't care much for Zooloretto. My daughter was outraged, and told me that I just had to give the game a positive review. My wife agreed with her, and told me that it would not be fair to blast the game just because I found it rather dull. So here's the deal - I don't like Zooloretto, probably because nobody dies. My opponents found it charming and engaging, probably because nobody dies.

Cons:
Feels like a European efficiency exercise
Nobody dies

Dogstar Games has a decent price on Zooloretto, plus free shipping, so if this sounds like your kind of pastime, you can check it out here:
http://www.dogstargames.com/product/RIO320
Posted by Matt Drake at 4:24 PM

Nobody dies, but at least there is some sexual activity involved...

"They grabbed the bonuses for filling up enclosures, and they both managed to fill pens by getting the Mommy panda and the Daddy panda to take the night off and relax by the fire with a nice bottle of red wine, which resulted in them having babies while my sterile, grumpy, sexually frustrated animals paced their enormous empty cages and complained loudly about the onset of menopause."

it's things like that that make you my favorite board game reviewer. When I learned the game, I was told that that was a slaughterhouse, so you didn't want to have anything in it at the end of the game. A barn makes a lot more sense, but in our version, there is killing.

what do you mean nobody dies?
If you pay 2 coins you can destroy an animal in the barn. That's the best bit.

Although no one videos it.

No combat... my kinda game.

My daughter never would have played if we said we were paying to kill the animals, so we said we had to pay to ship them to another zoo.

I would have much preferred to say we were turning them into food for the other animals, but my daughter would have disowned me.