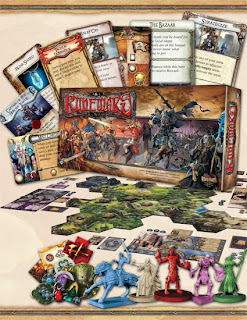 Making games is a tricky business. I like to think of it like baking - take your bread out before it's done, and it's all gross and sticky in the middle. Put too many ingredients into your bread, and you can't even taste the good parts because you're too busy picking the orange rind and flax seeds out of the crust. Leave it in the oven too long, and you wind up with this blackened chunk of inedible charcoal.

So if making games is like baking, then Runewars is like a flamboyant fruitcake. I sort of like fruitcake, but sometimes it seems like the people who make fruitcake get completely insane with the ingredients. Like if you just had some dried cherries, maybe some nuts and some candied orange, you would be fine, but then they add dates and figs and pomegranates and God knows what else until you pop a bite into your mouth and immediately feel a need to spit it out into a napkin.

Runewars starts off with great stuff. You've got four warring races from the world of Runebound - elves, humans, undead and the spiky Uthuk (I guess all the orcs got stolen by the Games Workshop people). You're all trying to quest for the dragon runes, but there aren't many out there, and sometimes the best way to get them is to steal them from someone else. To do that, you need armies, and to build armies, you need resources, and to get resources, you need to grab land.

But that's not all. Most of the land you could grab is occupied by neutral armies, tough bastards like dragons and hellhounds who can totally repel your invading hordes (especially because you don't start off with much in the way of hordes). But if you're feeling lucky, you can try to persuade those neutrals to team up with you, and if you do, you can double the size of your army without spending a dime. Which is nice, because you don't have many dimes, either.

The game lasts for six years, or until someone wins, either of which could take you most of your afternoon. Every year is broken down into seasons, and you issue orders every season to do stuff like recruit or start wars or tax your cities. You can only do any given order once a year, and there's real incentive not to dive right into the war-mongering. Real strategy and planning goes into each year of the game, which makes Runewars one of the better thinking-man games I've played in a long time.

Of course, anyone who reads much fantasy fiction knows that to really sway the course of a war, you need heroes, and Runewars is no different. You can send Mad Carthos or Sillhouette or Ronan the Slightly Gay Ranger into the wild to grab powerful magic items, and maybe even those all-important dragon runes. They don't often turn the tide of a battle, but they might, especially if you've got the right tactics cards.

So yeah, you also have tactics cards. And you also have objective cards. And order cards, and fate cards, and season cards, and reward cards. You have a lot of cards, because if Fantasy Flight made a Christmas dish, it would be the wackiest fruitcake you ever had, full of odd nuts and jellied fruits and maybe avocado.

You also have lots of markers, for training your heroes and tracking influence and for fake runes and real runes and damage. And in case you think your game doesn't have enough extra stuff in it already, you can use exploration tokens, which are an optional variant for anyone who absolutely loves chocolate-covered raisins in their fruitcakes.

Admittedly, there's already a lot going on here. There's definitely more than is needed. For instance, training heroes seems almost superfluous, and could be eliminated with a couple simple tweaks to hero stats. The seasons are a great idea, but they could have simply put four symbols on a little board and moved a token around it to say which season it was. Instead, you have four stacks of cards, so that you can have totally random events that seem to help out the guy in the lead and let people who are already losing enjoy the warm glow of a painful beating. These events, in case I wasn't clear, slow down the game without adding enough to justify them.

The worst offender in the 'too much crap in a fruitcake' department is the battle system. We found ourselves avoiding battles simply because they were too much effort. A couple quick die rolls and we could have gone on with our turns, but the game doesn't use dice. It uses a complicated and irritating card thing that makes battles that could end in two minutes take as long as five or ten.

And the heroes are a great part of the game that you can't afford to ignore, but there are still too many things surrounding the hero part of the game. We didn't need all the extra crap with the heroes. You're just moving and drawing cards anyway. Put the card draws on dice, have simple and quick resolution, and get on with your game. But no, you have to take ten minutes for the guy with three heroes to wander all over the board, collecting treasures and smiting villains, so that the dude whose only hero got killed can go, 'yeah, I'm done.'

But even with all this extra stuff, Runewars is still really fun. It's like eating a tasty fruitcake, but you have to steel yourself for the bitter walnuts. There's a level of strategy and planning that seems to be missing from a lot of your epic-scale warfare games. You kind of have to pick one direction, push hard, and be willing to adjust on the fly to meet the changing circumstances around you. You'll need some cautious gambling, a few bold risks, and a healthy amount of reading your opponents' minds. It's very fun, even if there is too much to do.

With a good bit of discretion and self-control, Runewars could have been the world's finest banana bread, with just the right combination of fruit and nuts to make anyone beg for a second slice. And it's still really fun - I'm itching to play it again, so any slights to the game are overlooked. But even while I'm playing it again, I'll be complaining about all the stuff that bothers me, and I will probably be inventing a quick dice mechanic that can replace those damned fate cards. Because I can get past almond slices and dried prunes if the cake has enough awesome bits, and Runewars has more than enough positive appeal to get past the fact that you have to spit out all the grape seeds.

Cons:
Too many dried dates and prune pits get in the way of a damned fine fruitcake

Dogstar Games has Runewars, and as you probably know by now, Dogstar Games supplies me with games so that I can supply you with reviews. If you're going to buy the game, check it out here:
http://www.dogstargames.com/product/FFGRW01
Posted by Matt Drake at 7:02 PM

So, when you say it lasts for six years, you do mean in game time, not real time, right? I mean, it's Fantasy Flight, so you never know... I'm just sayin'...

Understandable confusion. It is FFG, after all. And if you're the one watching two other players battle it out, it could feel like six years.

This game looks awesome Matt, thanks for the recommendation. As for the battle system, it seems like the game tries to combine your traditional board games with the Warhammer genre as well as the card based games like Magic. Unfortunately, from how you've described it, it seems like they didn't find a good balance between all these ideas. I think I'm going to give it a try though -- looks too interesting to pass up.

I think that the battle system is quite good actually, my group found it fast and intuitive, even the fate cards. In my humble opinion you would not save much time switching to dice and I must say that ten minutes for a battle seems excessive, must have been a truly epic one:)

Love the "fruit cake" analogy which is highly appropriate for this game but I want to point out the following:
Although your right that there are an inordinate amount of tokens, cards and levels (heroes, armies, neutrals, councils, runes) to address in the game, it is because of this cornucopia that players can consistently surprise their opponents in how they choose to pursue both short & long term victory. In my experience, few war games offer the multitude of paths necessary for a player to truly surprise or enduringly confuse their opponents as to how they are planning to win. It is entirely possible for instance, for a player to focus on influence and heroes, appear to be losing the game and then suddenly be recognized by his opponents as the true threat because he has tied up their logistics through councils, recruited surprise neutrals to defend borders and commando-snatched runes from behind enemy lines with his/her heroes.

Oh my god shut up with the fruitcake analogy

I like the combat. I also don't think it's slow. I attribute that to the cards. Card draws are faster than slinging dice. What else I like about the card combat over dice is with dice the odds are always the same. With Runewars, as the fate deck depletes the odds change.

Also, with the rule that says the fate discard pile can be looked at at any time, an attacker can give some forethought into whether his army has a good chance at victory (and whether his opponent has a bad chance). This extends to the hero and negotiation mechanics as well. There are only a few of those crystal ball icons (good result) and 10 or so silver circle icons (mixed result) so by looking at the fate discard pile before attempting a quest, you can weigh your odds and decide whether it's worth attempting to resolve a quest or waiting another year.

One last thing, the Epic rules in the rulebook make the game better. Player interaction, i.e. combat, goes way up.