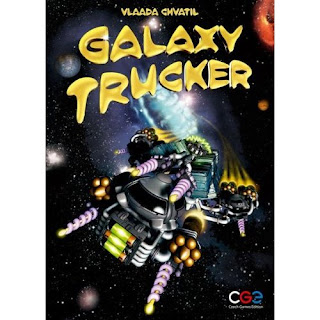 You know what chaps my ass? Well, OK, lots of things, but specifically today, it's when games are funnier than I am. Not that I'm Richard Pryor, or anything, but when I read the rules for Galaxy Trucker, I was laughing my balls off the whole time. Literally - I had to have them surgically replaced. It hurt like hell, but I couldn't stop laughing.

OK, it's not really THAT funny, but in all fairness, the only time I can't stop laughing is when I'm watching someone falling down. Or when I watch Jackass, and often, those two things coincide. So maybe I was able to quit laughing, but these rules are funny enough that they upstage me, and I take personal offense.

The problem is only exacerbated (that's a word almost as much fun as titular) by the fact that the game is a boatload of fun. You're all intergalactic profiteers who agree to pilot spaceships built from plumbing parts across the galaxy, and then sell those parts at the other end of your trip. Your ships will be ramshackle and makeshift, and when meteors start flying at you and pirates start to shoot at you, your ship will just fall apart. If you can finish with enough to sell, you're in good shape.

The most important part of the game is building your ship. You've got a template in the shape of a space ship, and it's got empty squares everywhere, and there's a kind of mad, simultaneous scramble to grab parts and slap them on your space-faring jalopy. You stick engines in the back and lasers on the front, cabins for crew and batteries for power, and hopefully all the parts connect properly, or parts of your disastrous vessel fall off before you leave the dock. Since everyone is competing for parts at the same time, you may have to place some pieces you don't really want, and you might end up completely unable to get that last life support system, which means the alien mechanics will tell you to blow a goat before they get on your deathtrap.

Once you all have ships, you race to be the first to get to your destination, and all the while, you deal with hazards that threaten to tear your little space rowboat to shreds. The first trip isn't too bad, but by the time you get to the third trip, you'll be lucky to cross the line with more than a cabin and a couple battery compartments. All your crew will be drifting in space and your engines will be flying random orbits around planets far from your destination.

In other words, it's fun.

And like I said before, the rules are freaking hilarious. I don't know how many times I was laughing right out loud. I mean, the book could have been co-authored by Dave Barry, who is, in my estimation, one of the funniest men alive. There are little paragraphs scattered here and there that provide background information on the ludicrous universe, and these will make you laugh out loud, but even the standard rules are a gut-buster. For instance, if you have brown aliens on your ship, they help with the engines, unless you don't have any, because as the rulebook states, 'they don't get out and push.' And before you ask, yes, that is funnier in context.

Now, a funny rulebook is not enough reason to buy a game, because you could always just go buy a Dave Barry book, and as I mentioned, he is side-splitting funny. But the funny rulebook in this case is just gravy, because Galaxy Trucker is a really, really fun game, and it would be just as much fun if the rules were duller than the instructions for stove cleaner. In fact, it would be a nice gesture if the rules were boring. It would make me not feel so bad about myself.

Pros:
Quick-thinking puzzle-style ship-building (all with hyphens)
Good planning must be balanced with fast action
Light-hearted, but with plenty of meat
The rules really are very funny

Cons:
The rules are funnier than I am

Here's the deal, in case I haven't driven this home often enough. Dogstar Games provides me with review copies, which is great, because after comparing games to prison love and transvestites, some publishers do not like me. If it wasn't for Dogstar Games, my options would be to give everything a positive review, or only write about games that I could get from the dollar store. So if you're going to buy Galaxy Trucker, you can support Drake's Flame by buying it from the guys who got me the game in the first place:

100% in agreement with your review.

This is a must play game when ever I drag it out.

Space Alert is another rulebook that is good for a laugh.

This game frustrates me to no end - people are faster than me and grab all the good bits first, and then I usually get banged up to all hell and back in the first round of cards.

We'd love a review of this for Boardgame Beast, so please get in touch if you're interested in being published?