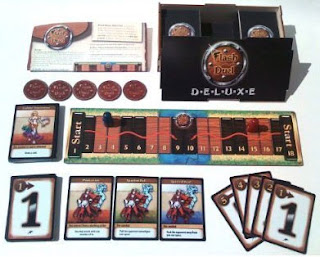 I get games from small publishers all the time. Usually, they have several things in common, such as:

* The rules are somewhere between manageable and catastrophic failure. People have great ideas, but they don't have any idea how to put them on paper, and the rules for many small press games tend to resemble junior high term papers.

* Components often suck. Small publishers have incredibly small print runs - like 500 copies (or less), and that means they can't get decent breaks on printing and assembly. And that means they have to settle for sub-par bits. Cards have raised ink that rubs off with your fingernail, pawns are ugly plastic doohickeys stolen from old copies of Sorry, and game boards are glued to that heavy cardboard you find on the back of spiral notebooks.

* Even when the games are brilliant, playtesting seems to have been a low priority. Without a huge market to test for flaws, small publishers sometimes overlook obvious errors because they know how the game is supposed to work. This often results in me flipping back and forth through the rules, apologizing to everyone else and saying, 'I swear, it's not in here.'

But Sirlin Games is not messing around. Maybe because the guy who makes the games was a pro working with other companies before he forged out on his own, he knows how to put together a slick product. Flash Duel, the first game from Sirlin, is a very nice package, and falls prey to none of the usual small press problems.

For instance, the art is fantastic. It has a definite Japanese cartoon look to it, but that look is getting more popular and accepted all the time, and it definitely works here. In a game where a gambling panda bear fights a stone golem, manga art fits the bill. And the illustrations aren't the only parts that work - the design is simple, but highly effective, with everything working together to make the game play smoother and easier. It's damned slick.

And the rules are simple to read and understand. They're short, and if you've played Knizia's En Garde, they'll make sense almost immediately. You advance on a track by playing numbered cards, then play numbers to attack and retreat and block and stuff. In fact, the differences between En Garde and Flash Duel's basic game play are very subtle. A slightly shorter board and some tiny rules variances fix every issue I had with En Garde, and even without the character abilities, this becomes a much better game.

The cards in the standard game are nice, but the deluxe game features components nicer than nearly anything else you'll find. The box is wood, victory coins are engraved wood, and the board is actually mounted on wood. It's fun just to hold the box. The pieces are so great that you may find yourself looking for an excuse to play Flash Duel just because it's so much fun to put on the table.

To illustrate how much I enjoy Flash Duel, I'll use purely anecdotal evidence. I played En Garde exactly as many times as were necessary for me to write the review, and I haven't even looked at it since. By comparison, I've played Flash Duel five times in the last two days, and I keep pestering my kids to play it with me again. It helps a bunch that you can finish a whole game of Flash Duel in about ten minutes, meaning that I can break it out, play a few games, and put it away again before my wife gets home with the groceries.

Now, this is one time when I don't want every reader to just go out and order a copy of the game. If you're not in the mood for a light, quick game with a campy theme, you won't like this one. It's great for two players with very little table space and not a lot of time, but there's no way you're going to love it if you're a deep thinker who can't enjoy anything that doesn't require the kind of planning skills commonly associated with air traffic controllers or economic theorists. If games were food, and Through the Ages was a ten-pound brisket, Flash Duel would be a mouthful of whipped cream.

But now that the obligatory cautionary statement is out of the way, I'll come right out and gush. Flash Duel is really fun, and I plan on keeping it handy any time I have people over for games. If you get the deluxe set and the regular set, you'll be able to have both players using the same characters, if you want. I'll have no trouble talking my kids into a quick game now and then, and if Flash Duel ever gets put away in my office, it won't be there long. I anticipate playing this game until the pieces wear out, and since it's made out of freaking wood, I think that's going to take a while.

Pros:
Quick and fun
Fair amount of depth, especially with the characters
Easy as hell to learn
Top-notch production values

Cons:
Not much meat on this one (but still more than you'll find on En Garde)

If you're in the mood for a quick and easy game with some neat tactical play, you can go here and pick up either version of Flash Duel:
http://www.sirlingames.com/collections/flash-duel
Posted by Matt Drake at 7:13 PM

Pretty dang impressive that they offer the nice deluxe version, the regular version *AND* a print and play version. Sure makes it seem like the guy really likes they game and wants to get it out there any way people want.

This might be a good game to ask for on a birthday or Christmas from a cheap or less well off friend or family member.

"And the rules are simple to read and understand. They're short, and if you've played Knizia's En Garde, they'll make sense almost immediately."

The rulebook (rulesheet?) is actually my only complaint about Flash Duel. Not the rules, the rules are fine, but he kind of left one of the rules out of the book. It doesn't have a section that says, "When a round ends, repeat Setup steps two, three, the second version of step four, and flip all character abilities face up again."

You can deduce this from other rules (Time-Out, Special Abilities, and Setup) but for those of us who never played En Garde it would have been nice to just have it spelled out. So yes, the guide is short, but just a little too short.

I have a lot of fun with the game as well. I've introduced two people to it and so far they've both liked it. Sadly being two player means its harder for me to pull out when I have friends over.

My only other major gripe, which I informed the designer of over his website and in a review on BGG was the packaging. I purchased the deluxe version because I like wood. However since I live in a humid area (Southern US) and the box's top lacks a latch of any kind, contents spill out easily within some kind of string.

Also at times there are still non-obvious timing rules. Like Greyweather, I feel the game could have benefited from a longer rules sheet. Perhaps printing on the backside an FAQ or a longer description of abilities because some rules and timing conflicts can occur.

But otherwise an awesome game. It has led me to go ahead and purchase the next game in the series, Puzzle Strike.