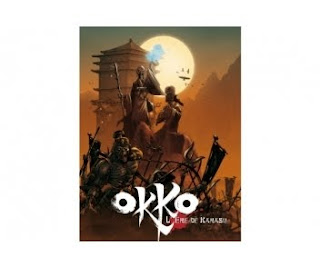 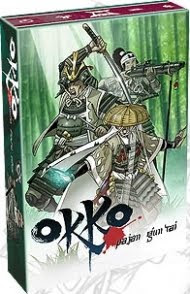 Before I start reviewing the smokin' hot expansions for Okko, allow me to direct you to this review of the original game:

This review of the original game.

There, now you can go there and read about how fun it is to play Okko. So with that out of the way, now I can tell you how much better the game is when you add in the expansions.

Now, one caveat is necessary up front - I don't have the first expansion. I have the second and third, and I'll be pestering my contact at Asmodee for the first one, because now I'm addicted to the game and suddenly have collecteritis (you know what that is, it's when you have to have every part of a game, even if you hardly ever play it, and even if you won't ever use the part you got off eBay for 75 bucks). In fact, I also need to go see if there are promo pieces or anything for the game, because I'm going to need those, too (but probably not the minis, because the best cure for collecteritis is expensivexx, a drug created by making something so costly that the only way you'll ever own it is if you mug a wealthy nerd).

The base game for Okko is just the beginning of the addiction. You can buy it pretty damned cheap - I saw an eBay copy for $25 when I was trying to find a set of the miniatures - and you'll definitely get your money's worth. It is a very good game, even if you don't have the intensely awesome expansions. But if you really want to get hooked (and you know you do, because of how much you hate having money), you should pick up Era of the Kerasu.

Okko: Era of the Kerasu is expansion #2, and it mostly adds sorcerers. But it also adds a lot more, like a bad-ass executioner guy who can kill demons in one hit, and some cheap undead who suck, but come in packs. If you want a swarm army, this is how you get it. Plus there are six more boards, so you can create really big maps (which would make the game totally blow), or just have fights in a lot of different places. For those of you who like it dark, one of the boards has a battleground with a dead horse on it. The horse still has a spear in him. That's pretty gross, by the way, but it definitely lets you know that you're not playing some limp-wristed family game about raising potatoes. There's a body count, so you're playing a man's game.

The sorcerers are fantastic. They're not overpowered (especially because both sides can get them), but they have some incredibly handy abilities. For starters, they can reroll your inspiration dice. If you've played this game, you know exactly how excellent that is. For those of you who have, for whatever reason (I blame senility) not played Okko, those inspiration dice are often the difference between hitting your enemies with swimming pool toys and stabbing them so hard their kidneys fall out. So that makes sorcerers pretty cool, even if they couldn't summon elementals. But they can.

Yeah, that's right. They summon elementals. I had to say it twice, because it's that brilliant. You can even get in a sort of bidding war with your elementals, where the evil sorcerer summons a water dude who looks all green and gross, then the good guy sorcerer calls up a water dude, which steals it from the bad guy and makes it cute and a little tubby. You can control these kami (that's what the elementals are called, because the game takes place in Pajan, which is like Japan, except totally different). You can make them punch people, which is pretty cool, but you can also make them fly up close to your enemies and explode, which has an ugly tendency to kill the guys on the other side. And that's pretty damned awesome, if you ask me.

The stuff in Era of the Kerasu makes Okko, which is a wicked awesome game to start with, into a game with an addiction risk on par with heroin or potato chips (for the record, I am not addicted to heroin, though the verdict is still out on potato chips). And in case you weren't entirely hooked yet, the third expansion (called Pajan Gun'Tai, which probably means something like 'People from Japan if Japan was spelled incorrectly' but sounds more like a Number Eight with fried rice) will set you well on the path to needing an intervention and a twelve-step program.

Pajan Gun'Ati is a little mini expansion. It has ten dudes and four equipment cards. But the characters are simply fantastic, from the soldiers flying their battle standards that help everyone around them, to the ambassadors who grant extra inspiration dice (because they're civilians) and have special powers of sucking (OK, that's not that fantastic. But they're cheap, and they also have some powerful support abilities). They're all mercenaries, which means they'll work for either side, and if used properly, can really turn the battle around. But most importantly, they give you a lot more options for building your team of ass-kickers, and the more you have available, the more fun it is to play Okko.

If you don't already have Okko, you should get it. Play it first, and if you like it, get the expansions. If you do already have Okko and you like it, you should definitely get these expansions, because they make a game that is original, creative and fun into a game that is original, creative, fun and pure concentrated awesome. Okko is so addictive, I'm considering stealing money from my mom. Not that I need the money - everything about this game is affordable (not counting the miniatures, which may require you to turn to prostitution). I was just going to get some drugs to help me with the withdrawals, in case I can't find someone to play.

Pros:
Very cool art (though the board tiles are still too dark)
Makes a great game into cardboard cocaine
Adds new layers to the game without adding complexity
Quite affordable

Cons:
Still cardboard standups and flat board tiles
May be habit-forming

Dogstar Games is carrying the base game and the first expansion (yeah, the one I don't have), but I'm still sending you there because they'll get the rest eventually.

Dang it, Drake! Now I want the expansions!!

"Because it's not a man's game until somebody dies." ~Matt Drake

Because of this review, I went and picked up the original and all the expansions from Asmodee at Origins, plus all the minis too.

After winning the Okko contest and receiving one of everything they ever made for Okko, including the miniatures, I am really hooked on this game as well. So much so that I went and built a board for it to use the minis on.

The best way I can summarize this game is if Jack Burton came to my house and said "This is Jack Burton on the Pork Chop Express and I got a Six Demon Bag here that says you ain't man enough to play a game that is 6.9 on the Richter scale. Get it?"

To which I respond: "Shut up, Mr. Burton! You are not brought upon this world to get it!"

And then I karate chop him in the face while my sorcerer slides down a pole of electricity and zaps his ass with lightning.

I roughly quote Big Trouble in Little China, because like that movie, this game is awesome wrapped in crack.

By the way, you got to get the Yakuza expansion. Its the same thing as the Pajan Gun' Tai expansion for the most part component wise but the added equipment is really nice to have.

A lot of effective data for myself!