Before I get to this review, allow me to apologize for being two days late. I had every intention of doing this one on time, but was unexpectedly afflicted with some sort of debilitating illness that required me to be a maximum of thirty feet from a toilet at any given moment. I spent most of my weekend either in bed or in the bathroom, and hoping desperately that my body did not confuse the two. More details, I believe, are not required. Or probably desired. So I'll just jump to the review. 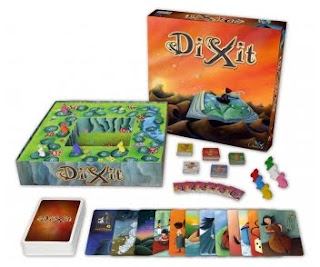 I’m pretty sure recreational drug use is legal in France. I have no actual proof, and have done absolutely no research whatsoever to corroborate my assertion, but I have considerable evidence that it’s true. Exhibit A: Dixit.

In my several years as a game reviewer, I have played some very odd games. There’s one where a retarded, myopic giant gives small children multiple contusions because he thinks they’re fish sticks. Or the one where you have to collect cookies and milk before your opponents can get peace and love, and the rules change every two minutes. And those are odd, and I happen to know for sure that at least one of those is made by people who smoke some serious wacky tobaccy. But for sheer proof-of-stoned weird, I think Dixit takes the cake. It’s also proof that games don’t have to make sense to be fun.

Dixit is basically a family-style party game, but only if you have a small party, because it maxes out at six. This is definitely a case where more means merrier, but you can play with as few as three, if you’re having trouble rounding up gamers with a healthy appreciation of the bizarre. You’ll each get a hand of cards with pictures on them, and each round, you’ll take turns establishing the theme.

If you’re the leader, you’ll pick one of the picture cards in your hand and, without showing it to the rest of the group, say a word or phrase that you associate with that picture. You can even sing or hum or make a sound, if you’re feeling particularly extroverted. Like if you have a picture of the rabbit knight looking at three mismatched doors, you might say, ‘lady and tiger,’ then set your card face down. The other players will each try to pick a card that matches what you said, and that they think will fool everyone else.

This is where it gets weird. All the cards have art - no words or anything, just a seriously psychedelic painting that may or may not be the product of a heroin bender. If they had the kind of art they used to put on pulp magazines, with guns and masked vigilantes and chicks about to fall out of their clothes, that would be one thing. If they had naked girls like you might find on a deck of playing cards you could pick up at a Tijuana gentleman’s club, then it would be awesome, but you couldn’t really play it with your family without giving Child Protective Services a good reason to open an investigation. But instead, they have stuff like horned snails playing football and a night sky full of random letters, and one card where a man made of leaves wanders around black sand dunes. I couldn't make this stuff up - at least, not without illegal narcotics, or at least some a couple bottles of NyQuil.

The scoring is great, though. This is where Dixit quits being Apples to Apples on peyote and turns into a really fun family game. After everyone has picked a card, the leader shuffles them and flips them up so everyone can try to guess which one was his. If you guess right, you get points. If someone guesses your card when you’re not the leader, you get points. The leader gets points for every player who guesses his card, unless everyone gets it, so he can’t make it too easy or he’ll just wind up watching everyone else scoring off his stupidity.

I swear I'm not exaggerating about the oddness of the art on these cards, but at the same time, it is strangely charming. Bright colors on whimsical illustrations give the whole game a sense of wonder that defies logic and linear thinking. The art is crazier than Lyndon LaRouche, but it's a lot of fun to let your mind wander and just come up with stream-of-consciousness ideas that make it all work.

Dixit is not a strategy game, or a tactical game, or a game where the smartest player always wins. It's fun and charming, and it's a great way to spend an evening with your family. Because the art has a childlike break from reality, it is entirely likely that an eight-year-old will beat you, which is kind of important in family games, anyway.

Cons:
Clearly, hallucinogenics were involved (that may not be a con, depending on who you ask)

If you can live without all the strategy and maneuvering and tricky plays that make you play all those other games, Dixit is a great game to play with your family. Adults might dig it, too - though they may want to drink first. You can find it here:
http://www.trollandtoad.com/pd2634682.html
Posted by Matt Drake at 7:34 PM

sounds like another great game I need to get for my crowd :)!

wow great i have read many articles about this topic and everytime i learn something new i dont think it will ever stop always new info , Thanks for all of your hard work!

Hello, i would like to read more about this interesting topic, i think that it has good information, besides, this post help in a personal project

I think that this review is wonderful,I would like to have the chance of read more about this game!