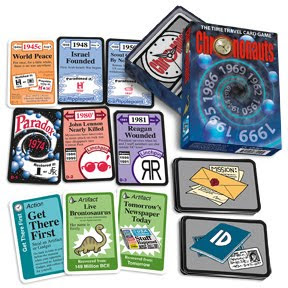 If you could go back in time, would you stop Lincoln's assassination? Would you save the Hindenberg? Or would you just go back and tell Dustin Hoffman not to make Ishtar?

In Chrononauts, each player is a time explorer separated from his timeline. You might be from a timeline where we signed a Vietnam Peace Accord and legalized weed, or where Wilson kept the United States out of World War II and Martin Luther King became president. So one of your goals is to get back home, by manipulating events to bring about the history you remember.

Of course, just fixing time would be too easy (that's not exactly an 'of course' situation - I would think it might be difficult to fix time, but I guess it's not that bad. It worked in Time Cop). So while you're traipsing around, throwing time all out of whack and bringing about the apocalypse, you're also supposed to collect artifacts, like the Ark of the Covenant or the Mona Lisa. Get the three artifacts you're supposed to get, and you don't have to worry about getting home any more. I guess you don't mind being stuck in an age where John Lennon makes a Beatles reunion album if you have the creation of the universe on Betamax.

The timeline cards are all laid out in order, with symbols that indicate what events become paradoxes if specific lynchpin events are altered. Like if Hitler is killed in 1936, then Germany never invades Poland, D-Day never happens, and Isreal is never founded. But then your parents never met, because you grandfather was an American G.I. and your grandmother worked in a Paris brothel, and just like that, you've got a paradox.

To fix these paradoxes, you have to patch them with other events that also never happened. For instance, if Al Gore wins the recount in 2000, then Obama never gets elected, creating a paradox that can be fixed by rigging it so Sarah Palin becomes the first woman president. And if you get hit by a car in your mom's driveway, you have to arrange for your dad to beat up Biff at the school dance. You also have to play Chuck Berry.

As the game progresses, more and more paradoxes will be generated, which is sort of good because you can patch them to create your own alternate future, and sort of bad because they could unravel the fabric of the universe. So there's a bit of a downside. Also, if you screw up enough stuff, you set off nuclear war and blow up the world. Also a downside, unless you're actually trying to get back to a timeline where the world died in 1962, probably so you can hook back up with Cable and Bishop.

This is the best Looney Labs game I've played so far, which is kind of ironic, because it's also the least attractive. The art may be weak, but the game is brilliant. It ends in about 20-30 minutes, and it's so fun that you'll want to shuffle up and play again. There are so many different things going on all the time, with opponents grabbing dinosaurs and you helping to set up David Koresh's outreach ministry to the poor and time fracturing into a thousand pieces. You'll want to keep track of which opponents are grabbing up all the artifacts, and while you want to patch the timeline to get extra cards (and prevent the disentigration of the universe), you also don't want to get guns banned in the United States and send your hippie opponent back home.

If you're a sucker for pretty games (like most of us), Chrononauts isn't going to be your new favorite, because it's just not very attractive at all. But if you like a smart, fast, amusing game, you'll probably get a kick out of Chrononauts. It has several expansions, too - while the main game starts around 1900, you can get another set where you can make the South win the Civil War, and another set called The Gore Years where you can stop the World Trade Center attack or capture Osama Bin Ladin (though not in the same timeline).

Chrononauts surprised the heck out of me. I mean, I've figured out by now that Looney Labs makes some pretty fun games, but Chrononauts is a much more serious game than anything else I've seen from them. It might even be possible that in an alternate past, Andrew Looney turned down his first joint and decided to make some serious games, and then just made the one before the paradox was fixed at a college free-love party where he got a mad contact high. Whatever the case, we now have Chrononauts AND Stoner Fluxx, so I'm pretty sure the drugs came in somewhere.

Pros:
Deep and involved
Plays fast
For the first time in a Looney Labs game, you can plan several turns ahead
Different ways to win, but none of them are easy

I think Chrononauts is a hoot. If you want to try it, you can preorder the reprint right here:
http://store.looneylabs.com/Chrononauts
Posted by Matt Drake at 6:25 PM

Is this game focusing on American history? I mean: me, as an ignorant italian, can i catch the paradoxes as they're "univerals" or have i to know who was that american that have done something in that site in the USA?

No, it's absolutely American history. Some of the stuff is world-level history - Hitler, WWII, stuff like that - but other stuff, like presidential assassinations and Pearl Harbor, are decidedly American. Basically, the history happened to all of us, but this game approaches history from an American point of view.

However, you don't actually have to know the significance of all the events to enjoy the game. You could be a complete ignoramus and still have fun. Knowledge of history is completely unnecessary (at least, in this game - in real life, it's very important).

Is the stuff like weed and brothels you mention in the review actually part of the game or just a part of your review? In other words, how family friendly is the game?

There is a patch for a paradox that says, 'Marijuana legalized.' The brothels, on the other hand, were my personal wishful thinking.

This game sounds wonderful - any game where we can get weed legalized in America is a great game in my book. The time frame is ideal for me since I like 20 - 60 minute games.

This is the only timeline in that movie worth watching..