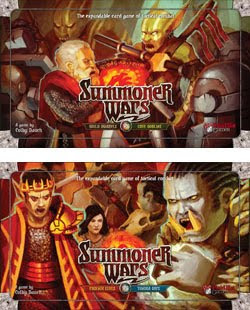 Tonight is a great night. I've been looking forward to writing this review for nearly a year and a half, and finally, after all the waiting, I get to reveal one of my absolute favorite games. It's called Summoner Wars, and it was the best game I played at GenCon 2008. The reason you haven't heard of it before now, however, is because you can't buy it yet.

Yeah, OK, that's a little confusing, so I'll explain. The guy who made Summoner Wars is a good friend of mine. He has done a ton of work for Hasbro, including several projects I'm not sure I'm supposed to tell you about (I think they involve regular Langley contacts and maybe a secret black list). He's been refining Summoner Wars for something like two years now. The first time I tried it was two GenCons ago. He broke out this set of home-printed cards with art he cribbed from a video game and said, 'hey, wanna try my game?' It was so much fun, it was all I could think about for the rest of the time I was there. I got to play it again at GenCon this August, and was amazed at how much it had improved. Considering the original was my favorite game of GenCon 2008, I was damned impressed that it was so much better a year later.

At its most basic, Summoner Wars is a tactical card-based game where you try and kill the other guy. You have one leader, your summoner, and if you lose him, you lose the game. He calls up his troops, grunts and warriors and heroes and the stuff of legend, and they run amok causing bloodshed and mayhem. So this is the kind of game men play (but women can totally play, too).

Where it gets amazing is the incredible amount of tactical decision-making and strategic planning that goes into the game. Every fighter has some kind of special ability that breaks the rules, so they might run faster, or hit harder, or go out of turn, or otherwise just be irritating. You have a grid where all the action occurs, with each card-slash-warrior moving a few spaces, hitting hard, and hoping to live through the next turn. It's like one of those reality shows on Bravo with the fashion designers, only instead of breaking down in tears and acting all gay when they get sent home, the soldiers on this field just die. So it's approximately 273 times more entertaining, with an added plus that you don't actually get dumber when you play.

Summoning your brawlers isn't as easy as just plunking down a warrior and saying, 'there he is. Bite me.' In order to bring in your troops, you have to spend cards from your magic pile. And in order to have troops in your magic pile, you have to either kill enemies (their deaths power your spells) or dump cards from your hand. Some decks can drain your opponent's magic pile, or improve your own, or make your own guys cheaper to summon. You'll almost never have enough magic to summon everything you want.

Deciding what to do on your turn tends to be a matter of limited resources and too many objectives. You want to crowd the enemy walls to keep him from summoning, but you also want to protect your summoner. You want to keep a constant supply of cards in your magic pile, but you also want to hang on to those game-breaker cards that can turn the tide, even if you don't have enough power to make them work just yet. You can't play too offensively, or you'll leave your summoner wide open, but you also can't let your opponent have the run of the field, or he'll set up such a tidal wave of brutality, it will look like a Mortal Kombat fatality move. You'll want to keep a careful watch on both sides, both to make sure that your opponent isn't setting up an ambush, and to take advantage of opportunities to set your own.

It may sound a little like this is just a new CCG, but it's definitely not. For one thing, when you buy both starters, you're getting all the cards there are. For another thing, you need the cards to tell you what you're summoning, and track hits and stuff, but once they're on the board, they act more like miniatures than any game of Magic: The Financial Raping. They move around, stab each other in the man tackle, and shoot each other from a distance. There's a definite card play aspect to Summoner Wars, but it's more of a tactical maneuvering game than a card game.

The first release of Summoner Wars is made up of two boxes, each with two decks. You can play Phoenix Elves, Tundra Orcs, Guild Dwarves or Cave Goblins. Each deck has its own play style, complete with advantages and disadvantages, but after two years of testing, they're all very balanced against each other. Will you swarm your opponent with goblins, or take quality over quantity with the dwarves? Do you take unreliable raw power with the orcs, or employ the rather expensive precision of the elves? Knowing the decks is a decided advantage, but even a new player can win, if he is cautious and smart.

Now, the astute reader might wonder how I can be objective when the creator of Summoner Wars is a friend. And while most of you don't know me from a hole in the wall (and some of you might actually prefer the hole), I can point to more than one review where I beat the crap out of a game made by a friend. Hell, I've panned two games from Small Box Games, and that guy shared my booth at GenCon.

I know I've been handing out a lot of high praise recently, and I hope to find something soon that really stinks so I can compare it to dirty feet or loose bowels. For now, you'll just have to read about how much I adore Summoner Wars. And you'll want to go put in your preorder right now, because by God this is one of the best games I've played in a long, long time - I mean like Heroscape good - and you'll want to have these in your hands as soon as you can. Plus your preorder gets you the promo. You know you're a sucker for the promo.

Cons:
May be addictive

You can preorder yourself some Summoner Wars right here, and if you like games, you should:
http://www.plaidhatgames.com/store.html
Posted by Matt Drake at 5:13 PM

Summoner Wars is an awesome game. Plaid Hat Game really hits it out of the park with their first release.

I was privileged to get to preview this game, and I cannot wait to get my hands on the production copy!

I had this game under my scope for some time but wasn't sure about it, glad you reviewed it :D

BUT I won't buy anything until my copy of Chaos Isle arrives, I live in Italy so it will take A LOT.

Jesus! First Chaos In The Old World and now this sweet temptation; you'll be the ruination of me. Oh well! Time to steel myself and prepare the credit card for another unexpected licking (or flaming, as it is directly attributed to you).

Any chance of seeing some screenshots of this game?

I ordered both sets. Can't wait until they arrive!

James, there are a bunch of pictures on the BGG page: http://www.boardgamegeek.com/boardgame/58281

I agree that this is a clever game that fits the - easy to learn, but gets better the more you play it - catagory.

Got it. You were right, great game.