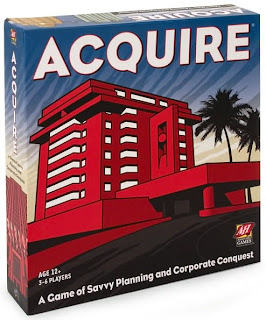 Reviewing old favorites is a little like driving a bulldozer through a field full of bunny rabbits and orphans - you're almost guaranteed to piss off someone. Acquire is an old standby favorite, reprinted by Avalon Hill several years ago, and stands to this day as one of the great Sid Sackson games ever made. Opinions on the game tend to vary from 'man, I love that game' to 'I think I'll pay $200 for one on eBay'. Reviewing a game this time-tested and sacred tends to summon the rabid fans who come out with pitchforks and tar if you make the slightest mistake, and because it has been played by so many gamers, you also get the people who want to prove how far off the beaten path they are by telling you that you're an idiot if you liked it.

For the sake of the metaphor, I'll call the Acquire fanatics 'bunnies', and the it's-cool-to-hate un-fans as 'orphans'. And I'll try to hit them both with my metaphorical bulldozer.

Acquire, for those readers who have only been playing games for the last twenty minutes, is a highly abstracted game of corporate takeovers and high finance (unless you get the version with hotels, in which case it's an abstract game of hotel takeovers and high finance). The growth of various corporations is represented by a numbered grid, and as you play, you place plastic tiles over those numbers. Place two of them next to each other, and you form a corporation. Place a tile so that it links two corporations, and the bigger one swallows up the smaller one.

The key to making money in Acquire is to buy, sell and trade stock in the existing corporations. When a corporation gets eaten up by another corporation, the players with the most stock in the now-defunct company get buyout bonuses, and anyone with that stock can dump it to get money or more stock in other companies. Placing tiles properly is important, but to really excel, you have to be able to manipulate stock prices and make smart investments.

There's quite a bit of strategy and long-term planning in Acquire, and you have to be able to recognize where you're likely to make money. It's fast-paced and cutthroat, with the constant temptation to get in over your head or get tied up in a no-winners bidding war. Many decisions you'll make as you play can get you so far behind that you'll be out of the game, yet very few of those decisions are so decisive that you'll shoot past the competition. It's tricky and really fun, and while it's easy to suck, it's hard to be brilliant at it.

And that's kind of the downside. A mediocre player can be shut out fairly easily by more skilled players, which is a mixed bag. On the one hand, I do prefer games where the better player wins, but on the other hand, new players could be completely disgusted when they go the whole game holding a huge pile of nearly worthless stock that tied up all their finances while the experienced players swim in money like Scrooge McDuck. I'm not opposed to games where people get knocked completely out, but it does kind of suck to be so far behind that you've got a snowball's chance in Hell of winning, but have to keep sitting there the whole time, anyway.

I'll be the first to admit that the reason I know about this particular 'flaw' is that it happened to me. I made a couple really short-sighted stock purchases and it cost me, big-time, because I was broke for the rest of the game. It's not hard to fall into that trap, though, especially if you haven't played Acquire a lot, and it really does diminish the enjoyment you can get out of a game when you know you can't win, but you have to stick around and see who gets to laugh at you when the game is over.

However, even if you are the guy who spends his first three turns ruining himself for the rest of the game, Acquire is still a lot of fun. It is a very fast, very fun game with lots of chances to bluff, plan, and make quick decisions. It's not hard to learn the rules, but it's got incredible depth, especially considering how simple it is to pick up. And talk about staying power - the first version of the game was released in 1962, and it still gets played today. That's the kind of longevity you see in Monopoly, except without having to roll dice all day long and grumble about having to be the shoe.

Acquire isn't a perfect game. The tendency for a weaker player to take himself completely out of the running could make a lot of gamers happy to avoid it. But it is an incredibly good game, it moves incredibly fast, and is a ton of fun, so if you've ever played and said, 'man, did I suck,' give it another shot. And then, if you still hate it, you can write me a note that says, 'I still suck.'

Cons:
Player elimination that means you can't win, but you still don't get to go see what's on TV

I have good news - Dogstar Games has Acquire. In case I don't drive this home often enough, they provide the review copies that let me tell you about stuff like Chaos in the Old World, Space Alert, and other games from publishers who won't return my emails any more. So if you want to pick up this really great classic game, go get it right here:
http://www.dogstargames.com/product/WOC221920000
Posted by Matt Drake at 8:15 PM