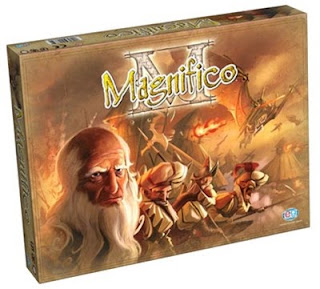 At first glance, you might look at Magnifico and think, 'oh, great, another Risk clone.' But that's like looking at RuPaul and thinking, 'wow, that chick has great legs.' Sure, there are some things in common, but the differences are a lot more important than the similarities. I'll let you decide for yourself if you think I'm talking about Risk or RuPaul.

Magnifico has players taking the helm of upstart nations attempting to subjugate Western Europe at the beginning of the 16th century. Only instead of just raising armies and shooting people with archaic weapons, you buy designs from Leonardo da Vinci and use his wacky, ahead-of-their-time inventions to grind everyone else under your fruity Renaissance comfortable footwear. Tanks, cannons, submarines, and airplanes are just a few of the nifty devices you'll use to run roughshod over everyone else.

I admit, that sounds like Risk: Old Europe. But it's not. That's just the jumping-off point, and there's so much more in Magnifico that if you sit down thinking you're playing a new twist on an old classic, you're bound to be disappointed. Magnifico is as much a game of managing limited resources, blind auctions and long-term strategy as it is a military simulation. If you want to simply enjoy a conquest game, I can recommend a bunch - but this one isn't it.

For one thing, you don't spend your money to just hire more troops. Every turn, you can recruit one soldier in any place where you already have at least one soldier - and that's it. I guess since the television isn't invented for a few hundred years, you can't blow all your cash on a Super Bowl ad to recruit for the National Guard, so instead you have to just grab whoever is passing by the office that day and give them a uniform and a really awkward firearm.

However, you will spend a lot of money. You need money to win the auction for first player, then you need money to buy the inventions and art from da Vinci, then you need money to build them. You also have to pay money every time you want to attack someone, and so if you blow your entire pile of cash on the Mona Lisa and plans for an armored sailboat, you'll sit there like a Quaker your whole turn. Maybe you can earn a little more money churning butter or something, because you're certainly not going to be doing any fighting.

The money part of da Vinci is a critical reason this is nothing like Risk - but there are other good reasons. Take combat - you can only start three fights in a turn, so you're not going to just plow through the opposition in a single turn. And that's good, because if you go in prepared, it's almost impossible to lose a fight as the offense. As in, the defenders will probably lose every single one of their guys, and you'll walk in unscathed. But then if you don't ramp up your defenses to an unreasonable degree, they'll just come sailing back in and kick you out again.

You can't play Magnifico defensively. There's no hiding in Australia while everyone else dukes it out. You can build castles to improve your defenses, but if you don't staff them properly, they'll just change hands when your opponent (who obviously has more balls than you do) kills all your guys and steals your castle.

While we're talking about stealing stuff, you have to be really careful with those magnificent inventions. When all your guys die, your tanks and planes don't. Instead they now belong to the bastard who just drove a 16th century Sherman right up your ass. They're his planes and tanks now, and he's going to use them to hit you again.

There are some wacky, seemingly unbalanced factors at work in Magnifico, and for the first half of your first game, you might think it feels like it was invented by a tenth-grader during study hall. You'll find yourself asking, 'Why do I lose a guy every time I set sail?' and 'Why can't I hire more soldiers?' and 'Do you like me? Check yes or no.' In order to really appreciate Magnifico, you have to come at it from a non-standard point of view.

And if you can manage to put aside everything you expect from Risk or Dust or Attack! or any of a huge array of other global conquest games, and just let Magnifico be what it is, instead of what you think it should be, you'll find that there is a really good game here. It's aggressive and fast, tricky and deep, and pretty darn easy on the eyes. You can win the game with a good attack strategy, but you can also win by making stuff. You can win by sponsoring art, and you can win by holding castles. This isn't a run-of-the-mill land grab.

In fact, Magnifico is a very fun game, and while I don't know that I would put it onto the 'never sell this game because I'll play it all the time' pile, it's certainly on top of the 'play this the next time I get a chance' pile. It's got an unexpected mix of European and American gaming. It kind of sneaks up on you, but it's an awful lot of fun once you get into it.

And that's not something I can say about RuPaul.

Pros:
Turns are fast - a big game that plays in less than 3 hours
Fun, funny art
Tons of depth
Plan ahead or lose badly

Cons:
Not at all what you expect
You may not get it right off... or at all

I really liked Magnifico, but it sure wasn't what I thought it was. If you can clear your mind of the Risk clone notion, you might be very pleasantly surprised. You can get it here:
http://www.gameoutfitter.com/product-p/asm%20mag01us.htm?gclid=CKedqsPAjJ4CFQEhDQodpxexpw
Posted by Matt Drake at 11:02 PM

LOL at "the fun into" RuPaul (yeech)!