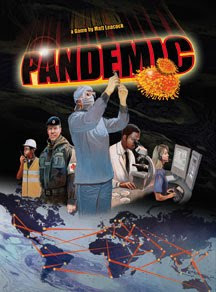 Every now and then I like to share my dream for world peace, so that people know I'm really just an idealist. See, in my perfect world, my idyllic future, terrible disease wipes out humankind until there are only like eight of us left. Terrible disease could be replaced by a zombie apocalypse, but only if the zombies get tired after a couple weeks and go back to their graves, so that those last eight people can get out and use the bathroom.

Apparently, I'm not the only one who thinks about stuff like this. Somebody went and made a game about this peace-on-Earth scenario, only in this one, you're actually trying to stop everybody from going tits up. Go figure.

Pandemic is a cooperative game, which means I at least wanted to try it. I like cooperative games. It's awesome when you can play a game with people you like and get that social interaction and brain-churn as you try to choose the best move, and yet you don't have to make anyone cry. If you're playing with weaker gamers, you don't have to feel guilty about giving it your best shot, and if you're playing with people who takes games too seriously, you can kick them in the wiener and tell them to lighten up, because it's just a game (granted, you can do that with any game you're playing, and probably should).

So in Pandemic, four different diseases are breaking out all over the globe. They probably have terrifying scientific names, but in typical Big Media fashion, they just get colors - red flu, yellow stars, green moons... hold on, that might be a breakfast cereal. Whatever, there are four colored diseases and you have to cure them before the world is consumed by disease and you all die from purple smallpox.

Every player gets a different character, and each character has a different special ability. The key to winning Pandemic comes in using your ability to facilitate better moves for everyone else. One guy can run around the globe setting up research stations so that the other players can move faster, which will help the dispatcher who moves people on his turn instead of theirs, which in turn helps the guy who has to already be in Hong Kong at the start of his turn if he wants to be able to give his research to the scientist, who can then stop the black toe fungus from destroying the Pacific Rim.

You'll wander around the board, trying to get the cards you need to travel faster and cure white acne, working to beat the clock, because if you run out of cards or the diseases get too out of control, you lose. And in the meantime, every turn, you have to do something bad, which generally means a lot more people get sick. Hopefully, as the game progresses, you'll be curing some of those diseases so that they don't end up overtaking North Africa while you're all bouncing around between North American cities trying to figure out how to stop the pink shingles, but at the start, it can be awful hard to keep up with all the outbreaks.

I did mention that I like cooperative games, but they do often come with a considerable downside - the know-it-all, fun-killing jackass. This is where one guy, presumably the guy who believes he is the smartest person at the table, tells everyone else what they need to do on their turns. Pandemic is the absolute worst offender for this syndrome that I have ever played, unfortunately, because to win, you'll need to plan a seriously complicated series of moves five turns out, and then execute them flawlessly. Plus you have all the time you need to make your plans, so you could wind up with one guy saying, 'So if you move to Brazil and trade a yellow to her, and then she moves to Paris and waits, then I can send this other guy to Milan on my turn, which will allow him to treat the brown bunions in London before he picks up the cure to yellow dermititis.' After a full game of being bullied for an hour, everyone else at the table is likely to have their own response, which will sound like this:

'If you get up and go to the refrigerator, then I can kick you in the ass, and she can stab you with a tuning fork, and the other guy can send you screaming to the Hell you so rightly deserve.'

That's not the only downside, either. While I did find Pandemic to be tense and exciting and interesting, it also has an element where you're doing the same thing every time, and just trying to shave one or two cards off your previous attempt. I know a lot of people love this game, but I can't see playing a whole lot of times. After a point, you pretty much understand how the dynamics of the various characters work together, and it's just a matter of time before you're performing by rote memory. My son completely lost interest after two games; I could play a few more times, but I wouldn't be interested in making Pandemic the cornerstone of my game group.

However, if you're able to play with a group of like-minded gamers who understand the game, and you aren't terribly averse to fairly repetitive game play, Pandemic is a remarkably good game. The challenge of planning out multiple actions and complex turns combines with an escalating sense of urgency as the countdown to Armageddon ticks closer, until you're immensely proud of yourselves when you finally cure orange crush and win the game.

I suppose there is one more downside, if you're me - if you all do a great job, you actually prevent my ideal world peace scenario. Humanity makes a comeback, and the next thing you know, the world is afflicted with cell-phone ear and garbage yard, which can only be cured with high explosives and a flamethrower.

Pros:
Intense, action-packed cooperative game
Every decision matters, and every turn counts
Very flavorful - the theme comes out in spades

Cons:
Huge potential for the Mensa asshole to tell everyone else what to do
Good possibility that it gets repetitive

Pandemic is definitely a fun game, especially if you can get past the potential problems. If you like cooperative games - and can really cooperate, instead of all doing what one mouthy jerk tells you to do - you should go to Dogstar Games and order it. As an added bonus, if you buy it from Dogstar Games, then they'll be all grateful and keep sending me the games you want to see reviewed. You can get it right here:
http://www.dogstargames.com/product/ZMG7021
Posted by Matt Drake at 11:25 PM

Bravo on a boffo review. The Asshole is why I hate co-op games and avoid them like a Pandemic, but I bought it to play solo... so the only asshole turns out to be me.

Perfect! If you're the only asshole, you're not even obligated to kick your own ass!

For co-op games, I just played Arkham Horror today (review coming next week), and it completely defeats the Lead Asshole factor. So does Space Alert.

Did you find Pandemic to be incredibly difficult? The game was very fun but practically un-winnable in a 4+ group to me. Maybe I'm just not smart enough for it =/

Great review, Matt. You're spot-on about the asshole factor, but I think you underestimate the replayability. I've probably played somewhere between 20 and 30 games of Pandemic now and still love it. Here are some of the things that keep it fresh:

1) Each game you have a different combination roles, which makes it difficult to come up with a rote strategy. No medic? Well, forget about pursuing eradication. No researcher? Well, I hope you have the dispatcher because exchanging cards just got much tougher. No matter which roles we deal out, we always feel the pinch of the ones we're missing.

2) Since the initial set-up is randomized, each game plays differently. Sometimes you have a pretty even distribution of diseases in the initial set-up; sometimes they are clustered close together with a real danger of a cascading outbreak from the first turn of the game. Different initial set-ups demand different responses. The randomization of the infection deck can lead to pockets of high danger, or dispersed infections that burn actions for movement as well.

3) When you feel like you've figured out how to coordinate your team, you can always increase the difficulty by including more epidemic cards. You can afford to be a bit sloppy with just four epidemics in the deck, but with just five I find that even veteran players only win about half the time. With six in the deck, you need flawless coordination and a bit of luck too.

We've got the expansion, but even without it I'd be playing the base game for years. To me it's a nearly perfect marriage of simple, elegant mechanics with theme. It also tops other coops in terms of action coordination, role synergy, and game length.

I can't wait to hear what you have to say about Arkham Horror. That game is the anti-Pandemic.

Everytime I we play Pandemic here at Dogstar Gameswe all lose. Every time. And we're gamers. No... Seriously. We're gamers. But we keep dying. I know that's your utopia but... it would be nice to save the earth at least once...

The expansion, on the Brink, adds variants that boost the replayability. But that is another 15 bucks or so.