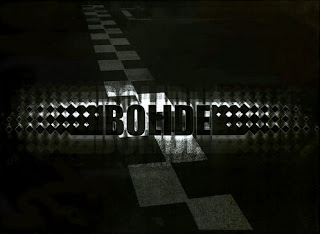 I like racing games, especially games that let me really feel like I'm hurtling through turns, barely in control of a super-powerful racing machine, shredding the tires and smoking the brakes in a neck-and-neck, hell-bent-for-leather contest of wills. In other words, I really like Formula D.

But this review is not about Formula D. Tonight's game is called Bolide, which probably means something if you're from Italy, and just confuses me because the only Italian I know, I learned from Sopranos, and so most of the words I know have to do with things you might do in the bathroom. It's a racing game very similar in theory to Formula D, in that you're driving race cars around a really big race track, trying to go as fast as you can afford without flying off the track and into the stands, where you can make some unlucky woman an instant widow.

However, aside from being a racing game, Bolide really doesn't have much in common with Formula D. Rather than rolling to see how many spaces you move, Bolide pretty much lets you decide how far you want to go, and then penalizes you if you do something stupid, like hit the gas going into a hairpin turn. It uses a rather ingenious method of simulating physics - you move your car, tracking which direction you went, and then you make the exact same move with a little pawn that tells you where you can go next turn. So if you went seven spaces forward and two to the left, then on your next turn, your pawn will be seven spaces ahead and two to the left.

The pawn indicates the center of a bunch of places you can end your next turn, but it's actually kind of a small area, especially if you're really hauling ass. Completely understanding how this works would require you to read the rules, play the game, and then read the rules again (at least, it did for me), so I'm not going to spend half an hour trying to figure out how to explain all the ins-and-outs. Instead, I'll just say that Bolide does a better job simulating the physics of speeding cars that any other game I've ever played. It's not just clever, it's downright brilliant.

That pawn thing is the heart and soul of Bolide, but there are several more rules that help to make this a really cool racing game. Sharp braking lets you juice it hard into a turn and then slow down fast when you need it, and you can hit your boosters now and then for a little extra kick, if you're feeling lucky. There are enough rules for this to be a whole game, though the poorly translated rulebook does a Godawful job of explaining them. There are even advanced rules for customizing your car and driving in the rain. It's a good game.

However, I don't think I'll probably play it again. It's terrifically smart, but it's not the fast-paced burning rubber that I love about Formula D. There's a lot of counting off spaces and calculating your move, and while it's absolute genius, it makes what should be a game about roaring engines and gutsy drivers into a careful series of calculations and long-term planning. If I didn't already have Formula D, and love the bejeezus out of it, I would probably want to play Bolide all the time, but I do, so I won't.

Plus it's a total bitch to work through the rules. As far as I can tell, the rulebook is translated into English from Italian by a Bolivian living in Japan who speaks Urdu as a first language. There are words in there that I don't even think exist in English, and if they do, I'm pretty sure he's not using them correctly. If it weren't for the pictures, I don't think I could even have played the game. I've seen some pretty bad translations, but this one is the worst.

And while the little plastic cars are cool, the tracks really fail by comparison when you put them up against the gorgeous art in the new Formula D. It's like the designers of this game wanted you to be bored. It doesn't work - I really did enjoy Bolide - but it's not for the art, I'll tell you that.

Now, to be fair, I want to be clear that I like my racing games with a heaping helping of kick-ass, with the careful planning in a cup on the side. If you really like to think about what you're doing, and you're good at working out your moves in advance, you'll probably love Bolide. I do like it, and I think it's really smart, but when I head into a turn, I don't smell the overheated engines and feel the tires slipping on the asphalt as I push just a little harder to overtake the one lucky bastard who hit a lucky upshift. Instead I smell the scented candle we just lit to try to compensate for having dogs, and wonder if I set a timer for Dexter. I just can't get into it like I do with Formula D, so I'll keep playing the game I know I love.

I like my racing games fast and crazy, and on that front, Bolide doesn't deliver, no matter how stunningly brilliant it might be.

Pros:
A physics simulation mechanic that is absolute genius
Good, well-rounded rules that let you test your technical aptitude
Virtually no luck - the best driver will win, just about every time

While I can't give Bolide a blanket recommendation, gamers who like to really think about their racing games will probably dig the hell out of it. If you're one of those gamers, you can get Bolide from Dogstar Games. And why should you buy it from Dogstar Games? Because it's cheap, you get free shipping, and because if they hadn't sent me a copy, you wouldn't have been able to read about it. So if you're going to get it, get it here:
http://www.dogstargames.com/product/RIO079
Posted by Matt Drake at 4:34 PM

"Bolide" in italians have different meaning. The "correct" one is somewhat similar to "meteor", a space thing that go really fast.
By popular use, it then means anything that go at high speed, even a motorbike or a car.

About the game, as i said on BGG, your moves will become faster the more you play it. I have not played it with more than 3 players, but when i play it with my son (with 2 cars for each) we are so confident with the game mechanics that we really "see" the cars "moving" and racing.
The art on the track is not so beautiful, but if you play fast as we do, you just have no time to look at anything else than the track grid. I've played only the online Java version of Formula Dè, but for me Bolide is much better, even for the only reason that you have no dice rolls if you don't want to take risks.