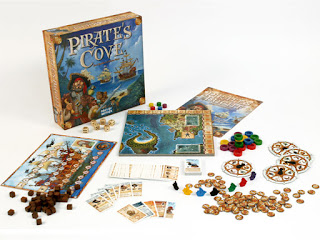 I love the old Days of Wonder games. They were like boxes of toys with rules. Since I'm just barely a grownup, I love toys, and toys with rules are even better.

Pirate's Cove is one of those old box-of-toys games. It's got fantastic pieces, gorgeous art, cool spinners, and some totally bitchin' plastic pirate ships (I believe that when you say 'bitchin', you're actually supposed to leave off the 'g'. Otherwise it just means you're a whiner). Opening the box is like Christmas morning. I don't usually start off a review by talking about the sweet pieces, but in this case, man, you gotta see this game to believe it.

The rules aren't half-bad, either. Basically, you're pirates, and you're trying to get all famous by plundering and fighting and kicking ass. If you happen to score some rare booze and pen a little pirate ditty, well, that's just gravy.

You do all this crazy stuff by sailing around a circle of islands and doing pirate stuff (talking like a pirate is optional, but recommended). You have a navigation wheel that you secretly set every turn to announce which island you'll be plundering that turn, and this is important because if you go the same place as someone else, you get to shoot them. Sadly, they get to shoot you, too, but you would be kind of sissy pirates if you only ever fought unarmed pleasure cruises (historically accurate, maybe, but still sissy).

Combat can be dicey, because if you lose, you have to go fix your ship. This can be expensive (apparently even pirate mechanics overcharge), and can take you out of the game for a while. Happily, it kind of happens to everyone sooner or later, unless they're either really lucky or total girly-pirates, so it will probably balance out. Unless you're really unlucky, in which case it will totally hose you, and your friends will laugh at you.

The fights are played out with some pretty basic die rolling, with bonuses available for people who have stocked their ship properly. Since you know you'll be fighting sooner or later, it's a good idea to visit the upgrade islands - but if you do, you may have to skip the island with the really kickin' night club (it appears to be my night for dropping the 'g'). There may be some really awesome treasure available at the unemployment office (otherwise known as Crew Island, where you can also pick up some out-of-work fry chefs to man your cannons), but you might be stocked up on crew and really need cannons. Choosing which island to visit is the main decision you'll make every round, and it's not always an easy choice. You might want to rumble and kick an opponent in his wooden teeth, or you may want to second-guess and try to dodge fights while you fix your sails. There are a lot of factors in choosing your destination.

Fighting, however, tends to be a big fat festival of luck. You roll dice equal to your cannons, and hope for 5 or 6, and that's about it. There are cards that can help, which you may or may not have, but the ship fight is really about half luck and half preparation. Surviving is often a matter of not having been in a lot of fights before.

There's more to this game, but not a whole lot - legendary pirates you can beat for huge fame, battle cards to let you win fights, parrots that can suck up cannon fire better than the hull of your ship (these are probably magic parrots. I wish they made one that could soak up credit card debt). But you don't need a whole lot more. It's not a particularly deep game, and there's a whole lot of luck, but it's fun. The fact that it's incredibly attractive helps make it more fun, too.

Now, Pirate's Cove might be really pretty, and fun, too, but it's got some serious drawbacks that keep it from hitting my table very often. For one thing, you're pirates, and yet you want to avoid fights whenever you can. You're like little rabbit pirates. And not cool anthropomorphic rabbit pirates, with hats that fit down over floppy ears and patches over cute bunny eyes, but scared wuss pirates who hide and run away all the time. You're almost always going to be more successful if you avoid confrontation. The best way to win a fight is not to be in one in the first place, which is fine for real life, but boring for pirates.

And then there's the complete random element. Battles are so capricious that you can float in with a crappy boat and still have a decent chance at punching a big hole in your foe. If he's had a few turns to beef up (which probably happened because he managed to avoid fighting), you might be in trouble, but there's still a chance you could punch him in the junk a couple times before he sends you back to the chop shop to see if you can get a deal on a used mizzenmast, and try to talk down the mechanic for labor.

But my biggest beef with Pirate's Cove is how losing a few fights (fights that you were probably trying to avoid) is likely to virtually take you out of the game. You can't battle with a weak ship. You can't take on Long John Silver. You're going to get your ass kicked all over the place, and you'll never get to score any money. And since this is a short game, being behind for even a couple turns is a real nutkick.

Of course, you might still manage to score some crazy huge treasure, watch everyone else get into fights, bury it and wind up winning. So you can totally suck the whole game, then come from way, way behind to win by a landslide. That's kind of irritating. I know I'm complaining about a lot of stuff (and sometimes complaining about both sides of the same issue), but there really are some serious problems with Pirate's Cove.

Don't let my complaints completely put you off, though. This is an easy game to learn, the theme is great, the pieces are brilliant, and it can be a lot of fun. It's not deep, and the luckiest person is probably going to win, but it's still a kick to break out when you don't feel like playing a game where you have to plan every turn ten minutes out.

And it is super pretty. I can't emphasize that enough.

Cons:
Massive luck swings
Not hard to get way behind
No reward for combat

You can get Pirate's Cove here:
https://www.daysofwonder.com/en/buy/
Posted by Matt Drake at 6:48 PM

Pirate's Cove is a favorite in my gaming group, even if not a particular favorite of mine. We often wind up with one of the really tough "NPC" pirates at the start of the game, and we spend the rest of the game trying to avoid them, and each other.

But, the game is only 12 turns long, and can go pretty quickly, so we don't worry that we'll be sitting there playing the same game for 5 hours on a Friday night (which would put us ending up at around 1 AM, which HAS happened on D&D nights.)