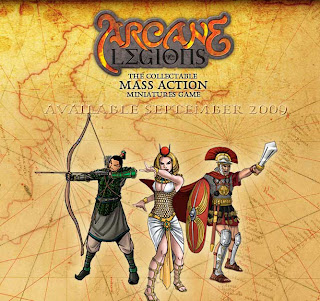 Today it rules to be me because I got to play Arcane Legions, and it also rules. This is the newest creation from some of the guys who made WizKids, and then had to find different jobs because WizKids crashed like a meth junkie and Topps shut them down (OK, I don't actually know for sure that everyone involved in Arcane Legions is ex-WizKids victims of the company's demise, but it sounds kind of amusing to say it).

In Arcane Legions, each player controls an army of regular troops mixed with some supernatural help. The Romans have minotaurs, the Han have terracotta soldiers, and the Egyptians have ambiguously gay spearmen who may or may not be dead already. This is a mass combat tabletop game - you don't care what one individual guy is doing, particularly, only what the unit is doing as a whole.

The miniatures come in two flavors. The special figures, like minotaurs and sorcerors and giant zombies, are all separate and painted. The rank-and-file guys, like your archers and soldiers and quasi-homosexual zombies, are all unpainted gray, and come on sprues you'll have to chop apart. Every figure has a peg in the bottom that you stick into this little tray that has a bunch of holes in it, and you'll put a card overlay between the figures and the tray to tell you what kind of unit it is. The overlays have holes that tell you where you can put your guys.

Moving and attacking and defending is not all that crazy tricky, though it is fun and really fast. The regrouping is the really cool part (and thus the part I actually want to discuss, instead of spending a long time talking about rules minutiae until all my readers abandon me for a bland-but-informative review posted by some uncreative cave nerd who writes reviews to score Geek Gold - as opposed to me, because I am an uncreative cave nerd who writes reviews to score free games and gloat about getting them before you do).

Regrouping is the coolest part of Arcane Legions. Reading over it, this part might seem like a pain in the ass, but it's really not, and it's really useful. Just about every card has more holes in it than it has figures. When you regroup, you take figures out of their holes and stick them in other holes, and this is how you go from hauling-ass-across-the-field formation to stabbing-people-in-the-privates formation. It takes just seconds to go from being really fast to being really good at hurting people.

The other rules work really well, too - movement is measured with the long side of a unit tray, and turns are accomplished with a hip little turning widget. Combat is a basic roll-off, comparing dice like Risk. Taking a hit means taking a guy out of your tray - and since every guy contributes somehow, you get weaker every time your unit is hurt. It's really cool, and completely negates any need for accounting. When you check to see how hard you hit, or how well you defend, or how far you can move, just look at the cards and see where you've got figures. It's that easy.

Each player takes turns giving eight orders. This goes really fast, and whole turns can be accomplished in just a minute or two. And if you're being attacked, you have to be there to roll dice and decide who dies, so it's not like you're standing around with your thumb up your ass for your turn. It's fast and easy and works really well.

So to sum up before I go on - you should buy a starter for Arcane Legions (you know, when you can, because I have one and you don't) because there are enough figures in the box for two players to play whichever army they want, using easy and intuitive rules, and finish in less than an hour (maybe 90 minutes, if you're slow). And it's really fun.

Now I'll tell you why you should get the boosters, too (and for this part I can't gloat, because I'll have to buy them, too). This is where the WizKids people take all that stuff they learned from people who would bring little scales to the stores to buy the blind boosters with the bigger figures (if you are one of those people, you should know that you are a douchebag). You can still just pick up one booster, if you want, but they'll also be selling bundles of eight boosters that guarantee you'll get at least one of each collectible figure and card in that set.

Yeah, you read that right. This is a collectible game that doesn't have to be blind purchase. Madness, right? No, more like AWESOME. Now you don't have to buy a case of boosters and wind up with 50 kamikaze zombies just because you were hoping to get that one black knight guy. It's like they flew a giant flag that says, 'Suck it, eBay scalpers.'

Wanna see it get cooler? Because it does. There are no commons in the boosters. See, that's cooler, right? When you pay for some rare figures, you get rare figures, period. No more trying to figure out if you can melt down all those worthless kobolds and resculpt them into a dragon. If you really want the commons (and you might need some), you can buy them separately in army packs. So cool I can barely stand it.

But the lovely people at Wells Expeditions knew I might overheat from all the awesome, so they brought me back down by including some stuff that sucks. That's pretty considerate, I think.

For starters, this is not a very pretty game. Miniatures gamers tend to play games like this for the eye candy, and frankly, that ain't here. The sculpts are not all that impressive, most of the figures are unpainted, and the figures that are painted look like the really early days of Mage Knight, when everything looked like it was painted by a color-blind rhesus monkey. And you get terrain, but you have to cut it out, because it's just a piece of paper that vaguely resembles a rock or a bunch of trees. You don't build it - it just lays flat on the table. Woo hoo.

Then you've got some assembly time. If you want your army to look like you didn't just hand your four-year-old a scalpel and a cutting mat, you're going to have to spend a fair amount of time trimming flash and gluing stuff together. There are painted shields, but they're not attached to the figures. If you leave a big stump underneath a figure's peg, it won't sit right in its hole. You can't just break this out, read the rules and play. There's a time investment here.

And my biggest complaint, and the main reason I won't have to spend very much money on this game, is that you could replace every figure with a peg. All the powers are on the cards, not the figures, so you could put Egyptian zombies where the Roman archers are supposed to go, and it won't matter at all. The only reason you need the miniatures is to see at a glance whether you've got four attack dice or five, or if you can move four times, or if you can use your special power.

You can't really call the figures window dressing, either, because if they were just there to be pretty, they would need to actually be pretty. Not that the figures are butt-ugly, but they remind me more of the plastic army men that you can get in plastic bags from the toy aisle at Safeway. Warhammer 40K is safe - nobody is going to quit spending hours painting super-detailed Genestealers just to paint these Chinese archers. I guess you could paint them, but I'm not certain it would be worth the trouble.

I don't want to get hung up on the sex appeal here. No, the figures are not all that hot, but the game is. The problems I have with the game are completely superficial, and once the website is live and I can create my own unit cards, I can make tournament-legal customs. There's going to be organized play support, so there will be tournaments, and I am pretty darn sure I will be entering. If you live in North Texas, and you decide to go to an Arcane Legions tournament, please don't cheat, and please play poorly. Not only are there special, limited-edition figures available at these tourneys (which I assume will be prizes), but I just like to win.

And as far as getting free games before you can get them? Well, what I have is a demo kit. It's not actually a starter, though it is equivalent to a starter. So my gloating will end when Arcane Legions is actually available, because then I will have to go buy it, just like everyone else.

Pros:
Rules are easy to learn and intuitive
Regrouping adds a killer tactical element
Plays fast, and has lots of strategic and tactical decisions
Collectible format that doesn't have to be collectible
I have it and you don't

Cons:
Just not all that pretty
Might take a while to put together (but not as long as, say, Warhammer)
Once the game is actually out, I'm going to have to pay for it

Obviously, if Arcane Legions isn't out yet, I can't link you to a place to buy it. But here's the site where you can stay updated on news and stuff:
http://www.arcanelegions.com/
Posted by Matt Drake at 4:54 PM

Thanks for the review. I appreciate your wit. :)

Here's my review, much less witty, but with photos!

Should be a great game from a guy who knows how to make great games (just maybe not keep them going). After having picked up a good bit of product at Gencon, it's nice to see that WE gave each faction some distinct pros and cons.

More info can be found at the MassActionMinis.com fansite.

How does it compare to Heroscape?

Arcane Legions is the game that most kids love to play.

I love your idea when you said that you liked most when you can play free games. Yeah, I do agree with you.