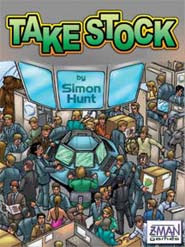 I've been getting a lot of review requests recently for games by Z-Man Games. Unfortunately, I've never actually received a review copy from Z-Man. Not for lack of trying, of course, but so far, no luck. I really want to try a few of the bigger games from Z-Man, though, like Pandemic and Wasabi and that crazy Arabian Nights game, so I have a plan. I'm going to write some amazing reviews that impress those guys so much, they decide they can't live without my opinion.

It's not a great plan, but I'm working on it.

The first game in my master plan is Take Stock. This is a smallish card game that has been out for a few years. It was designed by Simon Hunt, one of the most likable Brits you'll ever meet (that is largely irrelevant, but I'm in the process of sucking up). It's basically an economics game where you try to increase the prices on the stock you own while tanking the prices on the stuff you don't have. It's kind of tricky, and while the rules are written very well, the game itself is a bit complicated at first. Once you get the hang of it, it's damned cool. And I'm not just saying that to be a brown-noser (though I'm not ruling it out).

There are five kinds of stock, and a deck full of numbered cards that can be used to either increase the stock price or grab a few shares for yourself. This is the first place that the game gets really clever. Because the best cards can be used to either improve the price of the stock or be converted into shares, it can be tough to decide which cards to use when. If everyone owns corn, you would probably rather own more of it than pump the price and help everyone, but if you're the only guy with tech stock, it could really help to shoot that one through the roof.

Then you've got market cards. These are crazy stuff that can happen in the market, like stock crashes and splits and audits and freezes. You can use these to protect your own stocks, hurt your opponents' stocks, or just spawn chaos that kicks everyone else right square in the nuts (unless you're playing with women, in which case it might be better to aim for the face). You have to discard just to see the deck, and then you have to decide if you want to play right away or save something for later, so again, there are some really tough decisions to make.

So there's a fair amount of stuff going on here, but it never gets slow, because you only have a few things you can ever do. You could bump a stock, grab some shares, or play the market - and that's about it. You draw, you play, your turn is over. Which sounds like it could be a little shallow, but I'm here to tell you, that ain't the case. Holy crap, is this an involved game.

For instance, say you've got two shares of oil, which is at 4 with a split. Your friend has one share of oil and two entertainment, and your wife has three jewelry shares valued at 6 apiece. You're holding a 10 in gems, which you could use to bump the price or cut yourself in for a couple shares, and you've also got a stashed market card that will crash the entire market and make everything nearly worthless. You draw an oil card that could end the round with oil at an all-time high - but then your buddy gets to share in the spoils. So do you end the round with the oil card, get yourself a couple more shares, get some gem stock, or crash the market? You've got only one action, but lots of options - and this is really simplified. It can be a quandary just deciding what to discard.

(In case you're wondering, the correct answer to the above question is to play the jewelry stock to improve the value of gems. No, you don't win the game, but you also don't sleep on the couch.)

The game tends to come down to a close finish, unless one of you really sucks or is intensely unlucky. Play too hard, too early, and you might wind up with no stock options to close some deals - but play too conservative, and you might not be able to catch the leader. In either case, though, it will probably be fairly close, so this is one game where it's not over 'til the fat lady sings.

Take Stock isn't just a well-designed game full of cautious bluffs and bold finishing moves. It's also easy on the eyes. The art is surprisingly nice for being as functional as it is, and the cards are that sweet textured linen that feel so sexy in your hands (they may not be sexy to you. It's late, and I've been working pretty hard the last few days). This is a high-quality, high-production game that's meant to last.

So I really liked Take Stock. And I admit freely that I am trying to kiss a little backside for some free games (especially that Arabian Nights game - my kids would love that!). But I also don't care how much I want free games, I don't give a positive review if I don't mean it. I really like the Looney Labs people, and I want more of their games, and the first review I wrote for them, I said the game was like stinky cheese wrapped around spoiled fish left by the cat box. So when I tell you that Take Stock is an intelligent game with tons of difficult and meaningful decisions, it's true.

However, I'm not above ingratiating myself to the head guy at Z-Man. If all his games are as good as Take Stock, then he's got one hell of an eye for picking games, even if he does kind of look like a horror movie clown.

Pros:
An incredible amount of difficult decision-making, especially given the limited actions
Plays really fast
High production values
Simon Hunt is a great guy (this part is just me kissing ass again)
A close contest that rewards good play over just being lucky

Cons:
Rules are a little involved (though you'll most likely figure them out with the first game)
Cards could have used at least titles - had us passing the rulebook like a doobie at a Grateful Dead concert

You can get yourself a copy of Take Stock at the Z-Man Games website:
http://www.zmangames.com/
Posted by Matt Drake at 6:02 PM

I would totally send you review copies for that level of arse smacking. OTOH, I'm not Zed... :D