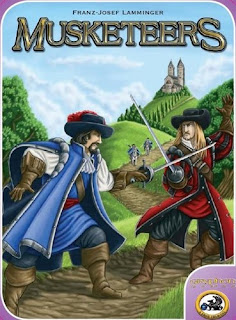 I have a bit of a rant that I intend to wrap into this game review. The rant is about pure abstracts with themes. I love a good abstract game, like Ringgz or Ingenious, and I enjoy a good themed game, like Colosseum or HeroScape. And of course, at some level, every game is an abstract, but the thing is, some games don't need a theme at all (for reference, see nearly every game Reiner Knizia ever made). If you're going to make a good, solid abstract, let it be a good, solid abstract, and let it survive on its own merit. Slapping down some pictures of sissy-boy Frenchmen in pleated collars and silly hats does not mean that your game has any relation to The Three Musketeers.

The thing is, Musketeers is a really fun game, a very clever little abstract that plays in about fifteen minutes and leaves you wanting more. The only problem is, there's no reason that I can see for it to have a theme at all. Throwing brown food coloring over a scoop of mashed potatoes does not make it a chocolate shake. There's nothing wrong with mashed potatoes, especially if they have plenty of butter and some chives and little pieces of bacon. But when you try to call them something more than they are, it's just not all that honest. Let the potatoes stand on their own.

In Musketeers, each player is a rapier-wielding agent of the crown trying to steal gems from the cardinal. That's the theme, anyway. You have battle cards, ranked from 0 to 10, and every turn you'll have to fight a contingent of the cardinal's guards, with values from 4 to 45. Everybody throws down a fight card, and you add your scores together. If your collective score is higher than the guard's score, you win, and the player who dropped the highest card gets a gem card. If you lose, the lowest card earns its player a jail card. There are only three gem cards, so you'll be stealing them by the end of the game, and there are only three prison cards, which you hope someone will steal from you.

The brilliance here is that, before you start doling out cards, you choose three cards from your hand to be your scoring cards. If you put all your highest cards as scoring cards, you won't be able to use them to win fights, but if you bogart all the best cards for fighting the guards, your score will suck. It's a balance, and you have to be careful with it to win.

Nine rounds of Musketeers (a full game) takes about fifteen minutes. You blow in, you play your cards, you add up your score. It's fast, fun and exciting. You want to guess what everyone else will do, based on the value of the guard, and try not to wind up with the lowest card when the guards win. You'll want to dump your chaff as you play, but you want to do it when you think your opponents will carry the fight - because if you dumped your zero on a losing fight, you're going to cover one of your scoring cards with a prison and cost yourself some serious points.

Musketeers is a good dollop of some seriously fine mashed potatoes, the kind you get in an expensive steak house, with gooey cheese and stuff mixed in. It's a great game, really. It plays brilliantly, and while it might seem a little odd when you're explaining it, you'll understand it after two hands. And since it plays fast, there's no reason you can't just play it again. Or, if the one guy who is always late manages to show up halfway through a game, you can just put it away when you're done and go on to whatever four-hour marathon you actually planned to play that night.

The only problem is, there's no reason for it to have a theme. It's like trying to put a theme on Backgammon, or Hearts, or Gin Rummy. It's completely stapled onto the game with virtually no reason to exist, and it has to end up costing the publisher some serious scratch to get someone to come up with all this beautiful art. You're not going to finish playing Musketeers and feel like you just got done buckling some swash. You're going to finish and think you just played a very clever card game with pictures of poofters with swords.

To be fair, it's not as though the muskeetering actually detracts from the game, and it might even help it a little, if only as a vehicle for pretty pictures. But if the game were completely honest, it would have minimal but tasteful graphics, large numbers with tie-breaker pips, and it would not try to gussy itself up. A good abstract card game survives on the game play alone, and the theme is little more than a marketing tool. And yet you see this over and over again, especially with European games - designers or publishers who put a tie and jacket on a work horse and pretend it's a ballroom dancer.

Musketeers is an excellent game, fast and short and smart. There's just no reason it had to be called Musketeers.

Cons:
Pointless theme (which is a weak con, so you should still get the game)

If you're looking for a great, quick card game to play while you wait for the other table to finish Agricola, you should go here and get a copy of Musketeers:
http://www.eaglegames.net/ProductDetails.asp?ProductCode=GRY013
Posted by Matt Drake at 6:15 PM

Once was funny. Twice was irritating. Now you're just a douchebag. Cut it out already.

No, dirty links are not kosher. I just don't catch them all. Freaking spambots outnumber me something like 329 to 1.

I've got Space Hulk. Give me a week or so, and I'll rave all about it.