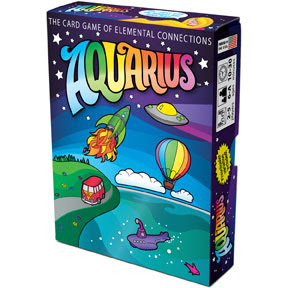 There's a reason behind the name of publisher Looney Labs. At first guess, you might think it's because the games are a little goofy, light-hearted and sometimes just silly. Look at Fluxx - this is a fun game, but it's pretty much random and pointless. And a game company that makes light, silly, fun games could easily be called Looney.

But the answer is even more unpredictable - the people who make the games are actually named Looney. In one of the most amazing confluences of space and time, the Looneys are not only designers of some slightly crazy games, but they are also complete hippies. I've never actually met Andrew Looney, but I always imagine him looking like a young Tommy Chong. I almost end up wondering if he changed his name at some point, or if his name was the reason he bought his first VW bus and made a card game that played best if you were stoned.

Aquarius isn't gong to help me figure out if the name came before the tie dye, but it certainly does shore up the argument that the Looneys are straight out of 1968. Starting with the title, this game has Woodstock and bell bottoms written all over it. You start with an element, and you're trying to connect pictures of your element in a long chain. You've got fire and water, air and earth, and for a fifth element you can explore while you're singing folk music at a commune, you get space. And just to make sure we know this is a hippie game (as if we couldn't have guessed), the player with the longest hair goes first. Yes, really.

The cards are kind of like dominoes, with each card showing from one to four elements. The game play is pretty simple - you put down cards, matching elements, and try to chain seven of your element in a row. Since your goal is hidden, you might bluff and put together a few other elements at the same time. This can be risky, but it could also be really clever, especially if you can play the 'everybody change goals' card and swipe the fire from your opponent just before it gets finished.

Game play is easy, but deep enough to be engaging. You'll understand it right off the bat, but it might take half a game or so before you know when to close off a chain, when to connect two or three at a time, and when to use an action card to take the pivotal card in your opponent's chain out and make him want to slap you (only he won't, because he makes love, not war).

My favorite thing about Aquarius, though, is the art. The new version has some really awesome graphics. I smile every time I open the box. The art is just plain light-hearted fun. It's eye-catching, simple, and really pretty (plus the 'move a card' action actually has a picture of a VW bus). When you've played a game of Aquarius, you might be tempted to just pour lacquer over the whole thing and seal the game into your table forever. I'm considering blowing up some of the art and making posters. Yes, really.

This is the third game I've reviewed from Looney Labs, and I love it. It's a very pleasant mix of relaxation and smart play, and should be enough to rope nearly anyone into a game. It's not a meaty game, but it's not supposed to be. You can kick back in your beaded suede jacket, throw your straight hair over the other buttcheek, put on some Mommas and Poppas, and enjoy a hooka while you play a groovy card game. Or, if you're like me, you can play in the fifteen minutes you get between checking your Blackberry and programming the DVR.

Cons:
May give you the munchies

You can, like, totally get Aquarius right here, man:
http://wunderland.com/LooneyLabs/Aquarius/Default.html
Posted by Matt Drake at 6:17 PM

Thanks for the quick review of the game. We just got it in this week and my curiosity was peaked sice it's a reprint. Sounds like a good filler.