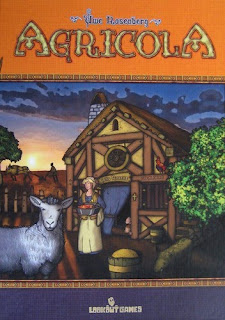 Agricola is the kind of game that barely needs another review. If you're enough of a hobby gamer to visit Board Game Geek, you already know that it's the biggest thing going right now. It's typical Eurogamer fare, especially the theme - you build a farm, so right there you know this one came from Europe, because Americans make games with body counts. You have to raise a family to help you till the fields and milk the cows, and maybe get a job. I was kind of excited at first, because I thought that when you can't make enough food to feed your family, you could kill them off, and that would give me some body count (thereby fulfilling the prerequisite for it to be a man's game), but sadly, you just have to go beg, and then people think you're dumb and you lose points, but everyone lives.

Agricola is a little like Puerto Rico, in that you take turns taking actions, except that when you take an action, nobody else can take it. So if you send Mom to go chop wood, nobody else can chop wood, and if you send Dad to fish, he gets hit in the face with a frying pan when he gets home from his fishing trip and Mom has blisters and splinters and Dad smells like whiskey.

You start out with a little two-room hut, and if you want more family members, you have to get more rooms. You need more family members if you want to grow your farm - each family member gives you one action in every round - but every family member is also another mouth to feed. And you don't want to have to kill off Bessie the cow just to feed Junior, do you? (Actually, there's a good chance Bessie lives in your kitchen, so you may very well be looking forward to making that smelly beast who craps in your easy chair into a steak dinner.)

So you'll turn over land, and build rooms on your house, and plant grain, and gather clay bricks and stone, build fences, and otherwise just keep doing stuff to make your farm bigger. One of the actions you can take is 'family growth', which is a polite way of saying that Dad put on some Barry White and Mom put on her sexiest wool undergarments, and nine months later, you've got one more setting at the dinner table.

And you're not just farmers, either. Junior might grow up to be a Guildmaster, and Mom might take a night job as a potter, thereby turning what was previously just a hobby she learned at the local junior college into a source of income. You might also build a wood-fired oven, or plant some fruit trees, or maybe even let Dad convert the garage into an office with a writing desk so he can work on that novel he's always said he would write, but never really got around to it. Chances are all he'll do in there is watch ESPN and drink beer, but a man needs his space.

The trick to understanding Agricola is to know how the scoring works. At the end of the game, you get points for having grain, for having a better house, for having a big family, for having lots of livestock, and even for stuff like having a big oven or a well. You can show your disdain for the dirt-working sodbuster and become a rancher, or you can plant like a madman and have a huge farm. You can become a minister, or a local woodworker, or lots of other stuff. The point is, the paths to victory are nearly endless, but you have to know which paths will pay out.

For this reason, your first play-through might be a little muddled. I admit that in my first game, I was lost for about two turns, and barely managed to make enough food to keep Mom from starving after the first harvest. But as the game progresses, you'll get the hang of it, and understand where to make trade-offs and which things you just have to have. You'll pass on the chance to score a pile of clay bricks just so you can ensure that you go first in the next round, because by God you're getting some lumber this time.

I've heard some criticism that Agricola is not a very interactive game. You can't run down to your opponent's farm and burn it down, or get his daughter knocked up (farm girl stories notwithstanding). It might have been cool to be able to spell profanities in your neighbor's yard with fertilizer so that the local pastor ran off in shock when he came for Sunday dinner, but it's really not necessary. Agricola has lots of chances to be as cutthroat as you want to be. No, you can't send a swarm of locusts, but you can grab all the clay and leave your opponents spending another turn gnawing on raw wheat because they can't get the materials to build an oven and bake some bread. Careful play can even let you shut out a player entirely, blocking him time and again from getting the resources he needs to catch up. Of course, you have to balance your back-stabbing with your need to get your own farm up to speed, but the point is, there's plenty of interaction here.

And the really crazy thing is that you can play Agricola solo, too. You can play it with your kids, or just with your wife. You can play with up to five people, or as few as two, and it's a great game every time. It's immensely flexible, able to accommodate pretty much whoever you can get to play with you, even when you can't find anyone.

On top of being flexible, Agricola is just a really fun game. It might seem at first like you're just taking turns grabbing stuff, but you'll have to plan your moves carefully, even to the point of knowing what you intend to do three rounds from now, with fallback options in case you get shut out. The theme might not grab you - it sure left me cold before I tried it - but once you try it, you'll like it. It's like The Sims: Medieval Farming. I started being particular about which family members did what, because Lil' Opie was a mad fisherman and Pop was a kick-ass brickmaker (on top of being a failed novelist). I got wrapped in the theme, and didn't even mind that I didn't get to kill anyone.

There's a damned good reason Agricola is ruling the charts at Board Game Geek - it's a damned good game. It was obviously playtested incredibly well, and the execution is about as flawless as I can imagine a game being. I enjoy playing Agricola an awful lot, and hope to have a chance to play it many more times.

Pros:
Tons of options, and lots of ways to win
The theme is actually really fun
Neat art and high-quality components (though I'm getting a little tired of wood cubes)
Scales incredibly well for any number of players
Wicked, wicked fun

Cons:
Who do I have to kill to make game companies quit using wooden cubes?

Dogstar Games has a great price on Agricola. And if you buy it from them, they'll keep sending me games, which means I can keep reviewing stuff you want to read about. Good deal, huh?
http://www.dogstargames.com/product/ZMG7026

One more thing - I'm off to GenCon tomorrow. Come see me in booth 2402, unless you're a stalker who hates me because I called you either an ignorant lackwit or retarded douchebag. I'm taking a laptop and updating from the show, so the reviews can keep on comin'. I might even score a review copy at the show and fill you in on the low-down on what's new and hot.
Posted by Matt Drake at 10:43 PM

I have to admit that the game has a bit of a steep learning curve, I lost my first game horribly because I was playing with others who'd all played the game at least once. I started catching on by mid-game, but it was too late to catch up.

A good set of training wheels for this game seems to be Stone Age, which has a similar dynamic. There are not quite as many options for your 'people' to do each turn, so it makes it a bit easier to learn.