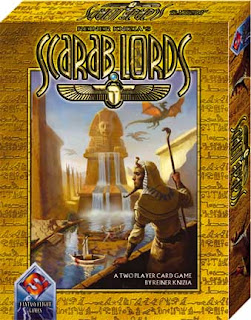 I have a sort of love/hate thing with Reiner Knizia. Specifically, I love to hate him. Maybe because he's like the board game equivalent of George Clooney. Maybe I just love to bait the Reiner drones who get whipped into a foam every time someone takes issue with some element of his games (like the weakest themes in history being totally pasted onto a game that is nothing more than an abstract. Yeah, drones, I wrote that one for you). Or maybe just because he sometimes has a tendency to completely mail it in on a game and sell a game that couldn't get published by anyone, anywhere, if it didn't have his name on it.

On the other hand, Reiner Knizia probably doesn't even know I exist, and if he did, I don't think he would be as complicated as love/hate. He could probably narrow it down to just hate.

But every now and then I play a Reiner game and go, 'yeah, I guess he does deserve all his success.' It doesn't happen a lot, but Scarab Lords is one of those games. It's got everything - tricky card play, easy rules, and great theme. Plus people totally die. I love games with a body count.

The theme is richer than a Vegas whorehouse. Each player (there are only two) represents an Egyptian noble house trying to wrest control of Upper and Lower Hekumet from the other. The two families try to dominate in three different areas - economics, religion and military - and they have to do it in both sides of the board.

Now, when I say, 'board', you might say, 'hey, jackass, you said this was a card game'. And you would be right - it is a card game, and I am almost certainly a jackass. The board is really just a little strip of game board that tells you where to play your cards. You could probably play without the board, but I don't know why you would bother. It comes with the game.

Players get a restricted number of actions on their turn (this is classic Reiner, and usually it bothers me, but it really works here). You can do as many phase zero actions as you want, but the bitch is, you probably don't have very many of those, because the cards have numbers that say when you play them, and not enough to matter have a zero. You only get one action in phase one, and one action in phase two, and then it's on to see who's winning. You compare your strength in each area - there are six areas, plus a place to put whichever gods you've bribed to help out for a while - and if you have the edge, you get a bonus. You might draw a card, or curse your opponent's cards, or make him throw away cards from his draw pile. Since you win when he runs out of cards (assuming the game lasts that long before one of you grabs the supreme spot), that last one can be pretty cool.

The trick is, if you want to win by actually grabbing control, you have to own four out of six areas at the beginning of your turn. So it doesn't really matter if you pull out some sweeping coup, it ain't over until your foe gets a chance to kick you in the privates (this is metaphorical. I cannot recommend a game where you allow anyone at all to kick you in the privates).

Scarab Lords plays really smooth, with quick, cutthroat turns and really simple math (it's Reiner, so there has to be math, but it's really simple math). The cards are really nice, printed on that cool linen stock that feels great in your hand, and they boast some magnificent art. And if you really want to mix it up, you can break out the advanced cards and change your deck between games.

A lot of people like to call short games 'filler', as if they're playing them because they're trying to lose weight and games are low in saturated fats (they are, but not many gamers end up losing weight by replacing food with games. In fact, many gamers combine the two, and just wind up fatter than all outdoors). But even though you'll probably finish a game of Scarab Lords in about 15-20 minutes, the idea is to play several times in a row. And that turns a short filler into a full meal.

Now, I won't tell you the game is perfect. For one thing, you can take a completely one-sided beatdown if your cards don't come up right. You're allowed to refresh your hand, but if you do, you lose your whole turn, so that option blows. I've lost or won several games due to the completely capricious nature of the cards. But then, that's why you want to play four or five times in a row - it'll even out a little.

But bad luck or not, Scarab Lords is a really cool game. I picked it up in one of FFG's crazy Christmas sales three or four years ago, and I like it enough that I still have it (I can't say that about many of my games). I think if I played it a lot more, I would probably be so good at it that I could work around the luck, but since I don't play anything enough to be wicked good at it, that's not real likely.

So I admit it - Reiner Knizia has some serious game design chops. Scarab Lords proves it.

But I still hold him personally accountable for Penguin. Man, did that game suck.

Cons:
A bad first draw can really ruin you

I wish I could tell you Dogstar Games has Scarab Lords, but let's face it - when I could get a game for five bucks, brand new in the shrink, it's probably not a big seller. In fact, it's completely out of print. I checked a lot of places, and only found it at Troll & Toad. They have one copy, and if any of you has any sense, they won't have it for long:
http://www.trollandtoad.com/pd1701202.html
Posted by Matt Drake at 10:53 PM

I've owned this for about two or three years through a similar sale and am still to play it...sad really. have you tried adding the Minotaur Lords expansion?

No, I haven't even seen Minotaur Lords. From everything I've heard, it's not a very good game.

Jumped on the chance to get this - there was 1 in stock, and I ordered it :)