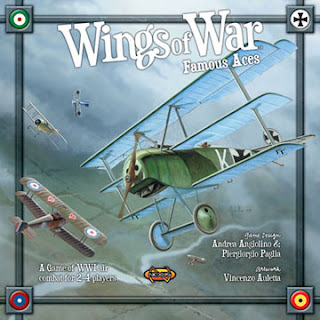 I tend to know stuff about games in general (though I admit to some embarrassing ignorance on the topic of Japanese console games). When I start writing about a game, I usually already have a pretty good idea what's out there, and how long it's been around, and whether it has had a bunch of expansions come out. But Wings of War took me completely by surprise, because this game has more expansions than I have books in my D&D collection (if you're just counting third edition, and maybe three-five, and not the old stuff, where I have like a bajillion books I've held onto since I was twelve).

So it seems to me that if there are this many expansions, there must be something to this game. It must be a pretty decent game - that, or Fantasy Flight just churns stuff out and shotguns it at the wall to see what sticks. Could be either one, really. It is with great delight that I report that it's the first one - and aside from some unfortunate scale decisions, Fantasy Flight tends to make pretty bad-ass games, so that second one is unlikely anyway.

Wings of War is definitely a simulation-style game. Each player commands a fighter plane from World War I, and then commences to shoot holes in the planes commanded by the other guys. I wouldn't say it's an entirely accurate representation of how biplane battles happened, but then, I remember a game my old man bought when I was a kid - it had the same theme, but tried really hard to be true-to-life, which meant that there were so many rules that it was a little more interesting than long division, but only if there was an awful lot of long division.

Each plane has a different maneuver deck, which is a bunch of cards that all have the same letter on them. You choose three in order, put them down, and then resolve them. It's the same kind of mechanic you see in something like Robo Rally or Great Space Race, only there are no grids, just your open table. The cards have blue paths and black arrows, and you put the card on the table and then put your plane so the black arrows match up. It's almost a hybrid between having a map with all the hexes marked off and having to use a tape measure. Of course, this means that while you probably know where you're going when you start moving, it could be a little dicey by the end of the turn, when you're accidentally flying your plane right into the other guy's poop chute.

Which brings us to shooting at each other, which is also pretty darn easy. You have a little ruler that tells you whether your opponent is in range, and if he is, how many damage cards he draws. There are no dice here - each card has different numbers on it, from 0 to 5, which indicates how badly you get perforated. When your damage cards add up to the strength of your plane, you go down in flames. Or maybe you're not on fire, but you crash anyway, and then the Germans pick you up and put you in a prison camp where you start digging tunnels and then Steve McQueen tries to jump barbed wire on a motorcycle... wait, wrong war. Never mind. You just die.

At this point, you've pretty much heard all the standard rules, but the optional rules are what make this game. The damage cards have little icons on them, and you might wind up with your rudder stuck, or your plane on fire, or your guns jammed (and before Johnny McRules corrects me, the guns jam in the basic rules, too). Plus if you can start the turn right on your opponent's butt, you can tail him, which means you'll probably get to shoot him a couple more times. Which is fun for everyone, with the possible exception of the guy who gets shot.

I think Wings of War is a blast, and so do my kids, but it's worth mentioning that my wife didn't like it. She's not a fan of games where you measure stuff (needless to say, no Warhammer 40K at my kitchen table), and Wings of War does have a bit of the measure-and-move factor. The cards do most of the measuring work for you, but you can still get that 'no, I'm pointed this way another half a degree, so I can just barely shoot you' that makes you wish you weren't playing with that rules lawyer/bad sport/jackass who is always trying to exploit loopholes.

Unlike my wife, however, I really liked the card-based moving. I want to see what else this game has to offer - and let me tell you, there's a lot. There are like four or five expansion boxes with two-seater planes, more powerful guns, different maneuvers and - well, frankly, I just have Famous Aces, so I'm not sure what else is in there. Plus there are a whole heck of a lot of miniature planes on cool plastic bases that let you adjust for altitude, and those look great (on the website, at least - I don't have those, either). I'm probably going to end up spending more money on this game.

I'm really glad a reader requested a review of Wings of War. Otherwise, I probably never would have played it, and I never would have found out how easy and fun it is. But then, now I also have another great way to spend all my extra money, and let's face it, if I had a bunch of money, I would just buy all the games I want and not have to write snarky reviews and lewd comments to try to get people to give them to me for free.

Pros:
A nice balance between an accurate simulation and a clever board game
Neat art
Different planes behave differently, which makes them more interesting
Easy to learn, but still has plenty of depth

Cons:
There's a little measure-and-move in there, which might turn off a lot of people
There are about 20 more thing I want to buy now
A fairly irritating amount of luck, especially if you happen to draw the one 'crap, I'm dead' card

Never mind what this said before. Now Dogstar Games has Wings of War, and you can get it cheap with free shipping. So there you go.
http://www.dogstargames.com/page/312402203
Posted by Matt Drake at 5:03 PM

Really cool game. The miniature planes are beautiful and they're even working on the WWII version of the game right now.

The Red Baron's planes are must buys just for the history.

My son and I like to play. We like 2 planes each. The minis make it look prettier, but it is just as fun without. I have the base game and 4 minis and will be good for a while.

The guy who recommended this review must be a smart fellow. Probably handsome too.

WoW is a great game and you can proxy many planes with a few minis. Check out Elstree's buying guide for it on heroscapers.

Thanks a lot for reviewing my little game. If you don't like luck, just put aside damage deck: A firing planes could give 3 points of damage at short range and 2 at long range, that's it.

Bye and thanks again!