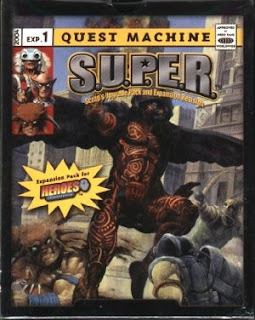 I don't usually review expansions separately from the base game. For one thing, I don't usually get expansions, because I don't really buy games. For another, there's not usually enough meat on a game to warrant reviewing the expansions, which is why I generally just kind of roll in any expansions I might know about when I write the review of the main game.

However, when the guys at Quest Machine agreed to let me review Heroes Incorporated, they asked that I review SUPER, the expansion, separately. And since I really wanted the game, I agreed. I'm kind of a whore like that.

Turns out, that was a good call. When I wrote about Heroes Incorporated, I complained of a few things. One was that the super villains didn't have art on their cards, which is weak sauce for a game about super heroes. It's like a steak dinner without a baked potato - you can have a bowl of chili without a potato, but steak and potatoes go together like... well, steak and potatoes. Super villains and art - same thing. I want to see what these bad guys look like.

Another thing I bitched about was that there was often no way to beat the villains. Here you are, champions of justice and corporate sponsorship, and if you have to fight a villain, he's going to kick your ass nearly every time. Spiderman never had to put up with that - he might have taken some beatings in his day, but he almost always whipped of Doc Ock. How lame would it have been if he could only ever beat up teenagers on stolen bicycles, and every time Green Goblin came by, Spidey just pooped his unitard and hid under a park bench?

SUPER fixes both of these problems. For starters, the expansion includes replacement cards for all the villains, this time with art. Just like that, problem fixed! Now I can see what Toxica looks like! Also, she's kind of nasty, so now I really want to beat her up, so that's just gravy.

And then there are justice tokens. Every time a handful of robotic ninjas hands you your head, you get a justice token. So if you win all the time, you'll never see these - but you won't win all the time, so you'll probably get a few of these puppies. You can have up to three, and you can cash them in at any time to flip the die to a higher score. So now, if you've pumped up your hero a little, you can beat super villains after they beat you up and hang you by your underpants at the end of a flagpole.

This is especially handy because super villains don't just disappear any more. Now they run off to their super villain lairs underneath such dire locations as the Lucky Discounts store. I'll bet you didn't know that while you were shopping the dollar store, a super villain might be creating the ultimate doomsday device - and the first people to die will be the people buying off-brand detergent and Chinese knock-off action figures! Unless you get there first - and then they're worth more points than any mundane band of mole-people tunneling into a bank vault.

As should almost be expected of any expansion for a super hero game, there are more super heroes. A few aliens show up, and while they can't have gadgets, they're pretty damned tough otherwise. They can steal powers, or fight crime at the speed of sound. One of the new heroes can send his army of robots to apprehend the kids stealing quarters from phone booths, and still have time to coldcock a band of bank robbers.

Cons:
I know it's self-published and wicked small press, but the die cut is freaking awful. I tore a third of the pieces I punched.

Spidey pooping in his unitard... that made me giggle.