Board Game Review - Settlers of Catan 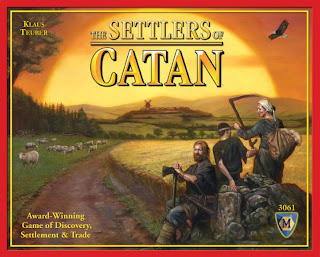 It seems nearly inconceivable to me that there's a real hardcore board gamer who hasn't played at least one game of Settlers of Catan. It's like saying you like frozen treats, so you might as well give this 'ice cream' thing a shot, since you've heard good things about it. Heck, you could probably even argue that Settlers was one of those games that gave the entire board gaming sub-hobby the kick in the ass it needed to really get cranked up.

I could go on about games we had before 1995 and games we had after, or the dramatic rise of the Eurogames, or a lot of other crap that would be half history lesson and half conjecture. But I'm not going to, because really, I'm just a game reviewer. I write about games - not the history of games, or the phenomenon of games, or other highbrow, pseudo-academic horse pucky. I had a reader ask me if I would review Settlers of Catan, so here we go.

In Settlers of Catan, each player is trying to build up an empire on a teeny little island. It's not easy, either, because the island is small and resources are scarce. Plus there's this bastich of a thief who keeps running around and swiping your crap. But you'll manage to build settlements and roads, raise an army, and try to rule the world. Well, you'll try to rule a tiny little island. OK, you'll try to carve out a little corner of it that's a bigger corner than anyone else has.

There's virtually no reason I can think of to recite the rules to you. For one thing, 90% of you probably already know the rules. For those of you who don't know the rules, you can go to BGG and download the rules. Or you can read a really boring review by someone who will tell you the rules in exhaustive detail. Or you can just stop nearly any gamer in any game store in any part of the country, and if they play board games, they can probably tell you the rules. So we'll skip right to the part where I tell you why I don't play Settlers very often, but still haven't sold my copy.

There's a fairly retarded amount of luck in Settlers of Catan, which is kind of funny, given its status as the kingpin of Euro games, and Euro games tend to be sort of short on luck. If you need to roll mountains, you'll probably get everything but mountains. If you spend your sheep and rocks to buy a development card and need a soldier, you'll probably pull a library. The luck can really bite you, but the real key to being good at Settlers of Catan is knowing how to play the hand you're dealt, so the luck tends to separate the boys from the men, unless you're actually playing with women, in which case it will separate the women from the other women.

On top of the luck, there's a lot of strategy and tactical maneuvering. You have to develop long-term plans that are flexible, and then you have to know how to position your roads and developments to maximize your potential for success. If you are trying to have the biggest army, you could be wasting your efforts if you get in a pissing match for the longest road. Dump all your resources into a city, and you might get the victory-point bump, but you might also break your bank and wind up with no way to trade some barley for a couple bricks when you need them.

Player interaction is not really all that high in Settlers, not compared to a lot of the games I love to play. Sure, you can block your opponents with well-placed roads, and steal their cards with the robber, but it's not like you're going to march on their capitals and ride off on their women. I'm OK with that relatively weak interaction, but it's not my favorite. On the other hand, it does limit the revenge player - you know, that one guy who had one territory way off in the boondocks, and you needed it so you took it, and then he spends the rest of the game attacking you, even though it means he loses. So now he can rob you a couple times, but it's not like he's going to take you out of the game.

I don't even play Settlers of Catan once a year. I keep it, though, because while it's not at the top of my list of games, it is a remarkably good game. It's a little on the dry side, but there's stuff to do even when it's not your turn, and you can finish in an hour or two. There's no body count, but you don't need violent deaths to make a good game (though it helps). It's very intelligent, not too tough to teach, and rewards the skilled player over the rookie, while giving the rookie enough of a chance to at least hold his own.

I don't guess I would recommend Settlers of Catan to everyone I know. If you can only have fun when your team of space marines is chasing aliens down starship corridors, or you really only like games that you can play while you're all sitting in the living room with a cold beverage, Settlers is going to bore your face clean off (and let me tell you, if you've ever lost your face to a boring game, it's no picnic. You'll need Jagermeister and Red Bull to get it back). But if you like to really think about what you're playing, and you can get behind a theme with no bloodshed, you ought to at least give it a try.

Just ask any gamer who preaches for the Church of Knizia - they probably have a copy of Settlers. And they might even play it with you, if you agree to play a Reiner game afterward.

Cons:
A little dry
You can't shoot anyone

Of course Dogstar Games has Settlers. So does nearly every other game retailer on the planet. But Dogstar has it just as cheap as everyone else, and they'll ship it for free, which saves you even more than anywhere else. So if you're going to buy a copy of Settlers of Catan, you should do it here:
http://www.dogstargames.com/product/MFG3061
Posted by Matt Drake at 6:56 PM

What? A runaway leader is an all-too-common problem in my experience. Once you're behind and you're at the mercy of the dice rolls, I don't think there's much you can do to stop the leader without getting everyone to work together to stomp on him. "Runaway leader" should be in the cons list.

Huh. I've always seen the robber sort of balance out the leader. When one guy gets way out ahead, everyone sends the crooked thief his way.

"Player interaction is not really all that high in Settlers..."

Well, really? I think the freeform trading is pretty high on my list of Player Interactivities. That being one of the cornerstones of the Settlers game and you ignoring it ... well, what can I say? ;-)

Olav - except that you can win the game without ever trading with anyone. How important or central can it really be if it can be completely ignored?

Yeah, you can trade. But you can't invade my capital. You can't send a super villain to my crime scene. You can't sabotage my outbound rocket. You can't curse my temple, or destroy my moon base, or crack open all my whiskey.

The interaction is high for a Euro. It's not all that impressive for any other kind of game. When you compare a lively trading phase with a firefight in West Berlin, Settlers falls on the low end of interaction. When compared with Puerto Rico, it might be high, but it can't hold a candle to Battlestar Galactica.

Sometimes the best reason to play this game is to hear all the "Wood for Sheep" jokes that run rampant. (If you call the resources Lumber and Wool, you don't get nearly the amount of enjoyment out of the game)

As far as interactivity - have you played the Cities and Knights variant? It is wildly more aggressive and interactive than the original. I can't even play the original anymore having played Cities.

I'm not all that fond of Cities and Knights only because it can take an extra long time, and people in my group start whining.

Seafarers is by far my favorite.