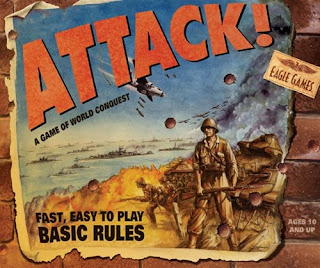 As a writer (an amateur, of course, and a total hack, but still a writer), I have a pretty serious grammatical complaint. This may not bother a lot of people, but it bothers me, because it poses difficulties if I have any intent to adhere to the rules of the written language. The complaint I have is about punctuation. Specifically, my complaint is with games whose titles end in an exclamation mark.

No matter how good a game might be, it makes it more difficult to review when I have to insert an exclamation halfway through a sentence. Plus, if you're writing in Word, the software will usually auto-correct and capitalize the first word following the erroneous punctuation, which makes more work for me, unless I choose to let it just roll on with the 'repaired' sentence the way it is. Consider, for example, this following sentence:

Playing Attack! Is a lot like playing Risk, but completely different.

See how that got turned into two sentences? What the heck kind of sentence is 'Playing Attack!'? And furthermore, what if I want to put a comma after the exclamation mark, or even worse, a different form of punctuation? And what if the name of the game ends a sentence, but I didn't feel like shouting? Example:

Attack!, one of the big ol' board games from now-semi-defunct publisher Eagle Games, is a world domination game where players attempt to take over the world. Only in Attack!, you're not going to end up playing for eight hours while you try to eliminate every other player, because the game ends as soon as one player is out. It goes faster than Risk, and has more depth, so if you like Risk, how could you not love Attack!?

See how awkward that was? That last question reads like something a comic-book villain might yell - "where are you, Batman?!?!?!" It's clumsy. And it only gets worse when you explain rules. For instance:

In Attack!, players each start with just four regions, and must expand through diplomatic and military means. Most of the board is wide open, but when you launch an offensive against a neutral area, you draw a card to see what kinds of troops you must defeat. It is often more strategic to attempt to gain the province through diplomatic means - but this could result in you losing the area to another player. But then, that player will only have one lone infantry to protect the new region, which means you could probably overrun it, so a strategy develops where you force opponents to grab up a region just so that you can hit it when it's weak. The strategy in Attack! is quite deep, and includes even more options that make it a very cerebral game.

OK, that paragraph was easier, because I only listed the game twice. Of course, that means there were two sentences that were completely hosed, but it also meant I got most of a paragraph without the offending punctuation. So I must continue, if I hope to illustrate the clumsy nature of the misplaced exclamation:

The feature that best sets Attack! apart from other global warfare games is the fact that you can only take three actions on your turn. In Risk, you can attack over and over, but in Attack!, you may only perform each action once (except for diplomatic attempts, which are incredibly likely to fail anyway). You can move troops, engage in a battle, then blitz with your tanks and planes - and then you've taken two actions, and just have one more. Buying troops isn't automatic, either - you have to use an action for that, and instead of just counting up regions, you count up the points on the cards you get for grabbing land. This means that you have to really plan your entire move before your turn even starts - an element that I like to see in any game, and which is used exceptionally well in Attack!.

Now that period just looks lost, but what can I do? Sound like I'm yelling? That doesn't make any sense. But my only other option is irrational, redundant punctuation. What's a crappy writer to do? I could try just leaving out the name of the game, like so:

In addition to the normal land-based actions, players may also battle for control of the seas. As an action, players may initiate naval battles using cards that represent their ships, and a regular ol' pair of dice. A little dice-off/match-up lets both players decide quickly who will control the ocean, and controlling the ocean is a potentially huge ability. If you can control the seas, you can stop other players from crossing. This can keep them from coming after you - but it can also keep them from picking on easy targets, thus keeping you in a position to dominate. Not much time will typically be devoted to naval battles, but when they happen, they're usually very important.

So that works, but sooner or later, I'm going to have to mention what I'm reviewing. So rather than just mention it once and then say, 'the game' throughout the rest of the review, I'll try putting the name at the end of the sentence:

There is an incredible amount of strategy and tactical maneuvering in Attack! Building the right army, targeting the right country, and forming the right alliances can be critical to winning Attack!

That works because it doesn't really matter whether or not I yell. I mean, it's kind of dumb to yell those sentences, but what the heck. It's just a game review. Faulkner I'm not. So I'll close with this last attempt to make this work:

In short, fans of large-scale tactical games - and even a few Eurogamers who like to blow stuff up - will enjoy playing Attack!

Cons:
Can plod a little bit - turns can take five to ten minutes, which is rough with five players
Quite a bit of luck
That damned exclamation mark

Even though the original Eagle Games is pretty much gone, you can still get Attack! Just go here, save some coin, and get it shipped free:
http://www.dogstargames.com/product/FFD101004N
Posted by Matt Drake at 5:05 PM

You didn't review the game; just complained about punctuation. Unless, that was the real revi-oh, you're good.

you could have added even more punctuation and wrote it as "Attack!"

OK got it you don't like Attack! And that is just part of your nature. You are right that looks awful. They should better try to change those things. By the way if the Italics where your review of the game I am going to buy this one.