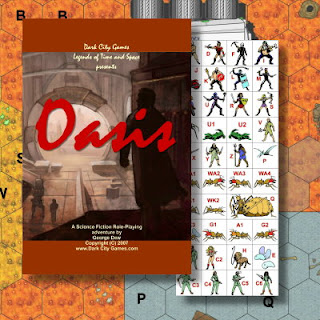 I don't often review roleplaying games, because I don't often play roleplaying games. But I thought this week I might try something new - a solid week of off-beat RPGs. That should properly alienate my entire readership, and motivate me to take up a hobby that requires less storage space, like collecting antique cars.

I'm not going to write three reviews of D&D and its myriad clones. I think if I'm going to spend a week boring your pants off about games you won't play, I'm going to tell you about three games you don't know about already, to offer some alternate gaming concepts besides playing numerically-defined half-drow or crybaby monsters full of internal angst. And so I'm going to start off with Oasis, a stand-alone adventure and RPG in the Legends of Time and Space series from Dark City Games.

The concept behind Dark City Games is roleplaying that resemble a Choose Your Own Adventure book. These books from the 80s told lots of different stories, where you had some control over the outcome. There would be numbered entries describing scenes, and each scene would end with some choices and their corresponding numbers. Like this:

"You stow away on the submarine, and once it's at sea, go looking for a meal. The first mate catches you pilfering dry goods. Do you offer him a handy if he'll let you have some bread (turn to 143), punch him in the junk and run like hell (turn to 22), or ask him to play a game of Canasta (turn to 54)?"

And then you would decide what to do, often winding up shoved out an airlock with the bread crammed up your ass. More often than not, these books would reward you for the stupidest choices - punch the guy or bribe him with hand sex, and you'll wind up in the brig, but beat him at Canasta and you could wind up captain. Happily, the Dark City adventures don't mimic the silly decisions you could find in a Choose Your Own Adventure.

The Dark City adventures all use a similar set of rules, based almost directly off the old Fantasy Trip rules. They are incredibly simple - three stats, three skills and a couple rules for whacking people. But somehow, these simple rules are more than enough to create a playable character. You don't have to dwell on your character's back-story and motivations, or spend thirty minutes calculating move speed and resting heart rate, or flip through fifteen pages of equipment to pick out the four-piece armor suit that would best complement your choice of weaponry. You just pick your numbers, pick some skills, grab some weapons and get ready to rumble.

Legends of Time and Space is the sci-fi system from Dark City Games. It's heavy on gunfire, which makes a lot of sense, because if you could shoot someone, why would you have a sword? Creating characters takes about ten minutes and a sheet of scratch paper, and then you grab a handful of six-sided dice and jump into the game.

In Oasis, your intrepid band of space cowboys is sent to a deserted planet to recover a lost space probe. Since Richard Gere is not in the mission (and presumably did not hear about this probe thing), you can be reasonably sure that the planet is not Uranus. And since it would be a pretty retarded adventure if all you did was drive, it's a safe bet the planet isn't all that abandoned, either.

Along the way, you'll meet all manner of mutant bug and twisted monster, and then the action will move to the little hex grid that comes in the book. You'll play out your combat encounters, possibly using the cardboard chits that come with the game, and every fight will wrap up in about ten minutes. Try doing that when you're calculating range bonuses, dice pools and opportunity attacks.

The story plays out pretty easily - you can finish the whole scenario in a single evening - and there's a ton of exploration and brawling along the way. The mission can go completely south, leaving you with dead explorers and a wrecked truck, or it can go really well, leaving you with a ton of cash to spend on alien hookers and outer-space whiskey.

I was really skeptical of these games at first. They're printed at home, with mediocre art and ugly counters. The maps leave a lot to be desired in terms of being fun to look at, and the rules are drier than desert sand. Hell, the whole miserable package comes in a plastic baggy, so if you don't like the game, you could throw it away and just use the bag to carry a sandwich.

But then I played one. The writing is actually really good in the adventures themselves. And since moving from place to place or getting in a fight involves a numbered entry, you can play them solo. Add in a couple players and a creative GM, and you've got a ready-made RPG good time. In fact, these things are a huge bonus for a GM, because you don't have to spend a week reading every room description in a 64-page module before you can even play the intro.

I played Oasis with my kids. We all had a blast, and can't wait to play another adventure in the Legends of Time and Space series (which means I need to buy some more, which I totally will). If I had one complaint, it would be that the post-apocalyptic feel came off a little cheesy - giant ants and blood-thirsty mutants are so done to death. But cheesy or not, the game was a riot, a lot more fun than trying to run a four-level dungeon crawl stocked with 47 hobgoblins and no toilet.

I highly recommend Oasis, and any other games from Dark City Games. If you're not sure, there are two sample adventures at their site that you can download for free, and the rules are also posted at the site. They've got Westerns, sci-fi romps and fantasy dungeon crawls, so there's a little something for everybody. Best of all, the low-rent production means that you can buy an awesome little game-in-a-bag for like $13.

If you play roleplaying games, you owe it to yourself to give one of these games a try. If you hate it, you can come back here and complain. And I'll either ignore you or tell you to bite me.

Pros:
Easy to jump right into the game
Quick and exciting combat
Fun and unpredictable - not even the GM will know how this will end
More fun than I can remember having with an RPG for years

Cons:
No production values to speak of
Rules seem a little bare-bones until you use them

If you play RPGs, or even if you like them but quit because the only other gamers for fifty miles are tubby cave-troll losers, go check out Dark City Games:
http://www.darkcitygames.com/index.php
Posted by Matt Drake at 4:07 PM

Looks like a lot of fun without a lot of time commitment unlike some RPGs. D&D miniatures would make good substitutes for the stand ups too! Thanks for the review and link, Matt!

Yep, when I play the fantasy ones, I'm totally picking out minis ahead of time. I may even build some terrain from Scape pieces.

I got friends busting my chops to play AD&D, so maybe I will check out this instead and see if they will go for it, it sure sounds fun.