Board Game Review - Mall of Horror 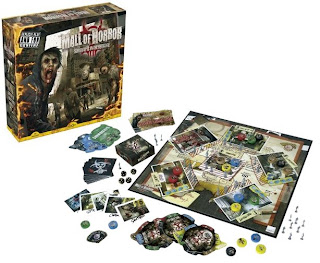 The problem is, not very many zombie games come very close to creating the feel of a zombie movie. In fact, the only zombie game that I know that does the job adequately is Last Night on Earth... and I'm not reviewing that one. I'm reviewing Mall of Horror, which is more like a Euro with a zombie theme.

Mall of Horror appears to start off like Dawn of the Dead, with the survivors holing up in a mall. Except that the mall is almost completely abstract, and your survivors keep inexplicably going to the parking lot. There's a toy store, a security office and a clothing store - but for some reason there's also a supermarket, and a completely separate bathroom. I guess the toilet at the Safeway is only for customers.

Everybody gets a team of survivors, three or four people just trying to stay alive until the National Guard sends choppers to evacuate everyone left after the zombies turn the mall into a giant food court. But instead of fighting off zombies and working together, you take turns shoving each other out of the stores to get eaten. It's like a cross between a Romero movie and a cheesy reality TV game show.

Every turn you basically do two things. First you decide where you're going to move. You have a little hidden wheel that points to each of the locations, and you have to send one person to the location you choose. And the people can't just hide - apparently the only way to stay alive is to play a desperate game of Red Rover and just bounce between the bathroom, the clothing store and the parking lot, hopefully with a baseball bat to fend off the rotting dead.

Once you show up at a place and see if you can kill enough zombies to keep them out of your location, you have to see if zombies eat people. If you're at a place where the breathers don't outnumber the undead, you take a vote, and the least popular survivor gets kicked out. Only instead of spending the next four weeks in a hotel waiting to see who wins the million dollars and who winds up with a skin rash on their genitals, the person who loses the vote gets to become dinner for the bloodthirsty zombie horde. You can almost see Jeff Probst stepping out and saying, 'I'm sorry, Blondie. The tribe has spoken. Zombies are going to eat your face.'

Mall of Horror is a mixed bag for me. It's only a zombie game because there are zombies on the box. The theme is weak, and it takes some imagination to get into it. The only reason you're invested in the blond bimbo with the big boobs and the piercing scream is because she's worth seven points. You could almost remake the whole thing like an episode of The Weakest Link. It's not as bad as a Reiner game - it's not a math game in a crappy disguise - but it just doesn't feel very much like a desperate bid for survival against an undead horde. It feels more like a voting and moving game with pictures of zombies and cards with guns on them.

On the other hand, in terms of pure gameplay, Mall of Horror is really fun. There's a lot of guessing and maneuvering that goes into the movement part, and there's a good bit of devious, underhanded conniving in the voting phase. There are more rules than I described here, so it actually has a pretty good amount of depth, and it can be really fun to see if you can kill that big-chested blond from the other team. It has a very European feel to it, so right there it's not much of a zombie movie game, but it's fun, and I think that's the most important thing.

Pros:
Cool art (lots of dead people)
Planning and guessing and maneuvering in the movement segment
Cutthroat back-stabbing in the voting segment
Fun

Cons:
Would make a dumb zombie movie
All the pips fell off my dice

Mall of Horror is fun, cutthroat Euro-style game that you probably don't want to play with grade-school kids. You can get it here:
http://www.asmodee-us.com/games/party-games/mall-of-horror.php
Posted by Matt Drake at 9:23 AM

I fully match with whatever thing you've presented.