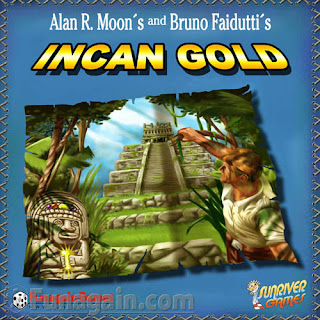 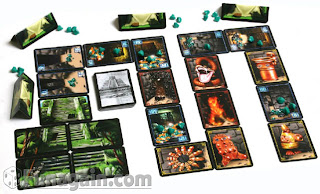 And now pretend you're scared a lot, and you could be playing Incan Gold.

The concept in Incan Gold is pretty much what I just described - everybody is exploring a pyramid, trying to retrieve artifacts and treasure and get out alive. There are five different tombs, and you run them down one at a time, picking up treasure and then chickening out before you get mauled by mummies or bitten by poisonous snakes or have to spend an afternoon with Willie.

The temples is 'built' one chamber at a time with a deck of cards. Cards show either treasure or danger, and while you can take some of the good stuff to fill your pockets, you can only keep it if you leave. You can keep going and get more treasure, or you can keep going and wind up with a poisonous spider living in your lower intestine, in which case the treasure doesn't do you much good.

Basically, the game is a balancing act between pushing one more chamber and having the sense to run back to safety. The longer you're in a tomb, the more goodies you can grab, but you also run a higher chance of getting stuck and losing all that hard-earned swag. It's fun and fast, but not terribly deep. It reminds me a little of dating in college - do you invite yourself in for a nightcap, hoping she doesn't smack you for your insolence, or do you settle for a kiss goodnight and then find out that the frat boy up the street got to see her naked after you drove away? Tough call, and for the record, I think there were lots of happy frat boys where I went to college.

The components in Incan Gold are kind of a wacky mixed bag. On one side, these are really nice cards with great color art. And on the other side, they're black-and-white and really dull. I don't pretend to entirely understand that decision, but the game only costs twenty bucks, so I won't complain much. And you get some really cool little plastic chunks of treasure, so that's probably where the production budget went.

A few interesting factoids, for you game trivia fans out there. Incan Gold used to be called Diamant, and if you take the artifact cards out of Incan Gold, then it IS Diamant. Also, you used to be able to add Incan Gold to your order at Funagain if you bought a bunch of stuff, but now it's sold through Fred Distribution (the least original company name ever) and so you just have to pay for it. Oh, and it's designed by Alan Moon and Bruno Faidutti, which makes me wonder which of this star-studded cast was responsible for the half-page of rules. Seems like a collaboration would result in more than two rules, but then, I don't make games, I just talk about them.

Incan Gold is a quick, fun game. It's especially good if you've managed to invite a non-gamer person (we call them 'squares' or 'norms') to dinner, and then after dinner they want to play a game. It's not one you schedule a whole evening around, because it will only take twenty minutes and then you either play again or everyone goes home and gets pissed that they bothered to make the drive. And while good times can be had, you will unfortunately not be able to sleep with a hot Nazi spy. At least not while you're playing the game.

Pros:
Quick and easy to learn
Fun
Nice art... on one side
Really cool little plastic treasure chunks in the shape of childrens' breakfast cereal

Cons:
Not very involved
Black and white... on the other side

If you need a fill-in game, or something to leave at the summer house, or just something to play with squares, Incan Gold should be perfect:
http://www.funagain.com/control/product/~product_id=016366
Posted by Matt Drake at 12:04 PM

It's also hella fun with a large group of people. We played this with eight or nine players, and it was crazy go nuts.

How many people can play it at once.

fun light filler game, sounds great to me, I like the theme.

Rather than use a game board, players simply pick a tile at random, and place it into the existing landscape in such a way that it matches correctly on all ......