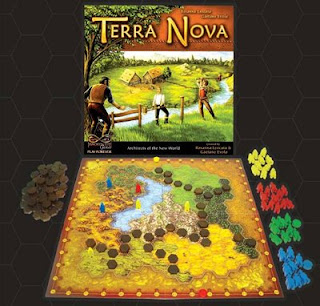 But I'll tell you this - we're just lucky we didn't have competition like in Terra Nova. This little pseudo-Euro has a bunch of people settling a little island, but unlike the proud US of A, these people can't just whip out a cavalry charge and send the ungrateful bastards running for the reservations. Hell, in Terra Nova, they apparently have some twisted Geneva Convention working, because these guys don't even get to kill each other at all. That's completely unAmerican. You should probably write your state representative immediately.

No, to claim land in Terra Nova, the different people have to build walls. I guess that makes sense - there are those who believe that the single most important invention for settling the American West was barbed wire, so there may be something to the creation of walls for the purpose of claiming land. The problem is, those walls don't build themselves.

So you'll start off the game by putting your wooden meeple cowboys all over the hex-grid map of the island. On your turn, you can do three things. Those things can be either moving or building a wall. So you could move twice and then build a wall, or move one guy, build a wall, and move another guy, or move and then build and the build again, or... well, that's about it. Building a wall is pretty much a function of picking a spot next to one of your wooden frontiersmen and putting a wall piece on it.

The idea is to close off areas so you can claim them. When a closed-off area contains three or fewer kinds of terrain (your inventive land speculators can build walls in the middle of lakes, across deserts, or through craggy mountains with equal ease), the little wooden guys inside claim it for themselves. The worst thing is, nobody gets shot. All these pansies just go build wood cabins and start procreating. Make love not war, indeed. Little wooden hippies is all they are.

In fact, these peaceniks are so willing to share that if two groups have the same number of wooden hippies inside a closed-off area, they split it! They turn it into some kind of commune. I'm not sure how they overcome the language barrier, but however they work it out, nobody gets killed. The settlers probably intermarry and have little miscegenated babies. It's disgraceful. They probably let the women grow leg hair, too, and burn bras.

The whole process is pretty fast. You can finish a whole game of Terra Nova in about twenty to thirty minutes, and then you and your peace-loving friends can go brew up some herbal tea and name your children after magical creatures.

Even without an American level of violence, Terra Nova is still a challenging game to play. Your brilliant moves can backfire if you don't think ahead. You can wind up surrounded in a fairly pathetic back field somewhere, wishing you could close off one more area so that your little wooden farmers didn't have to marry their cousins and have inbred redneck babies. Some planning and clever moves, combined with the ability to see what your opponents will do, can help ensure you don't finish dead last.

But if you like games where stuff happens, and you're not just abstracting a theme with wooden blocks, this might not be the big winner your game group has been hoping for. Terra Nova has one of those rulebooks that Euro fans call 'elegant', which means that even a six-year-old kid could understand the rules and be bored to tears. In the end, your enjoyment of Terra Nova will depend on what kind of games you like. If you like deep theme, fast action and tricky interplay, this isn't your bag. But if you like a simple ruleset, quick gameplay and calculating strategy, you might really get a kick out of it. You might also like incense burners and yoga.

Cons:
If it was any more Euro, it would be designed by a moody German
Theme is a little weak

If you like Euro games, you might dig Terra Nova. You can find it here:
(BIG FAT LINK)
Posted by Matt Drake at 11:29 AM