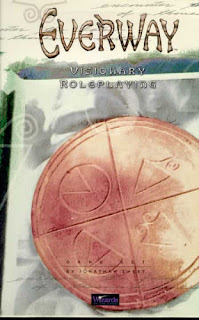 Everway doesn't do that. In fact, anything you ever thought was standard practice in a roleplaying game, Everway doesn't do that. You don't have a strength stat, or muscles or brawn or anything else. Instead, you have a fire score, and it applies just as well to stabbing people as it does to leaping over a ravine. You don't have hit points, or life, or wounds, or any other way to track how many times you've been cut, bruised or punched in the duodenum. Hell, most of the time, you don't even track wounds. You just go, 'your dude is hurt.' You don't even roll up characters - you just sort of make them up.

Sound interesting? It did to me, and that's why I bought it. If it doesn't sound interesting to you, you're probably a big fan of games where your most important skill applies to causing as much pain as possible in as short a time frame as you can manage. When you think 'action' in an RPG, you usually mean fighting, but in Everway, you mean anything exciting, from running from flesh-eating water fowl to scaling a mountain in hiking boots and a garter belt.

Everway is basically a fantasy game, if you started with D&D and then spent three hours smoking peyote and eating psychedelic mushrooms. It's trippy, but not Planescape trippy, where you still stab stuff, it just happens to be weird. It's more like stream-of-consciousness, Depak Chopra trippy, where your character deals with karma and tries to hook up the avatar of death with the ghoul queen so they can both turn into dragons and live happily ever after.

You create a character by spreading 20 points out between fire, earth, water and air. Then you pick a supernatural ability, like having fire sweat out of his lymph nodes or flying around like a lear jet. Maybe you give him the option to cast some spells, but you don't pick out a spell book with well-defined rules, you just say, 'he casts magic that manipulates and generates fire', and that's it. You don't have spell points or mana or specific rest periods. You just make up spells on the spot and then the GM goes, 'yeah, now you're tired.'

Everway doesn't use dice. What you have is several decks of cards, only the cards don't have numbers on them, just pictures. One deck, the Fortune Deck, is a hell of a lot like a tarot deck, and when you're not sure how things should turn out, you draw a card and sort of read the character's future. Like if he's trying to persuade the dryad queen to put on some freaking clothing before she picks up her kid from preschool, and you're not sure if it will work, so the GM draws a card and says, 'Hmm. The fish. The soul prevails. You talk her into putting on a skirt, but she's too free-spirited to cover her boobs.'

To really make sure you can have some truly bizarre adventures, all the heroes are able to do what's called Spherewalking. This just means they can use gates and whisk themselves between alternate realities. It's a little like how you might feel if you eat a tray of pot brownies and then watch Barbarella - by the end, you won't even bother to wonder how Jane Fonda survives in space when she's buck naked most of the time. It's a different place, with different rules, and Hell, it's Jane Fonda having crazy sex with just about every male in outer space while floating in zero gravity. Even if you're not stoned, that's fun to watch.

I'm not going to make excuses for Everway. If this is your kind of gaming, you'll dig it whether or not I tell you how cool the character creation is. If you're into roleplaying games that act like a cross between a cross-country bus ride and an acid trip, you'll want to check out Everway regardless of me telling you that the GM makes up adventures with a deck of 90 cards with fantasy art on them, and this lets him expand his imagination in ways that Hollywood only wishes it could pull off. You'll develop your character by having him face his fate, play to his virtues and suffer for his flaws. It's interesting, completely unlike anything else I've ever seen, and a lot like a Terry Gilliam movie (obscure pop reference alert!).

So there are a lot of drug references in this review, and frankly, I think that's about right. When I read through the rules (if you can call them that) for Everway, I thought, 'this reminds me of doing drugs'. Only instead of sitting around and being an idiot for six hours waiting to come down, Everway inspires you to really stretch the ol' imagination muscles and try on something you haven't done before. If you like RPGs where you could replace the DM with a laptop computer, then just go roll up another dwarven avenger and enjoy your mom's basement. On the other hand, if you dig new experiences and want to try something new, Everway might be worth a shot.

I found a couple copies of Everway on eBay, and Amazon has some frightfully overpriced copies. Other than that, I don't know that I could tell you where you could buy a copy. It's old. But you could try this:
http://imagecache2.allposters.com/images/pic/scrp/1107~Cannabis-Mushroom-Oasis-Posters.jpg
Posted by Matt Drake at 7:18 AM

WOW, sounds strange to a RPG'er of so many years, heck I am getting back into AD&D for the first time since I found Scape over 3 years ago, and this sounds just bizarre to me, but in a good way like I would like to try it. So Many games, so little time. Very funny review as always!