Board Game Review - Stratego (The New One) 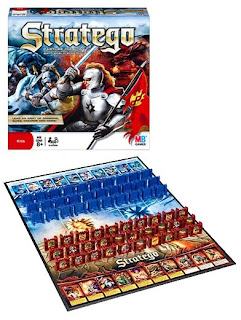 Some of my fondest childhood memories are of playing board games with my old man. Other fond memories include punching my little brothers or being terrified of girls, but the games were better, and included fewer wet willies or painful rejections. And one of my favorite games as a kid was Stratego. My dad didn't believe in giving me freebies, so I got my ass handed to me the first dozen times I played, but I got better, and eventually gave him a run for his money. By ninth grade, I was the school champion of Stratego (I went to boarding school in Africa. We had a lot of free time).

When I heard that there had been a re-release of Stratego, my feelings were a little mixed. On the one hand, I wanted to play this with my kids. On the other hand, they replaced the Napoleonic theme of the original with a fantasy thing - beast riders and wizards and knights and dragons - and they added a bunch of new abilities. So I was skeptical, but excited to try it.

The new Stratego doesn't have a new name, but it totally should, so as not to confuse it with the old one. You can play classic Stratego by only using the special powers on the scouts, dwarves and slayer (they used to be scouts, miners and assassins, in case you're familiar with the original), or you can kick it up a notch and play with the new rules.

The object of the game is to find your opponent's flag. If you can kill all his guys, that makes it easier to find the flag, but it's not the point. You can win by sneaking in and grabbing the flag while the rest of your army is becoming dog food. That's not likely, but it could happen. More often, one player will discover the other guy's dragon, kill it with his slayer, and then have carte blanche to chew the rest of the other team to kibbles.

Combat is a simple affair - you spin your piece around to show your opponent what's attacking, and then he spins his around to show what just got hit. If his number is higher, you lose. If yours is higher, you win. If it's a tie, you're both out. And if it's a trap, you're dead regardless, unless you're attacking with a dwarf, who can disarm the trap. It's all very simple, but the game's name is truth in advertising - serious strategy goes into this game. There's a lot of strategy in the setup, and you have to play well, too. You have to know when to reveal strength, when to hide your power, when to act tough and when to run like your ass was on fire and your balls were catching.

If you play the expanded version of the new Stratego, you get to add in a bunch of special powers. Elves can shoot at targets when they're not adjacent. Beast riders and knights can move twice. Sorceresses can make your opponent's guys change sides (I think they seduce them, which is inappropriate in a kid's game, but I'm OK with it). But the biggest difference is the dragon, who can now fly over the entire field as long as he can land on an empty spot, and then attack, and since he's the toughest dude in the game, that's a heck of a power. I can't emphasize enough what a huge difference these new abilities make - Stratego turns into an entirely different game. No more one-space-at-a-time strategic maneuvers or stealthy bluffs. The entire board can shift every turn, and one quick maneuver can end up tilting the balance. Oh, and it's really hard to get your slayer next to the dragon now. To accurately describe the dramatic turns of event, I would need to employ that 'In A World...' voiceover guy who used to make movie trailers, but he just died, so you'll have to take my word for it.

I'm having a hard time presenting an objective opinion on the new Stratego. I loved it as a kid, I love it as an adult, and the new stuff just makes it more fun. My son asks to play it with me regularly, and even my daughter will play now and then. This is just a good, old-fashioned great freaking game - but as I mentioned, I have a history with Stratego. Not as interesting as the history I have with loose women and cheap vodka, but that history is shorter and includes more humiliation and painful hangovers. My Stratego memories are all good, and I look forward to making a lot more now that I have kids that I can beat as badly as my old man beat me.

Cons:
You have to put stickers on every single piece. It's a pain in the ass.

To start building your own family gaming memories, go here and pick up a copy:
http://www.hasbro.com/default.cfm?page=ps_results&product_id=22400
Posted by Matt Drake at 11:32 AM

I was looking at this in the store just the other day. Like you, Stratego is one my earliest board games, and I've still got my copy (the first game I purchased with my own money- as a 3rd grader- sitting on my shelf, these many years later).

Anyways, I don't really like the fantasy retheme, but what really rubs me the wrong way is inverting the power scale of the pieces so that "1" is now the weakest instead of the strongest. That's just unstrategoy to me. I think I remember seeing it this way on some of the more recent printings of regular old Napoleonic Stratego as well. It just isn't right. 1 is the best. Only a bomb or a spie should be able to kill a 1. Dragons I could possibly live with, but don't mess with my #1.

Sounds like a good game. I may have to try it out!

I was happy to pick up the old style stratego the other day on clearance from my local TRU, but I think I'll try this one as well, and ditto to most of what wulfgar said (though I could dig a fantasy theme.) Based on your review I think I'll have to give this one a try too, it sounds pretty cool...

One aside, didn't in the original stratego you have the back 4 (not 3) rows on your side to place troops?

No, the starting layout is exactly the same. Aside from the art, the board is identical to the original. In fact, except for the art and the reversed numbering, the 'basic' version of the new Stratego is exactly the same as the old one.

Loved it as a kid, I am sure I would like the new theme, I had no clue this was out, thanks for sharing, another great review. Oh Vodka and Loose Women, how I moss College.

Turns out my memories, while quite fond, were not as clear as they should have been. Original Stratego did, in fact, have four back rows. My mistake.

So are the rows wider in the new game, or are there less pieces?

Reading this reminds me of a game I had as a kid called The Generals. It lacked a few things (traps/miners for one) compared to Stratego, but one thing it did add was that the only revealed piece in a challenge was the loser's. You put your pieces, blind, into an "electronic arbiter" that determined who won.

So, for example, if you take a 2nd Lt. with a Colonel, your opponent doesn't know if it's a Colonel, a 2nd Lt, or a 5-Star General. If you captured your opponent's flag, it played "Taps."

You might find it interesting if you can track down a copy.

I found the blog via your Elfball review and check it regularly now.