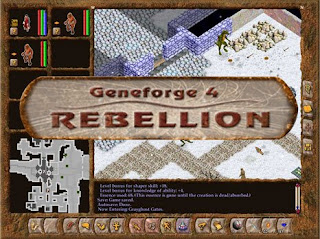 Not very many computer games make me take time away from my busy Xbox 360 schedule. Most of the time, a computer game just moves too slow, requires too little intellectual input, and mostly just sort of bores me compared to the joy of blowing things all to hell in a rapid frenzy that could entertain the shortest of attention spans for days at a time. But when I play games from Spiderweb Software, I end up losing five hours of my night and not even knowing for sure where they went.

Spiderweb Software makes lots of really affordable computer games that you can download and play. They have huge demos, so you can play for days before you need to pay. And at the prices of these games, there's no reason not to pony up the green and just get the whole game. The first game I reviewed from Spiderweb Software was Avernum V, and I loved it. I dedicated a huge piece of my life to that game, and I don't even want it back.

The most recent Spiderweb game I played was Geneforge 4. If you've played Avernum, you'll recognize most of the elements here - attack buttons, magic, and inventory are all nearly identical. The graphics are the same basic sprites and blocky terrain. The actual mechanics of the game are very similar to Avernum, but that's where the similarity stops.

First off, the world is completely different. Geneforge takes place in a world dominated by a group of magic technicians called Shapers, who are capable of creating wacky life forms and commanding them. These guys build their own armies from scratch, and they're more or less assholes. They're tyrannical and just plain mean. Sometimes they even take tags off mattresses, and you know what kind of douchebag does that.

Enter the rebellion. These dissidents can use a special piece of biomachinery called the Geneforge (thus the name) to make normal people into Shapers. You start off as a normal person, but quickly gain the ability to build your own monsters. It's kind of like Pokemon, but with acid puke and dismemberment.

As the game progresses, you'll lead your party of monsters around the world and fight all kinds of bad guys, from crazy cults of lizard-worshippers and rogue creations to full-blown villainous bad guys capable of making dozens of critters from thin air. You'll get tougher and be able to create even better creatures - basically, you start with that little yellow electric mouse and wind up with that weird pink psychic cat that can blow up the world.

One great thing about this game is that there are lots of possible endings. Early in the game, you can be recruited by the Shapers to switch sides, and then you spend the game undermining the rebellion. Or you can tell the Shapers to stick it in sideways and break it off, in which case you'll be dodging magical bullets the whole game. Right up to the very last decision of the game, you can change sides, and given the moral ambiguity each side presents, it can be a tough call.

The combat is the high point to Geneforge. It's all turn-based, but unlike Avernum, it's not quite as grid-based. The movement is a little more fluid, and the options are a lot broader. You can beef up your hero to be a weapon-swinging bad-ass, or you can hide behind your magic squids and fire-breathing dinosaurs. You may decide to be a master of magical mayhem, or you might get really good at shooting things from a distance. Your play style can vary according to what you like the most. In fact, it's possible to finish the game without ever actually attacking anything, though you will almost certainly have to tell your pet wookie to break some heads.

There are a few factors that make me prefer Avernum V to Geneforge 4, though. First, the fact that you're only one hero means that you can't win a fight with just one man standing and then run back to a town to heal up. It also means your inventory is going to get real crowded, real fast, because you have 1/4 the room you have in Avernum. And instead of specializing in four directions (one for each character), you end up trying to become a jack of all trades.

The second thing is the fighting itself. There's really only one downside here - you can't block very well. You have to really surround someone to shut them down, because you don't lose any speed when you slip past an enemy. In Avernum, you could lead off with your meat shields to protect your healer, and as long as you kept yourself spaced properly, the bad guys would have a hard time closing in. Now, though, it's nearly impossible to set a pick and fire from cover, even if you've got monsters the size of ankylosaurs that fart lightning.

However, if you ask me which game you should play, the answer is easy - both. They're really affordable, hopelessly addictive, and downright brilliant. If you're normally just a board game nut, you'll still be able to appreciate the subtleties of the turn-based combat. There is a ton of depth, lots of stuff to discover, and endless hours to spend fighting for whichever side you like.

I'm kind of bummed I'm finished with Geneforge 4. It's so much fun I may go back and play it again from the other side, just to see all the places I couldn't enter because those damned bad guys kept shooting at me. I still like Avernum V better, but only a little, and I'm itching to play another Spiderweb Software game.

Cons:
Some minor combat issues make it slightly inferior to Avernum V (but still better than any turn-based game ever made by someone else)
Still the same choppy sprite-based graphics

I love all the Spiderweb Software games, and if you like turn-based games at all (board, card, computer, console - I don't care), you'll get a good kick out of Geneforge 4. Go here and try the demo:
http://www.spiderwebsoftware.com/geneforge4/index.html
Posted by Matt Drake at 5:38 PM

Not really into COmputer games, but you sure make this one sound great, I will have to ask one of my computer game freak friends about this one