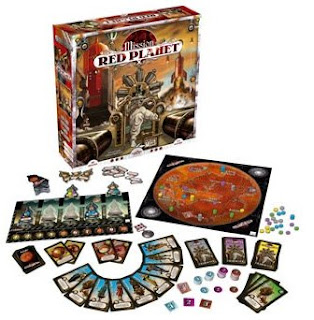 Going to Mars should be easy. I'm not the only one who thinks so - Bruno Cathala and Bruno Faidutti both agree. They made Mission: Red Planet because they're as outraged as I am over the fundamental lack of investment opportunities on Mars. Do you have any idea how much real estate is available on Mars? And right now, every piece of real estate is sold with extremely valuable mineral rights.

I plan to write my congressman and ask why I can't go to Mars. After all, if the astronauts in Mission: Red Planet can get to Mars this easy, why can't I? The game obviously recreates a potentially lucrative industry - exploration and exploitation of the red planet. It shows how easy this would be, especially if we could just get enough important people involved.

To show how this works, Mission: Red Planet combines a couple key elements. First, you've got spaceships. Obviously, you can't get to Mars in your Suburban, even with OnStar and XM Radio. You'll need a spaceship.

Also, you'll need interesting people. Mission: Red Planet gives each player a deck of nine different characters, who represent real people such as the explorer, the pilot, the soldier and the secret agent. Each turn, you pick one of these people to work for you, and you assign astronauts to the spaceships accordingly. So if you pick the travel agent (we definitely need more travel agents to book trips to Mars!), you'll put three astronauts in one ship. Of course, they probably all have to share a crappy room, and the agent probably forgets to mention that the entertainment is Ashley Simpson, but they'll get a great rate on a hotel and rental car when they get there.

Other characters do other interesting things - the scientist doesn't let you board as many astronauts, but he'll do a little research on the planet and find out where the soil is bad. The femme fatale will let you turn one of your opponents' astronauts to work for you (on further consideration, we may not want to hire these women when we actually put the Mars Space plan into action). And the saboteur will let you blow up a ship, as long as it hasn't reached Mars (we may also want to screen to make sure we don't get this guy on staff).

Once a spaceship is full, it launches for Mars. It's that easy. No puttering around the runway for three hours while traffic control clears some air space, no sitting in the ship with no air running while you wait for the stewardesses to show up. You fill up the ship, and you leave. It's that easy. And it should be that easy.

What's even easier is the flight times. Right now it can take all day just to fly from Dallas, Texas to Manchester, New Hampshire, but these ships take off for Mars and land the same day! It's obvious to me that someone is hosing us somewhere. Mars is waiting, people! Call your state representative and complain about the lack of proper space transport!

Each ship lands on a different territory of Mars, and then the astronauts leave and start digging for minerals. There's celerium in the ground up there, and God knows we could use more celerium! What, the energy crisis is going to just solve itself? I don't think so.

If you can get more astronauts in a single territory, you'll be able to grab up the great resources that grow there. Celerium is there, sure, but there's also sylvanite. C'mon, you couldn't use more sylvanite? I know I could! And there's something else in those great red deserts - ice. Back on Earth, we could be drinking warm margaritas pretty soon, so we need to harvest all the ice we can get.

The game also simulates how life should work with the winning conditions. At the end of the game, the person with the most stuff wins. If you've got the highest valued resources, you make the most money, and everyone knows that's what counts. You can also do side missions for Galactic Geographic, and score a few extra bucks for exploring particular areas.

Mission: Red Planet is fun. It's not amazing, but it's fun. It's clever and tricky and fast, with very little luck and neat pieces. The art is reminiscent of steampunk crossed with Looney Tunes, and it's a lot of fun, too. But most importantly, the game teaches a valuable lesson: We need to get to Mars. And fast.

Cons:
Not quite deep enough to grab you for a long time

For a light, fast game that teaches us about the benefits of Mars travel, I think Mission: Red Planet is a great pick. Go here and get a copy:
http://www.asmodee-us.com/games/strategy/mission-red-planet.php
Posted by Matt Drake at 12:23 PM