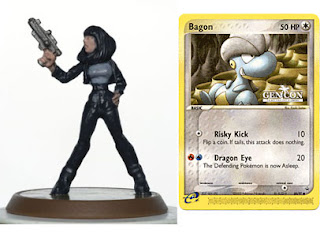 First, you've got reviews. Some are awesome (like mine), and some are boring (like 80% of the unreadable, boring crap that gets 14 stars and a thumbs-up at BGG). Some are useful, and some are obvious shills. Not a whole lot of reviews compare games to hookers, but that's why mine are awesome.

Then you've got press releases. These are not actual news, but they get noticed like they were. 'Ooh' people say, 'this new game company just announced this new game that I just HAVE to own! I will go right out and preorder it now without giving it a second thought!' But somehow these same people won't buy soap. Go figure.

Sometimes you have general interest articles. These are mostly in places where the editors are concerned with appealing to the masses and roping in those people who have only ever played Backgammon and three games of Crazy Eights. These are almost uniformly dull. I've written a few of these, so I know. I was writing them for Knucklebones Magazine, and while the publishers and my editor both thought they were worth printing, most people would probably have thought they were worth wiping your ass if you ran out of toilet paper.

And then you've got the world's most boring kind of game reporting - convention reports. Why anyone believes we want to read about how some loser geek got his picture taken with Reiner Knizia and got to hug a booth babe dressed like Xena is beyond me. I can never bear to read these dull recitations of whatever gaming crap the writer found while he was at a convention I missed. I've written one of these, too, and it was about as interesting as a Saharan weather report ('looks like it will be hot again. Dave, over to you.').

But I'm planning on changing all that. I'm going to tell you all about GenCon this year, and by God it will be interesting if I have to hand out tinfoil hats and Old Spice. I've got a booth (stop by VixenTor Games at booth #2334 for a free punch in the eye!) and so I'm going to the show. Only I'm bringing lots of help so I can wander around a lot, so I'll be able to get the lowdown on all kinds of new stuff.

Which brings me to the point (yeah, I know, took me long enough). It's time for another contest, and this time I'm giving away GenCon promos. I don't know what they'll be - I haven't gone yet - but I know I'll get a bunch. Whether they're dice with company logos, con-exclusive miniatures, special cards or just those ugly bobble-head dogs, I'm going to collect a bunch of them. And when I get back, I'll give them away.

So here's how you can win your own little piece of GenCon. Just email me at matt@vixentorgames.com and tell me your name, address, and favorite kind of game. That's easy, right? You can handle that, right? Then when I get back, I'll pick the top five names at random and send them random GenCon promos. I'll try to match the promo to your favorite game - if you like card games, you'll get cards, and if you like sex toys, you'll get very big dice.

The next three reviews will be on a slightly modified schedule, due to the fact that I will be out town. Wednesday's review will be posted Wednesday night, and I will be reviewing the road trip. Friday's review will be posted Friday night (really late), and I will review GenCon highlights, along with my analysis of the percentage of costumed freaks who wander past my booth. Then the next review will be written Tuesday the 19th, and then I will announce the winners of this contest and maybe talk some more about GenCon. Hopefully more mocking will take place.

I should warn my readers that the next two articles I write here may sound suspiciously as if I was drinking. This is due largely to the very high probability that I will be drunk. Something about going out of town for a week, staying at a hotel within stumbling distance of every bar in downtown Indianapolis, and seeing dozens of friends who are also drinking heavily tends to put me in a frivolous mood. So if you don't want to read my drunk ramblings, well then you can bite me, because I'm drinking, and then I'm writing, and there's not jack squat you can do about it.

So anyway, yeah, the contest. Email me your name, your address and your favorite kind of game, and see if I send you something. And come back Wednesday night to see me rant about rude truckers and ugly hitchhikers.

Here's my email again, in case you missed it:
matt@vixentorgames.com
Posted by Matt Drake at 7:39 PM