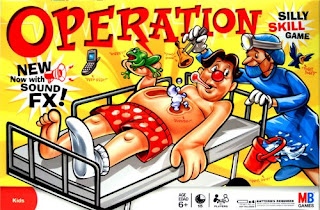 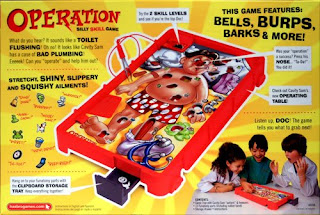 OK, you see the title and think, 'this has to be a joke. Everyone knows how to play Operation.' But it's not a joke - I got a review copy of the latest version of Operation, and so I'm reviewing it. Plus it's awesome.

The neat thing about reviewing an updated version of a game everyone has played before is that you already have a pretty good idea whether you want to play Operation. It's not like you're going, 'hey, I've never heard of this game before, because I grew up in a cave in West Virginia where we mostly just played with the lice we picked out of each other's hair.' Unless you were a seriously deprived kid, you probably have tried Operation.

In case you were raised by wild marmots and spent your youth foraging for nuts and berries, I'll explain a little about the genius of Operation. There's a picture of a guy laid out on his back like he was on an operating table, only he gets to keep his skivvies and his nose is a light-up red bulb. He's got all these holes in him that are lined with metal, and you drop little plastic pieces into the holes and try to get them out with the tweezers that are wired to the board. If you touch the sides of the holes, the guy's nose lights up and you have to pass the board to the next player, who will now get to probe around inside the cartoon dude with a wired set of crude surgical tools. Really, it's a wonder any of us grew up even remotely balanced.

The little pieces inside all have funny names. Like in the original, you removed the pathetic bastard's funny bone, Adam's apples or broken heart. Those are fun, because there's no way kids will be traumatized by pulling a guy's Adam's apple out of his throat with a pair of tweezers. Heck, it's so fun, you should try it on your friends!

The new one is a little more innocent. Instead of ripping out a guy's bread basket to see if he bleeds to death, you're removing a frog in his throat or cell-phone finger. It's not like tearing his wishbone out of his chest like you were about to make the world's goriest wish.

But the real appeal is not the new funny art or the fact that you're removing water from the guy's knee. The real appeal is the noise. The game has a tinny little speaker that tells you which piece to remove, like the sneeze that has you pulling the snot out of the patient's runny nose, or the flushing toilet that lets you know to yank the bad plumbing. The gurgle and the burp that go with burp bubbles is funny, but the fart that goes with toxic gas is the greatest. Once you pull a piece, you pop the dude in the nose to let you know you pulled it off, and the board starts making new noises.

If I had a totally demented wish, though, it would be that the new Operation had more interesting ailments to repair. Blood in the stool could be a little chair located in the dude's ass. AIDS could be a little Liberace that you yank out of his mouth. And my sophomoric sense of humor is duly served by the thought of extracting an enlarged prostate - a little plastic wang that you pull out of his drawers. Just the image of an innocent little eight-year-old girl using tweezers to remove a plastic johnson from a hole in a cartoon man's crotch makes me giggle like a teenager at a poop joke.

The new Operation isn't particularly hard unless you've got either a short attention span or multiple sclerosis. Even on the hard setting, you can pretty much just pluck the little pieces out for as long as you want. I remember this being a lot trickier as a kid, but then, I also had trouble sitting through all of a Bugs Bunny cartoon, so I may just have been impatient. Now I can run the board like a pool shark at the local Boy's Club, and my son ran nine in a row before we just said, 'OK, put them back and let someone else play.'

So maybe Operation isn't the game that will replace Black Ops in your weekly game club, but if you have kids, it's an easy call. The game is cheap, and it's fun, and your kids will shut up for a while so you can finish mowing the lawn in peace.

Pros:
Funny new ailments to pull out of a man's body cavities
Goofy and entertaining sounds to go with the new ailments
There's a fart joke built into the game

So Operation isn't the next big Ameritrash hit, but it's fun for kids and grown-ups will get a couple chuckles out of it. You can get it here:
http://www.unclesgames.com/product_info.php?ref=3&products_id=11118
Posted by Matt Drake at 6:29 AM

A true classic, very cool they redid it. My friend has Simpson's Operation with Homer on it, and it is fun.
i think once you hit 50 or 60 this may become a tough game once again?