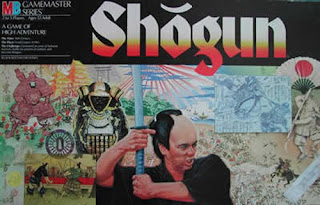 When you start talking about the game Shogun, you have to clarify which one you mean. There's a sort of Euro game out there called Shogun, whose most identifiable feature is a dice tower that doesn't work right. Then there's an old game called Shogun from Milton Bradley that got renamed and called Samurai Swords, and it's so out of print you can mostly only find it on eBay. This review covers that old one, not the new one with the wacky dice tower.

You may be wondering why I'm reviewing a game that's over 20 years old, out of print and not even called what it used to be called. I've got two reasons - first, some readers were talking about the game and asked what I thought of it, so I figured I would give it a spin and tell them what I thought. The second reason is that I've had the game for two years and haven't had a chance to play it, and a review was the perfect excuse to squeeze in a game.

I've been really lucky recently to get a local game group started (if you're in Arlington, Texas and want to play some games on a Saturday afternoon, drop me a line). The people in this group are awesome, but I've decided that just in case they all like me, I need to give them nicknames so that they'll have a good reason to kick me in the shins next time we meet. For the purpose of this review, I'll only be naming three of them, since those are the guys I played with when I was playing Shogun last weekend.

Rockford is a high-school teacher and a mad gamer, and last time we played he showed up in a Hawaiian print shirt that showed off his gray chest hair like an 80's TV detective, only about 20 years older. He's funny, and tricky, and often pulls out moves you never saw coming. Spaz is an Asian student studying at the local university, and he's smart and shrewd and a tough player. He also throws the dice on the floor about as often as he hits the table. And finally, The Shark is an unassuming, quiet dude that seems like he ought to be an easy mark, but he wins just about anything he plays. I've never won a game when The Shark was playing.

So we sat down to play Shogun last Saturday, and the first thing we had to do was explain the rules. Between explaining the rules and setting up the game, we didn't get started for about 45 minutes. It took Rockford three tries to understand how it works to hire the ninja, and Spaz kept slowing me down to repeat stuff I said too fast. So at the start, I was a little worried, because that's a lot of rules.

Then we started playing, and all worries were set aside (except that once he figured out he could hire that damned ninja to spy on us or assassinate people, Rockford got him every time). Hot damn, Shogun is a fun game.

Basically, Shogun is Risk, but in Japan. You can be the Shogun if you can grab 35 provinces (and then you win). There are about 60 provinces on the board, so that means you'll need to do some pretty hardcore smackdowns to win this one. But unlike Risk, where the board gets really messy with all the armies you build, Shogun has three armies on a separate card that let you see exactly what troops are in your mobile military forces.

There are other differences, like the way turn order is determined by drawing plastic swords with diamonds on them, or how, when you lose a province, you have to give up the card showing it and it sits empty on the board until someone claims it. Attacks all have to be declared at the same time, so you can't go, 'wow, that didn't work like I had hoped, I better send in these other guys.' And sometimes you'll declare an attack that might not do any good, just to hedge your bets.

The amount of strategy in Shogun blows my mind. There's a fantastic mix of strategy and tactics, and lots of room for pulling rabbits out of your sleeve. For instance, when I declared a double attack on Rockford's weakened army, surprise ronin popped up to fight me, and then the ninja killed the general of one of my attacking armies, after which Rockford proceeded to stomp a mudhole in me.

There's also lots of dice rolling. When you fight a battle, you go through step-by-step rolls for each kind of combatant - first the bowmen, then the gunners, then the daimyo, and so on, so the dice just keep rolling. Which means that Spaz has plenty of opportunities to stand up, get excited, and then hurl the dice halfway across the room. The odds still work out so that the better player will win - the dice just make things interesting (and even more interesting if you have to keep hunting for them on the floor).

And the best part is that adequate planning and distribution of your armies will make you a really tough player to beat. The Shark quietly consolidated most of the southern part of the main island, and by the end of the third turn, had three huge armies rolling across the country virtually uncontested. In the meantime, Rockford, Spaz and I just kept smashing into each other, which The Shark used to his advantage by striking a couple diplomatic deals and quickly rising to power.

Unfortunately, I can't tell you how the game ends. We played for about two and a half hours, and then Rockford and Spaz had to leave. And at that point, we had just finished three turns. There's no way we would have finished before dark, and we started at 1:30 in the afternoon. Shogun is a big game, and a ridiculous amount of fun, but this isn't the game you should pick if you're short on time. This is a stay-up-late-with-good-friends game. This is not a quick-afternoon-pickup game.

This is also a really pretty game. There are figures for bowmen, gunners, spearmen, and more. There are little plastic castles and a great big board with great art. The colors are subdued (and I'm not entirely sure part of that isn't a little sun bleach on my copy), and the art works wonderfully. Rockford kept exclaiming how much he liked the setup, and we all agreed. It looks great.

I would love to play Shogun again. I had a blast. It's part cutthroat, part planning, part tactics, and all fun. It's a huge game - the box is bigger than any other game I own - and it can take several hours to finish, even if you know what you're doing. But the whole time you're playing, you'll be having a great time, especially if you can rope Rockford, Spaz and The Shark into playing with you.

I don't have the foggiest idea where you can find a copy of Shogun. If you do look for it, you might have better luck looking for Samurai Swords, which is the same game. That way you won't accidentally buy a Euro when you're trying to buy Risk: Japan.
Posted by Matt Drake at 11:10 PM

Shogun(Samurai Swords) is one of the best games of the Gamemaster series. It can be a long game so having the right people involved is important but the game is a blast so the time just flies while playing it. Great review, Matt!