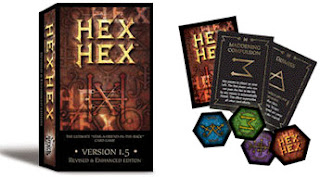 So it's game night, and you want to play something easy and fun, but most importantly, you really hate your friends. You need Hex Hex!

Hex Hex is a crazy little card game from Smirk & Dagger Games, whose motto is "games are a lot more fun when you can stab a friend in the back." And they do their best to live up to that motto with twisted games like Run Candyman Run, where you tear a little gingerbread man to shreds, and Cutthroat Caverns, which is a little like a cross between HeroQuest and a street mugging, but with cards.

In Hex Hex, you and a handful of people you like to hurt each get a hand of five cards. Then someone launches a hex at someone else, and then wacky hijinks ensue. The target of the hex has to deflect, dodge, or redirect the caustic spell or get blown up - but the deflection can't last long, because every time you avoid getting whacked in the pee-pee by the hex, you have to spend a card to do it. Sooner or later, someone is going to run out of cards, and then that guy is going to wear the hex like a cucumber face mask.

The cards used to avoid the hex are the stars of the game, and really the only component that matters. The easy cards say stuff like 'Deflect Across' (sends the hex across the table), 'Duck' (sends the spell to the next player to the right or left), or 'Turn Aside Right' (makes the guy to your right punch you in the kidney). These are pretty easy to understand, and easy to play, and if the whole game only had these cards, it would suck like the vacuum of space.

The real joy to Hex Hex is in the special cards that come in the box. You can boost the spell so that it does double damage when it explodes. You can split it into two identical hexes that bounce around the table and make everyone lose cards twice as fast. You can force it to travel to the right, exploding on anyone who can't pass it in that direction. But the really juicy cards, the ones that you hope you can pull, are so awful that you'll be begging for the opportunity to use them on your loved ones. Especially if it's Thanksgiving and you have to spend the whole evening with your family, and nothing makes you laugh more than angry cousins.

The really special cards are the coolest part of the game. They can make the hex blow up when it's on top of someone you don't like, or make everyone discard their cards, or get you extra cards (a decided advantage when hand size determines how long you're alive). There's a Deception card that you can use to fake out opponents. And there's the craziest card of all - Hex Hex, which makes the hex explode on the last player to throw down his cards and put his hands in the air. I totally did that last one to my son. It was awesome, and almost makes up for him hiding 50 half-eaten granola bars in his room until ants came out of the walls set up shop in his bed.

Hex Hex is not a traditional game. After blowing each other to magical fairy dust a few times, you'll have a winner - and that guy gets to make a rule for the next game. This can be anything, though he has to follow it, too. My son likes to make retarded rules like 'play with one hand in the air' or 'bark like a dog when you play a card.' My daughter likes to make totally benign (and slightly worthless) rules like 'smile all the time' or 'clap when you get your cards' or 'go totally insane because you're a hormonal junior-high girl who freaks out when her favorite shirt gets toothpaste on it'. Come to think of it, that last one applies all the time, whether we're playing a game or not, but my daughter is the only one who follows it. My son has a completely different set of psychoses.

Unfortunately, Hex Hex is not particularly deep. That's really irrelevant, given the fact that you're only playing to blow up people you pretend to like, but it's a consideration if you're looking for a strategic challenge. This is not chess - which is good, because chess is boring and Hex Hex sticks a magic firecracker right up chess's ass and lights it with an acetylene torch.

It may not be strategically challenging, but Hex Hex is a total blast, and the cards are beautiful. The art for the game is perfect. If you happen to be an artist for a living (like me), you might just pick up the game to be impressed by the combination of skill, talent and taste that went into this one.

One last note - Hex Hex is a fairly crazy game, but there may come a time when you're sitting around saying to yourself, 'blowing up my friends is all well and good, but what I really want is a way to make this really insane. I need Hannibal Lecter crazy.' And when that happens, you need to pick up Hex Hex Next, which has the same rules, but cards that are even more completely loopy. It's a little more complicated (God only knows how many times I just said, 'nobody move until we figure out who gets blown up!'), but it's far more unpredictable, and there are even more ways to shiv your friends like prison bitches.

Cons:
Not all that deep... but who cares?

If you like to play games where you hose your buddies, Hex Hex should be in your library. You can get a copy here:
http://www.funagain.com/control/product/~product_id=015666
Posted by Matt Drake at 9:54 PM

"'Turn Aside Right' (makes the guy to your right punch you in the kidney)."

I don't know if I want to play this card or not... Which kidney? The good one, or the not-so-good ones?

In your case, Jim, you may want to stick to something safer. You're a Euro gamer anyway. You should get a big kick of Darjeeling. You can collect tea!

This one sounds great. I got some friends who would love a game we get to throw Kidney punchs with the right card.

Have you played Gubs? It sounds similar, only maybe with better artwork?