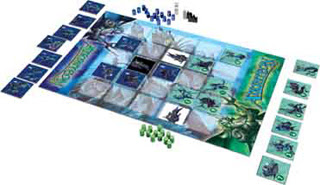 My last review was for Maginor, which I really like. It's a Reiner game, and I'm willing to admit that he makes some really good games. What I want to emphasize, however, is that he also makes some of the most horrible, overrated crap you'll ever have the misfortune to hate.

Which brings me to Atlanteon. I will not beat around the bush here - this game really, painfully sucks. It blows my mind how many people say they like this game, because I couldn't find anyone to play with me who didn't think it was horrid.

I came to own Atlanteon when Fantasy Flight Games sold a whole pile of games really cheap, right around last Christmas. It was a great sale, and I scored some really fun games. When the box came it was like Christmas - which was a weird coincidence, because it really was Christmas.

I punched out and played the games as quickly as I could, so I could decide which ones I loved. A few rose to the top. Some were OK. One in particular sticks in my mind, the way images of starving African babies stay with you until you die. That one is Atlanteon.

The box says that Atlanteon is a game of undersea conquest. The theme for this game is so weak, however, that it could be a game of dogs marking trees, or bums taking each other's subway vents in the middle of a New York winter. In fact, you could strip the theme off the game completely without affecting it in any way at all. The box ought to say that Atlanteon is a game of boring math with some pictures of sea monsters.

The fact that there's a theme at all is almost an insult, except that the art is really cool. The board is a grid with this kick-ass painting of an Atlantean city, with a mean-looking mer-dude perched on either side (yeah, it's the same merman, they just colored him different). Even the pieces look like there should be quality in the box - they're heavy-duty cardstock and wooden markers, and they're classy.

Too bad Reiner Knizia couldn't have been bothered to make some rules that actually went with these pretty pieces. Instead the game is a sleep-inducing math class. What you do is, you get someone who you're pretending is your friend, and the two of you take turns putting down numbered tiles to try to surround spaces. You don't want to leave room for the other guy to surround a tile, and if you do have to leave room, you want to make sure your tiles all have bigger numbers than his. When a tile is surrounded, you add up the point values for every tile around it, and the one with the higher point value gets to say that tile is his.

That's pretty much it. If you've ever played that stupid game where you connect the dots and try to block off squares while you wait for your dental appointment, Atlanteon should be a snap. You put down tiles until both people are out of tiles or one dumb bastard gets his king tile surrounded, and then the game is over and you see how many tiles each player owns. There's some lame crap about who surrounds castles or what-not, but it's irrelevant - the game sucks.

I wanted to like this game. I bought it, paid money for it, and I hate it when I pay money for horrible games. I can tolerate a mediocre 'meh, we'll break that out when family visits' game, but 'hide this crap so nobody knows we own a copy' games really bother me. So I wanted to like it, and to make sure I hated it, I played Atlanteon four times. I had to find four different people to play it with me, because nobody else had paid for it so nobody else was willing to subject themselves to the game twice.

Some people have asked me why I don't like Reiner Knizia. In all fairness, I don't entirely despise Reiner games. That's why I started this series of reviews with Maginor - that's a really fun game, and I don't want people to think I just dislike the man's games in general. He's obviously a clever guy, and when he puts his mind to it and does a little playtesting, he can make a great game.

But I have little patience for a man who could make great stuff and settles on making garbage he can sell. At this point, Reiner trades on his name, and manages to sell perfectly legitimate game companies total crap because they can put his name on it. When a game like Atlanteaon can be purchased at nearly every game store in the country, someone is a little too big for his britches (I mean Reiner, in case that wasn't clear). And when stupid suckers like me will buy these rotten chunks of mucal fungus because of his name, someone is too dumb to know not to buy a game just because it's on sale (in this case, I mean myself).

Now maybe I'm being too hard on the guy, but I tend to think that if Atlanteon had been Reiner Knizia's first game, there would not have been a second. I tend to think that Reiner's early games had to be better than his later games, because otherwise nobody would know who he is today. He's the Quentin Tarantino of board games (seriously, did anyone like the last half of Grindhouse?).

So now you know why I don't like Reiner games. I don't actively avoid his games, it's just that I don't really care if his name is there or not.

Join us next time when I'll review Beowulf, another Reiner game I enjoy. Then I'll wrap with one more I hate because it's as cathartic as beating rude children.

Pros:
It's from Fantasy Flight, so it's pretty
You can get it real cheap
Finished in five minutes, so you can go play a game you like

If you want to get yourself a copy of Atlanteon, I suggest looking here:

Can I take that idea of bums fighting for vents in New York? I'll mention you in the credits - I promise.

Actually, I think Reiner is using that theme already. He's making a game where you add some numbers together to get new numbers, and pretending it's all about New York homeless.

Matt - that is a funny review. The look for it at: URL - Very Funny!