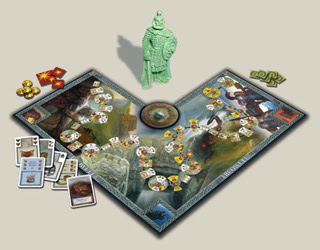 Reiner Knizia doesn't specialize in themes. He's a math nerd, and his games are often mathematical exercises. Check out the Atlanteon review to see what I mean. For that matter, check out nearly any Reiner game ever made. Just about all of them entail more math than I generally want to do, whether I'm playing a boring game or balancing my checkbook. Beowulf is the exception, and it's a wonderful exception.

Unless you dropped out before your senior year (or you're under 16, and your parents would not approve of you reading my reviews), you've probably read the tale of Beowulf. But my 12th-grade English book left out a lot of stuff, like Beowulf raiding Friesland and becoming king and getting poisoned by a dragon. I hope I haven't ruined the story for you, but then, I don't really care. If you don't know the whole story, you will after you play this game, because Beowulf: The Legend starts with sailing to Denmark and ends with Beowulf's death.

In Beowulf: The Legend each player takes on the role of a friend and ally of the great hero. You join him on his exploits as he rips off Grendel's arm, kills the monster's mom, and all that other heroic stuff. And as you go, you try to get fame and fortune, so that when Beowulf finally dies, you can take over as king.

The mechanics of the game occur in episodes. One episode might be Sail to Denmark, where another is King Hygelac and yet another is Swedish Betrayal. At each stop along the hero's journey, players bid for fame, fortune and cards. Each stop is different, too - good things in Beowulf's story let you stock up on the cards you might need, while the dangerous scenes might just entail avoiding loss or injury, but might get you some fame or treasure as a reward for surviving the scene.

Each player carries a hand of cards showing axes, helmets, longboats and other Viking stuff. Each encounter where these cards come in handy shows two pictures, and players try to have the most of whatever is showing at that episode. If this sounds complicated, that's because it is. I'm not going to run down an eight-page rulebook in a game review, so I'll just tell you that it's fun. Players will be trying to out-bid opponents, weighing risk over reward, and plan for future turns while making sure they get what they need now. Sometimes it's worth getting scratched up by the troll to have the advantage when it comes time to hunt down Grendel's twisted bitch of a mommy.

Players compete at the big conflict episodes, and each player gets something. The highest bidder might get a bunch of fame, the second bidder might get a little gold, and the lowest bidder might wind up with a bloody nose and nothing else. But at the next stop, that lowest bidder is going to be holding all the cards, while those high-rollers have blown their wad and don't have any way to keep from getting curb-stomped by Swedish backstabbers.

Despite having rules more complex than I intend to relay in a game review, Beowulf is actually very easy to play. There are icons everywhere to remind you of what you're supposed to be doing, and everything tricky has a very clear description. I've played the game with a 9-year-old, and she understood it just fine.

This game is the optimal mix of Reiner cleverness and theme. The great story is inseparable from the game play, so you may not even recognize it as a Reiner game (I know I didn't). Then you get to the beauty of the rules and nail-biting decision-making, and you can really see the Reiner genius. If you like theme, bidding, strategy and long-range planning, you should get a kick out of Beowulf: The Legend.

Beowulf: The Legend has everything I like in a board game. There's great theme. There's fantastic strategy. There's tough decision-making. There's beautiful art. If the only Reiner games you ever play are Maginor and Beowulf: The Legend, you'll probably think Reiner Knizia is God's gift to gaming. I would certainly stop playing his games before you get to the Lord of the Rings kids' game, because MAN ALIVE is that a stinker. Like dead-body-in-the-sun stinky. It's so bad, I'm going to review it as the last game in this Reiner series, because that will be fun.

Cons:
Takes a play-through to understand the rules

If this review makes you want a copy of this game, run over to the FFG website and buy it. You'll be glad you did:

Love the game. I thought the theme was in typical Reiner fashion though... Its mechanic driven with a theme painted on top. Its a cool theme that somewhat tells the story if you're paying attention, but man alive have you ever read the flavor text in the rule book that goes along with each event? Terrible.