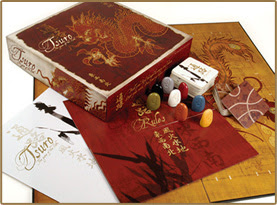 Ancient China was steeped in tradition. One of those traditions was the Boys' Night Out, in which the emperor would gather a handful of cronies and call up a bunch of expensive hookers. Then everyone would hit the opium pipe, drink the rice wine and party all night. In those few hours before dawn, the security guys would pay the call girls to leave, and the emperor would roust out his loser buddies to play some games, just to while away the time until the cleanup staff hid the evidence from the emperor's 47 wives.

The emperor's favorite game was Tsuro. This game involved a bunch of silk carpets with paths painted on them, a stone platform 60 feet in the air, and slaves. The emperor and his cronies would take turns placing the carpets to make paths, and the slaves had to follow the paths. When a player's path led off the edge of the platform, the slave had to jump off, and the player had to drink. The last player with a slave on the platform won the game and got to go home, though just to be fair the players still threw the last slave over the edge when the game was over.

(Some of this story is unverified. Reliable counter-sources indicate the game was actually played using the hookers instead of slaves, to get out of having to pay them.)

Thousands of years later, archaeologists dug up a scroll depicting the game. It had been shoved up the ass of a terra cotta soldier, and still never would have been found if it hadn't been for a severely confused grad student who was, ironically, drunk as hell on rice wine.

At first, purists wanted to recreate Tsuro accurately, but while the Chinese government could readily find plenty of people they could spare as playing pieces, nobody really wanted to let them walk on silk carpets. Those things are expensive!

So instead, WizKids bought the rights from the grad student as he recovered in a Hong Kong emergency room. They reduced everything down so it would fit in a box, and mass-produced it for an American market. The greatest thing is that it's still made in China, as a nod to its roots. And occasionally, a small Chinese sweatshop worker will fall into the plastic vat and wind up baked right into the game. We call that history repeating itself.

When you buy a copy of Tsuro, you won't get any of the classy pieces the emperor used. Your silk carpets are replaced by heavy cards, and instead of being four feet across, they're about two inches square. The stone platform has been replaced with a foldout board, and instead of slaves (or hookers) the game comes with a bunch of plastic tokens that look like engraved stones.

Considering the fact that you can't get silk carpets at anything resembling a reasonable price, the pieces in Tsuro are actually really nice. Nice enough to leave out when company comes over. There's a cool picture of a dragon, some crazy phoenix thing on the board, and the colors of the player tokens complement all the art beautifully. All things considered, this is probably better for most homeowners than the enormous stone platform, and better for most married men than a box full of Oriental call girls.

Each player starts off with three cards. You place a card, then slide your token on the path you just made. These paths bend and cross each other and sometimes even just go in a straight line. As you build your own path, the other players are building theirs. And sooner or later, somebody is going off the edge of the board. Happily for American players who don't have time to hide bodies, the only thing that goes anywhere is the little plastic token. The last player with a token on the board is the winner.

Unlike the ancient Chinese version of this game, which could take hours to complete, what with all the carpet arranging and body removing, the American version of Tsuro can be finished in less than fifteen minutes. Lots of times the game is done in five minutes. So even if you get driven off the edge, you can just grab some pretzels and open another beer, and be back in for the next game.

Of course, American players and ancient Chinese players have different reasons for playing Tsuro. The cronies had to play Tsuro or the emperor would have them killed. Americans are just playing to kill five minutes while they wait for the last guy to show up. Very few players are going to break out Tsuro and expect anything like a strategic challenge. It's not a game that begs to be replayed, because you know how it's going to go - you play for five minutes, run out of options and die, and then two minutes later everyone is picking teams for Trivial Pursuit.

Tsuro is a very pretty game. It's not on the caliber of Front Porch Classics, with their metal figures and cloth game boards, but it's still nice enough to leave out when people come over (as opposed to gamers). It has all the depth of a puddle of parking-lot runoff after a five-minute rainstorm, but it's fun enough that you can blow through a couple games before everyone gets into some serious gaming.

Cons:
Almost no strategy to be had anywhere

If you're looking for something to kill a few minutes, or you just want something you can play with your cousins when they come over for Thanksgiving, you could do a lot worse than Tsuro. Get it here, if you're so inclined:

The artwork was beautiful and it was a high quality set but I felt like I was playing a game of Chinese Tic Tac Toe. It literally game down to who got the last piece. More based on the luck of the draw versus stra tee gee (Bugs Bunny)

Tom McMurchie invented this game, and I'm his agent.

We were both highly amused at your history of the game, and have shared it around.

You clearly have a first-class ticket on your flight of fancy.

My group played this 3 times tonight, and it wasn't even my copy. We had a pretty good time with it, too. My first 5-way (yes, I used protection).