Horrid Game Review: Lord of the Rings (for kids) 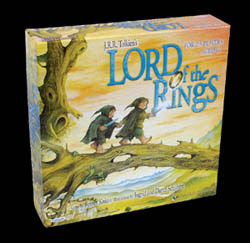 There's a riddle in Germany. It goes, 'how do you get Reiner to make a bad game?' The answer is, 'make him start with a theme.'

That riddle isn't very funny. In all honesty, it's not even a real riddle. I just now made it up.

Real or not, though, I maintain that this riddle is true (that's probably why it's not funny). If you make Reiner Knizia start with a theme and try to build rules that match it, you're just begging for trouble. Everyone knows real Reiner games are supposed to have interchangeable themes, so you could make Through the Desert into a sci-fi game or make Kingdoms into a game based on a movie. Say, Beowulf.

So when Reiner Knizia starts off with Lord of the Rings instead of some wacky adding mechanic he came up with while he was fixing his calculator or counting his money, you know there's trouble a-brewing. And then make him take that theme and make it into a kid's game. If there was any hope of this being a cool game, it's gone now. But that's what he went and did in the Lord of the Rings game for children.

In this light-hearted adaptation of Lord of the Rings (you know, that trilogy about the ring that dominates minds, and the horrible entity that seeks it and destroys all before him? Yeah, that light-hearted story), the players each take on the role of one of five hobbits.

No, I didn't type that wrong. There are five hobbits. Apparently, you can play as Merry, Pippin, Sam, Frodo, or Brian Epstein. That's the hobbit who didn't make the final cut and was heartbroken to be left behind, until he found out that the other four had to get chased around, tortured, beat up, frozen and otherwise abused, while he was left home smoking a bowl of Longbottom and banging Sam's lonely girlfriend. Then he didn't mind as much.

So anyway, all the kids pick out a picture of a hobbit and they get a matching wooden token to move around the board. There's a path, just like Candyland, except that the path branches, so you can cruise through Moria and Mirkwood or take the scenic route through Barrow-Downs and Isengard. You roll a die and get to move on the path you choose.

When you get to a place with a name, there will be a disc with a picture of a friend or enemy. You can fight the enemies (hobbits were kick-ass brawlers, is what I hear) or befriend the friends. If you don't win the fight/negotiation, your turn is over.

The fighting system makes a huge amount of sense in a kids' game. There's a spinner with four spaces on it. One space has two red blocks. One space has three. One space has one block and a picture of a black bird, and the last space has a spooky red eye that your kids will see in the closet after you tuck them in and turn off the light. You spin the spinner and remove the number of blocks from the enemy, unless you roll the horrible red eye, and then your turn is over. If you've pulled off all the red blocks, your kung-fu is more powerful and Billy Preston is able to shiv the Uruk-Hai in its sleep.

These are obviously very tricky rules, which is why this game has a basic version and an advanced version. God knows your kids are suffering from Down's Syndrome, and could therefore not handle advanced rules until they mastered the basics of rolling a die and then spinning a spinner. In the advanced game, you can throw away your friend cards to avoid capture or take another turn. This advanced tactical possibility proves one massive, important point - there's no way Reiner has children, or he would know that they're not all retarded.

I would like to say that this Lord of the Rings game has limited strategic decision-making, but if I did, I would be exaggerating. That's like saying Death Valley gets limited rainfall. You roll the die, then you move, then you spin the spinner, then your turn is over. This is Candyland with hobbits and orcs.

Making games for kids is tricky, I'm sure. Chutes & Ladders and Cooties have apparently made game designers think our kids all have persistent brain damage from which they fully recover at age twelve. I don't know about you, loyal readers, but when I was six, my dad taught me checkers, and when I was eight, I played chess. I know seven-year-olds who can whip me at Connect Four. The point is, kids are smart enough that after they hit kindergarten, you can break out rules with a little meat on them.

Lord of the Rings fails completely for many reasons. First, if you're going to make a theme game, try to follow the theme. I can't figure out who this fifth hobbit is supposed to be, but I would love to know how he's able to throw a beating on the Witch King of Angmar. The Nazgul are represented by black wooden tokens that were evidently taken from a game about ravens, because they just look like big black birds, and they don't do a damned thing except move around the board and be a pain in the ass.

Another reason the game blows is because the game itself has no meat at all. The entire thing comes down the toss of a die and the spin of a spinner, and even kids are smart enough to see right through that. Any kid old enough to have outgrown Candyland will be bored to tears by this game.

Reiner Knizia is obviously a clever guy. He's able to make some really cool games with really cool mechanics. He's easily the world's most successful board game designer. But few game designers are able to so completely ruin a game. Other game designers would have to test the game for a long time and iron out all the kinks before they sent it to a publisher. For some reason, Reiner can crap out a game on a piece of toilet paper and get somebody to publish it, and every now and then, that's exactly what he does (metaphorically speaking, of course).

This concludes my series on Reiner Knizia. Just for laughs, I'm going to review a video game next. If you've been wondering what Gears of War is like, come back in a couple days and I'll tell you all about it. And in the meantime, sleep easier knowing that Reiner's Lord of the Rings kids' game is out of print.

Cons:
Takes the richest theme a game can have and ruins it
Somehow has four pages of rules designed for people too young to read
More luck than roulette
Five hobbits

You can probably find a copy of the LotR game for kids around here somewhere:

Yeah, I love that in so many kids games on the market the only strategy that will help to ensure you a win is cheating.

Great review, Matt...sad as can be about the game and a great designer on a disasterous course down a steep hill.