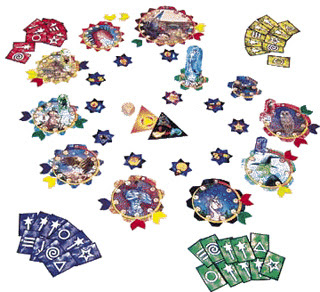 Maginor is a pretty old game. I actually bought it long before I ever started reviewing games. It's from the Silver Line of games from Fantasy Flight Games. Since this is an older game, and it seems odd to review a game this old, I'll explain exactly why I decided to make it my third review here at Drake's Flames.

If you read my introductory post, you may have noticed that I'm not a big fan of Reiner Knizia. You may be wondering why I dislike Reiner games (yeah, I'm going to be all flippant and refer to the man by his first name, despite never having met him, because I can pronounce 'Reiner' and 'Knizia' sounds like Polish food). So I decided to review four different Reiner games and be crystal clear exactly why I like to say bad things about the world's most well-known game designer. We'll lead off with a great Reiner game, and then I'll get into some real stinkers.

So back to Maginor. To start off, Maginor is not like most other Reiner games in that it has a fairly decent theme, one that doesn't feel like it was pasted on after the game itself was designed. The time has come to choose a new High Wizard, and the potential successors (the players) must garner the support of not just the wizarding council, but a panoply of oracles. Centaurs and dragons, witches and unicorns must all be wooed to gain their support, for without the support of these supernatural allies, you don't stand a chance of taking the top job.

So the players hit the election trail. They have spells ready to cast to impress these unearthly creatures, but time is not on their side, because the current High Wizard (his name is Maginor, which explains the game's rather silly name) is making the rounds and asking the oracles to commit to their favorite candidates. Players must travel quickly and persuade effectively to get the oracles to back them, because once Maginor talks to an oracle, the votes are collected and there's no point in going there again. Kind of like New Hampshire.

So far, this is almost as un-Reiner as a game gets. Theme in a Reiner game is like a baseball uniform on a little league team - you've gotta have one, but it doesn't really matter what it is. So for Maginor to lead off with a theme this deep means it's not your average Reiner game.

There are twelve oracles, each with different values. It's a lot better to get the big red dragon to vote for you than to get the wise old owl, for instance. That makes sense - the red dragon has lived for thousands of years, and is a powerful creature. The owl can only tell you how many licks it takes to get to the Tootsie Roll center of a Tootsie Pop. But the owl is easier to persuade, so players may focus on the smaller targets and let their opponents fight over the dragon's attention.

To get support from an oracle, a player has to travel to an oracle and then cast a spell using one of the four elements. To cast a spell, a player rolls a die that has six different symbols. If an elemental symbol shows up, the player places one of his vote markers on the oracle next to the corresponding symbol. If the star shows up, the player usually gets to choose which symbol gets the voting marker. And if the die shows the hat, the player still gets to choose, but Maginor moves forward. Choosing your symbol only matters in case of ties, because the top symbol always wins ties.

As Maginor moves forward, he talks to the oracles and collects their votes. If the players have spent enough time campaigning at a particular oracle, they get to collect the support of the oracle. Once Maginor completes his rounds and gets back to the High Council, support is added up and the player with the highest total support wins, and gets to be the new High Wizard.

If all you did in Maginor was move to a location, roll a die and wait to see who wins, the game would suck. It would be really boring, and my kids would probably want to play it all the time. They seem to have a soft spot for games that make me want to tear out my eyes. Happily,
Maginor has quite a bit more.

For starters, each player gets a handful of spell cards. These let the player choose which symbol to place on an oracle where they're standing, or lets them roll on an oracle where they're not standing. You can only roll for your location once a turn, but you can use all the spell cards you want, so you can use spell cards to force an oracle to throw all its support behind you in one turn. The trick is, once you use a spell card, it's gone. A smart player will save a few for the end, to have the deciding vote where he needs it, but if other players snatch up all the prime oracles early on, it won't matter if you do have spell cards left, because there won't be anything left worth grabbing.

Then there are second-place prizes at every oracle. See, the oracles will support the candidate they like the most, but they feel sorry for the runner-up, so they give them consolation prizes. I'm not sure why the Sphinx feels sorry for anyone, but if you come in second for his attention, he'll throw you a bone.

These runner-up ribbons can save your bacon, because these are really powerful spells. They let you move for free, or bump out another player's vote, or even reclaim some of your spell cards. In some cases, a player who wins an oracle may even decide to take the spell instead, because being able to break the tie at the High Council is worth a lot more than getting the support of some lame pixie.

I have played Maginor countless times. It is easily my favorite Reiner game, and one that gets pulled out of the game closet more often than most of my other games. That's impressive, especially because I have a lot of games. My kids like it enough to play it a lot, my wife will play with me, and my dad even plays with us when he visits. It's a really fun game that requires minimal setup and plays in about an hour.

Plus Maginor looks great. That's not a surprise - you don't see Fantasy Flight Games making ugly games on anything like a regular basis. I guess FFG is like a sorority house full of cheerleaders - now and then their stuff might be boring, but it's almost always pretty.

If Maginor was the only Reiner game ever made, I could get behind Reiner Knizia 100%. This game is fun, pretty and easy to play. It's affordable, too - twenty bucks and shipping can make it yours, and you can probably even find it cheaper somewhere. I heartily recommend Maginor to just about anyone who likes playing board games, because it's got enough theme, strategy and plain-ol' fun to please nearly any gamer I've ever met.

So why don't I like Reiner? I'll tell you next time, when I review Atlanteon. Because man, does that game suck.

Cons:
There really aren't any. This is a really good game.

You can get your own copy of Maginor right here:

http://www.fantasyflightgames.com/maginor.html
Posted by Matt Drake at 1:29 AM

Maybe I need to go back and play this again, because the first time we played it, it didn't seem as great and awesome as you make it sound.

I'm willing to admit that it may not be for everyone. I also know there are other places you could read about this game. Hell, go check out the Geek - they've gotta have a review up.