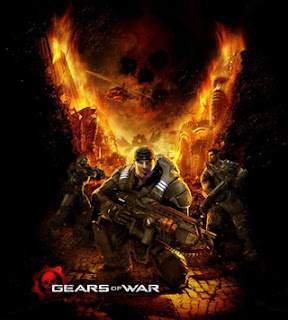 You know how in war movies, when the good guy comes face-to-face with some bad guys, he always pops out from behind cover and starts walking sideways, sometimes completing a full circle around his targets who, for some retarded reason, always shoot right where he just was? That's how Rambo does it, right?

No? Well, maybe that's because if you tried that circle strafe horse crap in real life, the bad guys would be smart enough to shoot you before you were able to kill 50 of them without ever having to hide behind a rock to wait for your armor to recharge. And since anyone with any sense knows that doesn't really work, why have we adopted such a technique so readily in video games, and never stood up and said, 'I call BS! This doesn't make sense!'? If you don't play shooters, you don't know what I mean, and if you do, you're sitting there nodding your head and going, 'hellz yah bitches dats how i roll'.

(I should interject at this point and state, in the interest of full disclosure, that I will be mocking video gamers at every possible opportunity, despite being a huge fan of video games. Anyone who has ever visited a forum for Grand Theft Auto has had to plow through endless threads involving people cursing each other in cave-man English, and anyone who has ever played Xbox Live has had the opportunity to mingle with some of the world's most misanthropic idiot children. Some of those idiot children are actually adults, and in many cases have idiot children of their own.)

I guess the silliness of the circle strafe is what the designers of Gears of War were thinking when they made their game. Because if you try a circle strafe in this game, your enemies will blow so many holes in your ass you won't know which one to poop out of. In Gears of War, you have to hide behind stuff, like short walls and piles of rubble, crouching down to avoid catching a bullet with your face, and poke your gun over the top to spray bullets at random toward bad guys who are hiding just like you and only popping out now and then to hose down your hidey hole with their own automatic weapons.

That's only one of the things that makes Gears of War a lot more gritty than your average shooter. Other factors that make the game gritty are things like believable blood sprays and a chainsaw on the end of your gun that lets you cut a bad guy into very gnarly chunks. The fact that your character spends the whole game covered in a thin layer of grime doesn't hurt, either.

The graphics lend a lot of grittiness to Gears of War, too. They're beautiful, taking full advantage of the 360's graphics, but almost anywhere you go has been blown to shreds before you got there. There's rubble everywhere, boarded-up windows, bomb craters, broken glass, and assorted other mood enhancers that make you feel like you're in the middle of a war zone. And to make matters even more interesting, all the characters in the game are built like professional weight-lifters. Everyone in the game looks like it's completely normal to take more steroids than Barry Bonds and Rafael Palmeiro put together. Even the bad guys, gruesome alien humanoids, eat too many Wheaties.

The story behind Gears of War is not particularly deep, but it's fun anyway. It seems that instead of being invaded by aliens from space, Earth was invaded by aliens from space that were hidden underneath the ground and popped out. You can see the difference between this and... every other shooter where aliens invade. Instead of boarding alien space ships to kill the invaders, you have to go crawling through grimy tunnels to kill the invaders. So that makes it completely different.

In all fairness, there is a decent story, with your guy (Marcus Fenix) being sprung from prison to help fight the Locust (that's bad guys to you and me). The unfolding plot of the game could basically be turned into a big-budget Hollywood B-movie and probably make a decent amount of money. It falls somewhere between the 'proceed to next stage and kill enemy' plot of most shooters and the 'who the hell is that guy?!' convoluted madness of a Japanese RPG. But any more, you can find some kind of plot in just about any game, so even an evolving story doesn't make Gears of War all that different from every other kill-the-aliens shooter on the market.

What does make the game completely different is the cover thing. You can no longer run around willy-nilly, shooting from the hip and sniping on the fly, because if you don't grab some cover, the bullets out there will tear you right to pieces. You can crouch behind cover if it's low, lean against cover if it's tall, and jump from one piece of cover to another. Then you stick your gun out and spray some bullets, and if you're feeling lucky (and ammo-conscious) you can also stick your head out and spray some bullets.

This cover concept is not entirely new, but it is a dramatic advancement for shooters in general. Grenades become a lot more valuable when you can't shoot your enemy from where you're sitting, and you can't circle around because if you leave that pile of rubble your friends will carry you back home in a collection of Ziploc bags. You can't even really call the cover mechanic a gimmick, because in this case, it's integral to the game. And more than that, it feels a lot more like a fight when you can't dodge a bullet just because you're walking sideways.

Unfortunately, Gears of War has a problem, and it's not the departure from the norm. The real problem is that when you put it next to some of the other shooters you can get, it just doesn't hold its own. Especially now that you can compare it side-by-side with Halo 3, the controls just don't seem as smooth as they should. In Halo 3, I never feel like I get killed because the controls don't do what I want (it's usually because I can't shoot for crap). In Gears of War, that happens relatively often, usually because my guy won't grab cover when I want, and happens to be standing up when a bad guy lets loose with a chain gun.

But don't let my complaints here dissuade you - Gears of War is a blast. The single-player mission has to be seen to be believed, and before Halo 3 stole all its thunder (and the thunder of every other multiplayer shooter on the planet), there was a thriving online game community. You can still find people playing Gears of War Live, even though most of the hardcores have moved on to the next big thing. And there's a great co-op mode for the campaign game that lets you heal your buddies when the bad guys drop them.

You just can't say lots of bad things about a game that lets you run up to an enemy firing full-auto, and then when you get close, chop off his face with the chainsaw underneath the barrel. The graphics are top-notch, the missions are varied enough to stay interesting, and the cover mechanic makes every fight feel desperate. It's not for everyone - I don't let my kids play games where you can chainsaw enemies into dog food - but it's a very fun game if you can get over the occasional death-by-control scheme.

Cons:
Controls don't always do what you intended
Community has suffered since Halo 3

I really enjoyed Gears of War, even when I was getting shot to death because I couldn't tell my guy to keep his head down.
Posted by Matt Drake at 8:54 PM