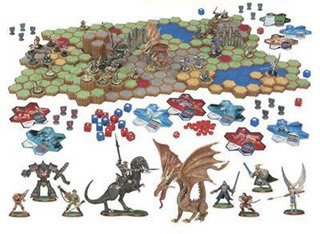 Usually when I start a review, I have to pull the game out of my collection so I can have it handy. I need to be able to check the rules, designers, art - stuff like that, just to make sure I've got my facts straight. I don't have to do that with Heroscape, because I really, really know this game. It's my favoritest game ever in the whole wide world. If Heroscape were a girl, I would marry her. Except I think my wife would kick me in the jimmy if I tried to be a polygamist, so I'm probably better off with Heroscape being a whole lot of plastic.

The funny thing is, the theme of Heroscape turned me off for a long time. I kept seeing it and thinking, 'robots versus elves? This is dumb!' Even after I read the background information, I still thought it was dumb. And you want to know something? After more than three years of playing Heroscape, several tournaments and hundreds of games, I still think the premise is stupid. Maybe I'm just a snobby genre purist, but I don't like having orcs on dinosaurs battling alongside the 101st Airborne, or having Charlie's Angels throw makeup powder at soldiers of the American Revolution. Throw in giant anthropomorphic snakes, werewolves, ninjas, dragons and Captain America and I can't even imagine a dumber theme. It's like when the school cafeteria mixes all the leftover lunches for the week and passes it off as sloppy joes.

So for Heroscape to be my absolute favorite game, it has to have a lot more than theme. It has to have a good mix of tactics and strategy (yeah, there's a difference). I have to be able to make every single game different from the one before. I have to be able to customize it. It has to combine the genius of deck-building with the tactical maneuvering of a miniatures game, and do it all with simple rules that allow for a dazzling array of options.

Heroscape does all that.

First off, it's a miniatures game with pre-painted figures. That is a huge draw, because what starts as a game turns into a toy, and I love toys. Then you've got this incredible, hex-based, interlocking terrain from which you can create just about any map you can imagine. I've seen towering castles, frozen caverns, and I even saw one map that looked like Grand Central Station. Even if it bothers you to have a samurai getting kicked in the nards by a Roman legionnaire, you have to admit that any game that lets you build a to-scale, three-dimensional, fully-playable map of Hoover Dam has a lot going for it, especially if you can use those same pieces to make a ruined temple in a wintry forest.

The rules go with the pieces the way peanut butter goes with jelly. They're easy to understand and brilliant in their simplicity. At the most basic level, you've got attack/defense dice. Anyone who has ever played a Stephen Baker game will recognize these dice - they've got three skulls, two shields and a blank side. The attacker rolls the dice looking for skulls, and the defender rolls looking for shields. More skulls than shields means somebody is getting a boot to the head. Of course, this means there's luck in this game, and in some cases, there's more luck than I like (don't get me started on DeadEye Dan). But the luck can be mitigated through army building and game play, so in my opinion, the luck comes out to a reasonable level.

To make it even easier to drop the pain, or to give yourself a better chance to block, you have to move around that killer map you just made with all those locking hex pieces. Height advantages, glyphs, adjacency, and special powers can all improve your odds of attacking or defending. A player with a weak army can often beat a superior force through improved tactical and strategic maneuvering.

Speaking of weak and strong armies, you get to build these armies yourself. Sure, you have to sift through a pile of vampires, cowboys and mechanical rats, but there are hundreds of figures to choose from, and you can make an army that does whatever you want. If you want a high-defense turtle army, you can do it. If you want speed, it's in there. Range, maneuverability, strategic options, tactical superiority - it's all here. Since every figure has at least one special power, and they all have different statistics, you can build an army that works the way you want it. You can put all your eggs in one basket and throw a couple powerhouse heroes on the front lines, or you can swarm your foes with dozens of cannon-fodder foot soldiers.

If you love being able to customize a game, Heroscape has your name on it. You can take miniatures from any other game and make Heroscape stats for them. That's no exaggeration - I've seen people make Heroscape units out of six-inch action figures. Mage Knight, Dreamblade, Warhammer, and Haloclix - all these games are great sources for Heroscape customs, and there are plenty more.

You can also make custom terrain for Heroscape. Some fans go so far as to flock entire terrain sets, put reeds on their water tiles and snow on the trees. I have a crashed airplane and a graveyard that were both custom-made Heroscape terrain, and the great thing is that they are completely playable.

A game like Heroscape screams for expansions, and the good folks at Hasbro are more than happy to accommodate. There are dozens of blister packs of expansion figures available, and several boxed sets to let you add roads, bridges, trees, snow, ice, castles and swamp - and there's more coming. Individually, most of the sets are very reasonably priced. Of course, you'll have to sell plasma to get everything for the game that's available now, but at least you know you've got options. Hopefully, you've also got lots of plasma you don't need, because even though Heroscape is not sold blind (you always know what you're getting), it's still very expandable.

All things considered, Heroscape is the game I was waiting my whole life to play. The incredible terrain, the pre-painted figures, the great rules, the customizable play - it's like I have been playing other stuff for years just as practice to get ready for this game. And there's an amazing fan base for this game - go to www.heroscapers.com to see what thousands of fans have created for their favorite game. With all that Heroscape has going for it, I can even overlook the fact that my team of soulless robots can be dismantled by a bunch of hammer-swinging angels and a sharp-shooting cowboy.

Cons:
A theme designed for third-graders

I can't recommend Heroscape enough. Go get you some!

Dude you left out the best Scape moment ever from your review.

Imax:"You sure you can do that? maybe you should check the rule book."

CVN:"Un I designed the game"

or something to that effect. (Where's that youtube video link when I need it)

Thanks for the great review, Matt.

Chris, that's YOUR favorite Scape moment ever. Not mine.

(To my reading public: The downside to having a review site read by your friends is that sometimes your friends are 'tards.)

And no face punching!

It's everything you said but 1 thing. The Marvel edition theme is great. It comes to it probably happened in a comic out there. So if it works for Marvel and DC then it works now.

This game is awesome. I used to play it an average of 5 times per week (until that group unfortunately grew apart). I was very sad when they decided to discontinue the line, even though I hadn't played it much recently. It still takes up a giant section of my gaming closet.

Great review. I like the part about marrying Heroscape.

Heroscape still endures as one of the best games out there. It's such a great game that allows you to be creative. Half the fun for me is just building the sets.

Hasbro decided to stop producing Heroscape. Even though its out of print, there is still a ton of fans