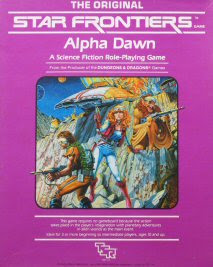 I think it's time for a science fiction series. I love science fiction games, especially if the theme is good enough to stick to your ribs. When I was a younger man, I played the heck out of Star Frontiers. I can still remember my character's name... no, wait, I can't. It was junior high. Sue me.

Anyway, I like sci-fi games, so I'll be reviewing three science fiction games this week. I'm going to sort of cover the spread. I'll lead off with Star Frontiers, a classic role-playing game from TSR, way back when games came in boxes, not books. Then we'll do a crazy little hybrid game called Battlestations, which combines the best of tactical space combat and frenetic role-playing. We'll wrap the series with another old classic, Mutant Chronicles: Siege of the Citadel.

When I was ten years old, I spent a weekend washing cars to earn enough money to buy the red box of D&D. I loved that game. I would DM my brother through the module that came with the game, and he would slaughter unsuspecting goblinoids left and right and steal their stuff. Then my dad overheard us playing, and that game went in the trash and he bought me Star Frontiers instead.

It turns out, I'm lucky he did that. I was pissed at the time, and swore I would hate Star Frontiers just because it wasn't D&D, but I was an idiot. I did mention I was ten, right? Star Frontiers was SO much more appropriate for a kid my age. Instead of chopping heads off kobolds to steal their headdresses made of human ears, I was an agent of the Pan Galactic Federation, exploring new worlds, breaking up crime rings, and foiling pirates. I was an undisputed good guy, and better yet, I got to fly a spaceship.

Star Frontiers remains in my memory as one of the greatest role-playing games ever made. It came right on the heels of Star Wars, when every kid in the United States wanted to battle bad guys in a starfighter. It had a fairly decent background, but not one I couldn't adapt as needed. I didn't have to read 300 pages of source material to decide where to stage my next adventure, yet I had enough background to choose a world and put a couple bad guys there and keep everything consistent.

Of course there have been other sci-fi role-playing games since then, but Star Frontiers is always highlighted as my personal favorite. I had a brief dalliance with Traveller, but it bored me to tears, because it was for adults. There was the classic Star Wars RPG from WEG, but I could only ever think of plots that were taken out of the movie, and there's so much background that everyone always knew more than me. There was one called Space Opera (the world's least original name - like if TSR had named D&D 'Fantasy'), but that was one of the worst games ever made in any format, so it really doesn't count. The owner of that particular intellectual property is probably holed up in a shack somewhere in Montana mailing scratch-n-sniff bombs to George Lucas.

Star Frontiers had four main races. First off, of course, was the human. Every game has humans. And the other three weren't even that original - you had the anthropomorphic monkey aliens called the Yazirians, the anthropomorphic bug people called the Vrusk, and the blob critters called the Dralasites. Not exactly stretching the ol' imagination to come up with bug people, monkey people and blob people, but when I was a junior-higher, I didn't care. I loved 'em all.

The core mechanic of Star Frontiers is still one of the cleanest and slickest systems I've ever played. You just rolled two ten-sided dice that were different colors to get a percentile result. That's all you ever needed - just those two ten-siders. There were modifiers, sure - stand up close to someone and use a weapon you trained with in the marines, and you'll do a lot better than firing a gun you've never seen before across a football field. But it was all easy to figure out, and it took me just two days of reading the rules to be ready to run the combats in the adventure that came in the basic rule book.

Which brings me to another reason I loved Star Frontiers - pre-made adventures came with the game. And better yet, there were hundreds of counters to use as miniatures, and double-sided poster maps, and you even got two dice when you bought the box. I can't think of an RPG that comes with dice these days, and most of them don't even have a starting adventure. And if they do have a starting adventure, most of the time it's some pathetic, half-assed crap nailed on when the game was done so the writers could say they included an adventure. But in the good old days, your boxed set of Star Frontiers came with two rule books (for basic and advanced), a sheet of counters, a double-sided map and a complete module. That's the way it was in my day, and that's the way we liked it!

Now, not everything about Star Frontiers was perfect. Anyone who has ever run a big gun fight in a star freighter's cargo bay knows exactly what I mean when I say that it was a logistical nightmare to keep track of health levels. The problem was that weapons tended to do damage in terms of 1d10 or 2d10, while health levels went up to 70 or 80. Add in body armor and ablat screens, and you could take about 30 direct hits before you ever fell down.

That actually reminds me of the worst battle I ever ran in any game. There was this group of monkey people who lived in trees (yes, a different group of monkey people, because God forbid the writers would come up with another race) and some pirates were attacking them. There were like a dozen pirates, fifteen or so monkey dudes, and the four player characters. I actually tried to track damage for every combatant, but after the fight had lasted two hours and nobody was dead yet, my little brother told me it might be better if I just said the monkey guys won. He was right, but I still had a pirate shoot him in the butt, just for telling me what to do.

Of course, as a kid, my solution was easy - I didn't count those hits. If a player took a hit, I made him fall down and scratch off ten points or so. If a bad guy got shot, I described how the blast hit his eyeball and killed him instantly, so that I didn't have to do math. As a kid, this was a perfect answer to a difficult problem. These days I would need an abacus to track any fight with more than two shooters. And hostage situations seem a little less urgent when the bad guy is holding the science fiction equivalent to a Nerf dart gun to the lab guy's head.

That's what made Zebulon's Guide so magnificent. It fixed a lot of the damage issues and even streamlined the resolution with a crazy little table. Instead of adding and subtracting all this stuff, you just slid up a column and rolled the dice, and a colored bar told you if you hit. It was a little odd, and complicated a system that I loved for its simplicity, but I was at least able to finish a shootout before everyone got bored and went home.

The greatest thing to ever happen to Star Frontiers, however, was not Zebulon's Guide or the white crayon that came with the box so you could color your dice (you old-school gamers remember this, and you teenagers with your fancy pearlescent dice and your $20 dice bags probably think I sound crazy). The best thing that happened to Star Frontiers was Knight Hawks, the starship combat expansion. Because all of a sudden, we were no longer limited to laser blasters in corridors. Now we could fire assault rockets at Sathar cruisers, dogfight with pirate fighters, and emergency land on a planet's surface because my idiot brother farted in the cockpit again.

If you have kids and you want to get them into role-playing games, you could do a lot worse than to pick up a copy of Star Frontiers. It's long out of print, but you can still find copies floating around. And if you just really want to play the game, that's not out of the question - there are at least two sites where you can download the rules to the game for free, and they even have the blessing of Wizards of the Coast, so you don't have to pretend to feel guilty about it.

So remember an easier day, when games came complete in a box, when good guys were good and bad guys were bad, when you could just sit down and play without having to worry about your character's back story or motivation. Draw your blaster, jump in a speeder, board a freighter and strap in for some old-fashioned RPG fun.

Pros:
Cool 1980s art
Simple system
Everything in one box!!!
Enough background to make a game but not enough to bore you

You can download everything ever printed for Star Frontiers right here:

I played a little Star Frontier as a kid, it was a great game. We actually played way more D&D , our parents never watched us playing games, and I loved the hack and slash fantasy game more.

Great write up - makes me want to find an old star frontier on E-bay.

I remember studying the rules, but never had anyone to play w/. Great concepts and inventory. Car Wars was comparable but it used multi 6d rolls.

Just read the review- absolutely excellent! Thanks for all the comments-brought back old memories...
I agree wholeheartedly: it was an age when games were good and they came complete in a box!
And yes I still remember the name of my Dralasite: his name was Thead...