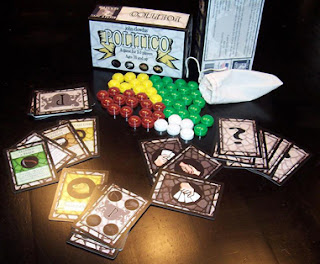 What the hell, I'm up late already. I may as well write a review to start this thing off.

Before I dive into my world- shattering review of Politico, I should get this off my chest - I know the publisher, and more incriminating, I like him. But before you start screaming that I've got a conflict of interest, please consider the fact that you can't be as involved in the business of game publishing as I am and not have some friends in the field. Hell, if I only wrote reviews for people I don't know, I would have to cut half my sources for review copies. So quit yer bitchin. Unless you weren't bitchin', in which case I apologize for insinuating anything untoward.

Politico is the first game from Small Box Games, a new game publisher specializing in Euro-style board and card games. The company is founded by the guy who makes all the games, a funny little dude named John Clowdus.

John Clowdus is the guy everyone hopes is going to be a success story. He designs his games himself, half in hopes of making it big as a game publisher, and half hoping to get picked up by a bigger publisher who will pay him to make games all day. His friends are his playtesters, and they get worn out with the games that don't make the grade. They got lucky on Politico, though, because this is a really good game. I'm not just saying that because I like John, either - I've played some of his games that really sucked.

Politico's premise is largely irrelevant, and honestly, that's not usually my preference. I like a theme so thick that the rules have to work around it. But I can still recognize a good game, and my kids prefer games that are simple and clean, so I play my fair share of Euro-type games. The theme in this game is something about an old king and heirs and an election, but since it's not a theme that really affects the game, I don't care and I'm not going to waste time explaining it.

The pieces in Politico are exceptionally nice, considering the fact that the publisher is working on a shoestring budget. The cards are better stock than I've seen in some big mainstream games, and the little follower markers are really nice plastic counters. For some reason there's also a little drawstring bag in the box, but since it doesn't hold all the follower counters unless you carefully stack them, I already threw that out.

The game starts with each player getting two action cards. These let you recruit or influence followers, and on any given turn, you can only do one of them. That's why they're on cards - so they can be secret. Unless you're like my son, who can wreck games just by looking at them, and you bend one card so the other players always know what you're going to do. Then it's not quite as secret.

There are two other decks of cards in the game. The first depicts the four different classes of follower - merchant, peasant, guild member and clergy. These have different colors, which match the colors of the follower counters. At the beginning of every turn, someone will flip over the top card from this deck, and all the actions will pertain to that particular follower class. The second deck is the influence cards.

Now pay attention, because this is where it gets tricky. See, everyone around the table plays an action card face down, and then the number of actions you get depends on the number of people who didn't play the same thing you did. So if you're playing with Betsy, Ralph and Hugo, and you play the influence action, and the other three play recruiting, that means you get four actions and they each get two. It also means you need nicknames for your friends, because your friends have silly names.

Recruiting is really straightforward - you just take one follower of the active class for each action you get. Influence is a little trickier, because you can draw off that third deck or play your influence cards. If you've got three actions, you could draw two cards and play one, or draw three cards, or draw one and play two, or play three cards, or discard cards that match the current class to get followers. (See? That's more complicated.)

The goal of the game is to get 13 followers, and you need one of each class to win. Those damned influence cards will kill you, too - some cards will make you throw away your merchants, some will let you steal peasants, and some let your followers change jobs. The game is in constant flux, because even if you have all four classes and 12 total followers, it ain't over 'til the fat lady sings. And that tubby bitch can be warming up backstage for a while.

There's a little more to the rules, but if you want to know what else you can do, go buy the game. What am I, Mister Wizard? It's less than $20, for crying out loud. If you can't figure out yet if you'll like the game, just pull the trigger and give it a shot.

Politico is a surprisingly good game, especially for being the first game from a fledgling publisher. The components are nice, the rules are tight, and it was obviously well tested. It's a quick, fun game that you can play with your kids, or you can break it out at a bar and run through a game or two while you swill your favorite malted beverage. I've done both, incidentally.

You can buy a copy of Politico here: http://www.smallboxgames.com/politico.html
Posted by Matt Drake at 10:25 PM

You may claim that your review has caused at least one person (ME) to purchase this game.

I was going to buy it anyway, but I can't stop you from claiming it.

While I agree that the gameplay is still fun and engaging without paying any attention to the theme, I feel that the theme is very well expressed through gameplay and rules and can be (is for me anyway) an important element of the game.
Also I had no problem fitting the 50 plastic counters in the bag. Otherwise you could always put your weed in it.
I found that the card backs became scratched and lost their ink very quickly so I suggest you laminate them before you play.
All that said this is an awsome fun game. Buy it!

NIce review, I agree with eirikr - I actually think it does have a theme that really fits the game. The more people, the more back stabbing and the more ganging up on each other, just to change who your ganging up on the next time - being from 5 kids I know it well - the tides turn quickly in the family, and I am sure it must be a lot worse with royalty, or at least that I would figure.

But love the review, I really recommend this one to anyone who wants a great game!