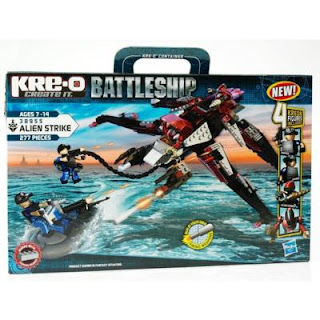 The same press kit that sent me Classic Battleship also gave me two incredibly cool Kre-o sets. For those unfamiliar (which would include me, until this press kit showed up), Kre-o is what Hasbro calls their Lego clones. The pieces all work with Legos, which means they should also work with MegaBlox, except that MegaBlox sucks hot summer ass. Sure, it's half as much, but that's because it's less than half as awesome. Except maybe the Halo MegaBlox sets. Those were fairly bitchin'.

At any rate, I was a wee bit concerned when I saw these sets. I absolutely love playing with Legos - have since I was eight - and I am really good at being disappointed in the quality of wannabe Lego sets. Printed pieces are cool; stickers blow. Cheap plastic is bad, but poor tolerances are awful. This is why MegaBlox is so crappy - they have all the bad stuff. They have crappy plastic, they want you to put stickers that cover up two pieces after you build your model, and in any set at least big enough to build an ambulance, you'll have a pile of bricks that won't fit together until you start shaving off pieces with an X-Acto blade.

So I opened the box, started sifting through all the plastic bags and flipping through the instructions, and find out that my cool-looking spaceship and special ops raft come with a huge nut-punch right out of the gate - stickers. Freaking stickers. Clear vinyl, sure, and they're printed with cool designs, but one corner had peeled up a little and so the step of the instructions where you add the little black doohickey to the little red widget and secure the entire thing to the flat grayish thingamabob - that step has a sticker stuck on it. Strike one, Hasbro. Strike freaking one.

Then I started putting together the little people. I was pleased to see that the human figures use ball joints at the hips and shoulders, meaning that you have a lot more flexibility, pose-wise. Sadly, the alien figures, while neat-looking, can't sit down. Seriously. Their legs won't bend all the way forward, and they don't have those little holes in the back, so they can't even recline. They look really cool, and have smoky-clear visors and drill hands and saw-blade attachments for their forearms, but I would be that those alien guys would gladly give up the vibro-hatchet hand for the option to sit their ass on a park bench and scratch their alien balls. Instead, they were going to have to stand up in their spaceship. Cool figures, but a bit of an oversight on the leg thing. You got a piece of that one, Hasbro, but it went foul. Strike two.

Undaunted, I called my daughter (who also loves playing with Legos) and we began construction. And I found, to my absolute delight, that these pieces are shockingly well made. I mean, Lego quality, or close to it. We didn't have one piece that didn't want to go together. We never ran into any place where pieces were too loose, either. I mean, they did this right. Sure, I had to put stickers on a few pieces, and I really hate that, but the quality of the individually crafted bits was far higher than I ever would have expected from anyone who wasn't Lego.

And the model we built is (forgive me for the intentional-yet-blatantly-irritating capitalization) BAD-ASS. It's this alien attack ship, about the size of an Apache helicopter if it were about 1/72 real size. It's got all these wings that can spin and bend and fold and angle, clear plastic fins, cannons, and flashy red bits. The best part? Guns that actually shoot. Lego would never, ever do that, because they only believe in violence if they can pretend nobody would die on the other end. Like, Serenity was too adult to be made into a Lego set (Indiana Jones, on the other hand, was fine, even though in that movie, Nazis got their faces melted off by God).

Not only is the model super-damned-bitchin', but it's very well engineered. If this was Lego, I'm not sure they would have done any better. You could swivel the moving parts, and they wouldn't fall off (which is in direct contrast to MegaBlox). The canopy could fold out and pivot open without wondering if it was going to fall apart in my hands. Everything moved smoothly without the threat of crumbling, which is much better than MegaBlox models. Those always make me feel like I'm holding a dried mud pie, and one false move will reduce the entire thing to component atoms and fried cheese sticks (not sure why I mentioned cheese sticks, except that I am getting pretty hungry). Yes, the Kre-o model was fantastic. I've built lamer Lego sets, and that's saying something, because to me, 'Lego' means 'quality' the way 'Nevada' means 'legal prostitution.' Home run, Hasbro. Well done. Run the bases, unless you're a major-league ball player, and then you'll probably just stand there and stare at the ball like a lazy asshole, even though you make more money in one game than I make all year.

There are a couple more of these Kre-o sets that I want to get now. I also have the Missouri, a battleship model with interior compartments and a lot more people, and there's a dead-sexy helicopter I want, and the diving suit set comes with underwater terrain. All this stuff should fit with Legos (though I don't actually have any to test that theory), so I'll probably pick up some of those UFO sets and make some crazy hybrid spaceships.

I think the biggest disappointment about Kre-o is how few models are available. You can get Transformers Kre-o sets, but I don't want those, and there are not a lot of Battleship sets, and then that's it. I want more of these. I'm not sure I wouldn't buy some My Little Pony Kre-o, if they were cool enough (that is a lie. I would not buy My Little Pony Kre-o. But I might buy Spongebob Kre-o). With all the crazy cool toys that Hasbro makes, you would think they could find a few more ideas to mine for inspiration. But for now, I'll take what I've got and be happy with it. And if something else cool comes out, I'll let you know. As long as Hasbro sends me one for free.

Cons:
I hate stickers in Lego sets (which means I also hate them in Kre-o)
An inability to sit down means that all aliens have to stand up to poop

I'm going to assume Hasbro has some Kre-o sets you can buy, if you're so inclined.
Posted by Matt Drake at 6:46 PM

The next step in awesome besides Spongebob Kreo is...

'Adventure Time' Kreo. Write that down.

Just for the record, my Lego Pirates were armed to the teeth with spring-powered Lego cannons which fired those cylinder-shaped bricks. And then there were the medieval Lego sets with catapults that fired bricks...ah, good old fashioned Danish violence. :-)

TThey just picked up the Star Trek licences,so there's that.