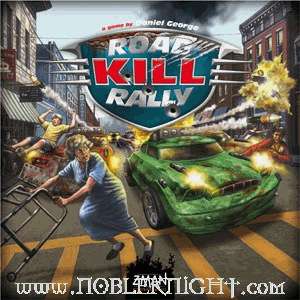 Every once in a great while, someone invents a game, and it seems like they made it just for me. Like, they handed out surveys, and based only on my personal response, designed a game tailor-made for me. Road Kill Rally is one of those games, and this is what that survey would have looked like:


We are making a racing game, and would like to know what you want to see. Please mark your choices with an X.


1. Do you want to see:
o Lots of complicated rules
o Rules that accurately reflect reality
X Rules that let you drive like a maniac and blow things to hell


2. What kinds of obstacles would you like on the track?
o No obstacles - keep it clean
o Minor, reasonable obstacles such as small debris and oil slicks
X Giant rocks, livestock and fat people


3. How do you prefer to interact with the other racers?
o Not at all - the race is a contest of wits, and the track is my opponent
o Subtle things like blocking and risky acceleration
X I want to shoot them with a tank cannon and ram them with explosive bumpers

If your survey would have looked like my survey, you are going to LOVE Road Kill Rally. It's easily the most offensive racing game I've ever played. You're racing the other players, but you don't have to win the race to win the game, because you can get lots of points during the race just by killing innocent bystanders. Bonus points are awarded for killing senior citizens and children. That's true. I did not make that up.

In Road Kill Rally, you and your friends are all engaged in a race, but it's a violent race with missiles and flamethrowers. You can fire at the other cars on the road, but extra points are awarded for killing people in the road. At one point, you drive through a boy scout camp, and at another, you speed past the retirement home and take out the old ladies with walkers. Drive past the barn, and you can rack up a few points by taking out the chicken as he tries to cross the road.

I know, I know, it sounds like I'm overselling it. But I swear, it really is that awesome. You can totally run down a fat guy, ram your opponent with dynamite strapped to your car, and then hose down a fourth-grader with a flamethrower. In fact, I recommend it.

Most racing games have some kind of mechanic to simulate how fast you're going and how hard it is to steer at 160 miles an hour, and Road Kill Rally is no exception. You get a hand of cards, and when your car gets beat up, you have to discard some of them. If you have to discard and don't have any cards, you wipe out. It's not permanent, or anything, or nobody would ever finish a race, but it does totally suck. And it happens a lot. Wiping out a lot is almost guaranteed to make sure you lose - though if you drive too carefully, someone else is going to beat you to all the best pedestrians.

Winning the race is worth a whole lot of points, but blowing up people you find on the road is also pretty lucrative, as is putting holes in your opponents. The track is full of all manner of crap that can wipe you out and cost you points, from wrecked cars and oil slicks to huge rocks and cows. Yep, cows. I did not make that up, either.

So you're sitting there, and you're reading this, and you're saying, 'why don't I own this?!' And I'm answering, 'I don't know! Go get it!' But before you just run out and start spending money, I should tell you about the art.

This is not a game lovingly rendered by Fantasy Flight (which is nice, or the rules would have been eighty pages long and you would have had three-thousand cardboard circles, and not known what to do with most of them). The art is not great. I would go so far as to say it is not good at all. It's crude and unappealing and frequently downright ugly. The grass on the map tiles is just flat green. The buildings have almost no detail. The plastic cars and plastic people are cool, but the illustrators for the rest of the game either sucked, or they just didn't bring their A-game.

But you know what? Who cares! You can fire a rocket launcher at an old lady while you're going 100 miles an hour! So what if the cards aren't sexy! You can peel rubber into a tight turn while you blast the car behind you with a machine gun! I can't quit using exclamation points! This game is that much fun!

I am willing to admit that the idea behind Road Kill Rally is offensive. It's not good to kill children with your car. It's bad. But that's why this is so damned fun - you can drive far faster than you ever should, commit heinous acts of mayhem and madcap bloodletting, and the only consequence is a slight erosion of your moral character. In my case, my moral character has already been worn down to a nub, so I'm pretty safe. It's cathartic and hilarious and aggressive, and while it rewards good dice-rolling over technical expertise, playing smart is still important. If you want to see careful resource management and limited actions, you'll hate Road Kill Rally, but if you want to race like a dervish and fight like a berserker, this is not a game you should miss.

Pros:
Smart moves, good planning and some old-fashioned luck
You can shoot a fat guy with an anti-tank gun
More fun than blowing up old GI Joes with firecrackers and BB guns

Cons:
Morally reprehensible (not a con, really)
Ugly art
Make peace with your dice, because they'll be your best friend

Racing game? Violence? Livestock? Yeah, it's all here. Get Road Kill Rally, and you'll have fun. Get it from Noble Knight Games, and save some bucks:
BLOW UP A BOY SCOUT
Posted by Matt Drake at 2:59 PM

My only complaint is that this game overstays its welcome.

Too long for what it is, but I have a huge soft spot in my heart for Deathrace 2000. David Carradine killing nurses and orderlies instead of the geriatric victims on general principal is my best memory of that film.

This game is not as good as that movie, but it is the best we have.

reminds me of battle cars back in the 80's. had some epic memories of having my car blown up but getting my driver out in time to kill my enemy right before getting ran over. good times, good times.

Reminds me of the videogame Carmageddon. Classic.

After laying the game several times and getting all the rules it is my favorite board game so far!!!

Everybody who loves Carmageddon should give it a try!!!