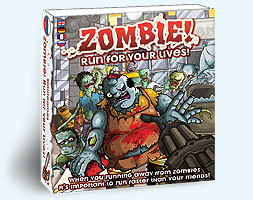 By now, I think we can all agree that the zombie game phenomenon is getting a little old. Every third game seems to be about either killing the undead, running from the undead, or becoming the undead so you can eat other people. It's an epidemic, and I'm pretty sure people are going to start getting tired of it very soon.

Apparently, Russia did not get the memo.

Russian Boardgames, a company whose name is only half-way accurate, has been responsible for some really cool card games. They made Potion-Making Practice, which I think is awesome, and a bunch of other stuff. And now they've translated another game into English, which is about zombies and thus, in the tradition of finding the most obvious name possible, they call it Zombies.

Zombies, like every other game I've seen from Russian Boardgames, is a card game. It's incredibly straightforward, to the point that explaining the rules will usually take about 45 seconds, unless you are smoking pot, in which case you will forget what you were saying and decide to watch cartoons and eat a huge bowl of cereal. On your turn, you either play a zombie on someone else, or play a weapon on yourself. If you can amass five different weapons, you win. If you wind up with five zombies, you lose and then just randomly attack people with whatever you've got handy.

The tricky part is that every different zombie card is cancelled by a particular weapon card. The rocket launcher kills the zombie bus, the baseball bat can swat away the headless zombie's, and the mouse will scare the zombie cheerleader (which, in this case, makes sense, because that mouse would build a nest in her ribcage and eat her decaying lungs until she could no longer yell, 'gimme a HURRRRR...'). So getting five zombies on an opponent is hard, because they can play weapons to cancel them, and getting five weapons is tricky because you keep losing them defending yourself against zombies.

But it turns out, it's kind of a hoot. The game itself is not much of a game, to be honest, but the fun part is the game that's happening outside the game. It's the part where you're trying to convince the other guy to put a zombie on your opponent so that you can slap down your fifth weapon, or the part where you're taking petty bribes to play your zombies on other people. The game itself isn't much of a game, really, but all the silliness that's happening outside the card play makes it far more entertaining than it has any right to be.

I'm not going to pee on your leg and tell you it's raining. Actually, I'm not going to pee on you at all. If you want a hard-thinking game with some thematic support and an intelligent set of rules, Zombies is not that game. This is strictly a game you break out when everyone has had a couple beers and you're waiting for the guys at the other table to finish up their Puerto Rico snooze-fest so you can all set up a bad-ass game of The Resistance. It's the very definition of a filler game, but it comes with some goofiness that you won't see in the rules.

As a bit of an aside, I wish that the illustrator for Zombies was an American, because the art in this game is fantastic, and I would like to hire him to draw a webcomic about weasels with irritable bowel syndrome. I don't think there's a lot of game in this game, but the art makes it worth owning just for the pictures on the cards.

So, the Russians are either late jumping on the zombie bandwagon, or they haven't realized how soon it's going to be before that particular bubble bursts. But it hardly matters, because the only way this is a zombie game is because there are dead people on the cards. This is a game about getting buzzed on imported beer and yelling at people while you wait to set up a game of Risk that will last until one of you gets fed up and flips the table. It's not a serious game, and it doesn't mean to be serious. Enjoy it for what it is - fifteen minutes of talking crap followed by doing something completely different.

Pros:
A quirky little game happens outside the game
Really fun art may actually make you laugh out loud

Cons:
Not a whole hell of a lot of game here

I wish I could tell you where you could buy Zombies (the game, not the dead people), but the publisher is in Russia. Here's a link to the website, though: