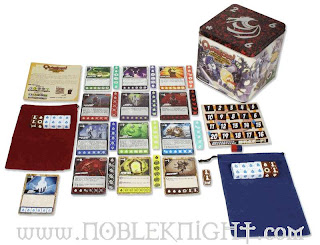 Tonight's review is like the guy who just discovered AC/DC and wants to tell everyone about it, except that everyone else has been listening to AC/DC since the 70s and they already know that Bon Scott was a better lead singer than Brian Johnson, and yet Back in Black was still an indisputably awesome album, especially the B-side. Because, see, I just played Quarriors this weekend, and pretty much everyone else has already played it, but I'm all excited so I'm going to be all, 'man, can you believe Angus's solo at the beginning of Thunderstuck?' and you'll all say, 'you know, I don't really care for AC/DC, and would really rather we discussed something that came out in the last, say, 20 years.'

I'm going to spoil the surprise ending and tell you right now that I think Quarriors is pretty freaking cool. I've played six games of it since Saturday, and I can't wait to play it again. So now that we have that out of the way, I'll explain why I like it better than Dominion, and I'll explain why I'm comparing it to Dominion, and I'll tell you why Dominion lovers might hate it, and then you'll say, 'yeah, thanks Drake, but we already have the expansion, and the promos from BGG, and we're about to get Quarmageddon, so way to be current, asshole.'

Quarriors calls itself a dice-building game, which is kind of odd, because that's like saying Dominion is a card-building game, but since Quarriors has you putting the dice you buy into a bag, the only way to be really accurate would be to call it a sack-building game, and then it sounds like you're taking turns whacking each other in the scrotum to make your balls tougher, and that's just absurd. So instead, it's a dice-building game. There are a bunch of dice on the table, separated into piles of five similar dice, and they sit on a card that tells you what each side means and how much they cost and how much they help you win.

Every turn, you roll a handful of dice and try to buy dice that will help you win and try to get rid of the dice that suck. Some creature dice will help you score big points, some help you buy other dice, and some just run around killing things like it was free. Then you have spell dice that might help you do all those things, too. When someone scores enough points (this usually happens inside 30-45 minutes), the game is over and you put away all those dice. Or you do like we did, and play again.

While I definitely see how Dominion fans could prefer their game, I think Quarriors is just more raw fun than Dominion. The biggest and most obvious difference, of course, is that you're buying dice. A card will do the same thing every time you draw it. A die, by comparison, has the capacity to do lots of different things. On the one hand, this means that you've got more options. On the other hand, it means that you can get screwed by a bad roll even if you pull good dice. And that means that luck-hating puzzle-solvers are going to absolutely hate Quarriors. It also means I like it better.

That random, chaotic element of dice-rolling madness combines with the ability to outright attack your opponents' monsters to create a game that can surprise you, while still allowing the more skilled player to have a very good chance of beating the inexperienced chump. It also means that you can get more mileage out of just the base set of dice, because even with the exact same distribution of available purchases, every game will be different, just because you won't roll the same thing every time.

Plus Quarriors just feels more fun. The dice look like candy. The art is campy. The game uses a silly number of words that start with the letter Q. And you're not building up a kingdom, you're summoning creatures to perform bloodletting on your behalf. If real men play games where people die (and they do), they can definitely get into Quarriors, because there's a sweet body count for this one (though lots of times, you're not just killing people, you're killing dragons and goblins and primordial ooze beasts).

I have heard people complain that Quarriors lacks the depth of Dominion, and those people might be right. When you're playing Dominion, the game usually goes to the guy who can pick out the right combination of cards in the right order and make them work to his advantage. In Quarriors, you don't have to pick out your strategy before you play. In fact, you can't, because your dice won't go along with your plans. You can definitely look and say, 'this hag plus this priest plus this knight will make a mean combo,' but your dice might look at them and say, 'sorry, tough guy, make it work with a goblin and a ghost.'

In fact, Quarriors is more fun than Dominion simply because it cannot be solved. There's no 'perfect' deck. There are good buys, and there are smart decisions, but you can't tell your dice which way to roll, and that means that you're always doing the best you can with what you have. There are plenty of tricky decisions - do you buy now and summon later, or get that big critter in play while you can? Do you pick up the cheap portal die, or just go straight for the spell that will keep your monsters alive long enough to score? You can form a strategy from the outset, and I would recommend it, but there's no analyzing the 4-1 split or figuring out the optimal way to make your turn take half an hour until you've got your entire deck in play.

In fact, that's another reason Quarriors is better. Turns go really fast. You pull out some dice, roll them, buy something or summon, and then you're done. If your monsters can kill something, they will, and hopefully nobody will kill your minions before you get another turn. It's quick and crazy and just plain fun. So what if you're not in a contest to determine who has the best analytical abilities. You're rolling dice and summoning monsters who will kill things for you. That is WAY more fun than dissecting a mental spreadsheet.

So for the three people out there who haven't already tried Quarriors, I give it a big thumbs-up. It's a hoot. For everyone else, wait for my next review, when I'll tell you all about how I just tried chess, and man, is that a tough one to master.

Pros:
Looks great
I love rolling dice, and boy, do I get a chance to do that with Quarriors
Chaotic luck element, but the better player will still win most of the time

Cons:
Lots of dice means it's tough to predict, making long-term strategy a bit of a crap-shoot

If you like deck-building, but want to see what it looks like when it's all Ameritrashy, run over to Noble Knight Games and pick up a copy of Quarriors:
ROLL THEM BONES
Posted by Matt Drake at 4:29 PM

As one of the three people who haven't tried Quarriors, I appreciate reviews that cover games that have been out for a while. Maybe I should come out of my cave a little more often...

I've got a Harry Potter conversion for Quarriors I need to send your way, if you like Quarriors, and Harry potter...it's a no-brainer.