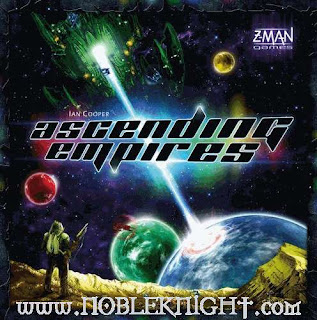 Sometimes, when I am looking for inspiration to write a game review that will make people laugh, I go to Dave Barry's website and read some of his old columns. They make me chortle, possibly guffaw, and then I am usually prepared to write something that will be, if not outright funny, at least amusing.

Today, that did not work. I am reviewing a game called Ascending Empires, and I cannot for the life of me think of a gut-busting way to start, despite having just read about a truck driver cursing at a young boy over the outcome of a baseball game. Which means that right off the bat, this review is going to be weaker than cheap whiskey in a frontier saloon. I apologize. I will not take it personally if you decide to stop reading now and just go look up some Dave Barry columns, as he is actually funny and I am simply a game nerd with a fondness for juvenile humor.

Are you still here? Well, then, I suppose I should tell you what I think about Ascending Empires, even though you will probably not laugh during my entire unfunny review. And here it is - Ascending Empires is very fun. And while there are opportunities during the game to shoot a small round disc directly into your opponent's nose hole, these accidental snafus will not actually be funny, though they may inspire you to throw away the board and make your own out of your mother's dining room table. Go ahead. She won't get angry. She'll just tell you how disappointed she is (which, if she was being honest, means that she is angry).

Ascending Empires is one of those games about building technology in space and exploring alien planets and killing people. I like games about killing people, and that other stuff isn't too bad, either. But the thing that makes this game different from the other 172 games about killing stuff in space and exploring planets while your tech nerds make new iPads is that in this game, you move your spaceships by physically striking them with your finger.

But you will do so much more than simply push round discs. You will also explore alien planets and build colonies, research technologies and recruit troops. This part of the game does not require any more dexterity than you might need to put one plastic thing on top of another plastic thing, and so we could call it the 'complete lack of dexterity' part of the game. But it will probably be easier to just call it the 'mental' segment, and avoid having to write a bunch of stuff every time I want to describe it.

The decisions you make in the mental part of the game directly impact the dexterity part of the game. For example, if you get enough technology, you can replace your small spaceship discs with a slightly less small spaceship disc, and then people will be scared of you and intentionally fire their own wooden tiddlywinks at you in an attempt to destroy your newfound wooden disc (that, or they will shoot really hard and try to blind you). Another technology advancement lets you flick your spaceships more often during the turn, which is good if you suck at it as much as I do (since I have no dexterity to speak of).

In return, your skill at the dexterity portion of Ascending Empires will affect the mental portion. If you can get your ships where you want them, you can defend your planets, land troops, or lay siege to enemy planets. It's a good give-and-take that means you can't afford to ignore either segment of the game, and yet you will still be able to make strategic decisions and enjoy the wonder of hitting your spaceship so hard that it bounces off an obstacle and flies directly at your wife's face. Come to think of it, I would not do that, if I were you. It's not nearly as funny in practice as it seems on paper. Neither is sleeping on the couch.

The end result of all this counterplay of playing smart and being good at flicking things is a game that is surprisingly engaging. When I compare it to Space Pirates, another game about flicking things in space, Ascending Empires comes out far ahead. This is a smart, fun, interesting game that plays very quickly and makes you think the whole time. No one strategy is superior - you can spend a lot of time doing battle and fighting your opponents, but if you do, you will not have enough time to build cities and research HTML5.

But you know what's the really irritating thing? The board. It's big, which is good because you need room for flicking, but it's built out of big puzzle pieces. No matter how well you put it together, the seams will actively repel your wooden spaceship discs, and they will bounce off and wind up somewhere stupid. This is exceptionally frustrating, to the point that we wanted to put a big piece of glass over the board. Only we couldn't, because there are these little holes where you have to put the planets, which are also wooden discs, but you can't flick them because they're stuck into the holes.

This is actually a very serious complaint. I can overlook a lot of minor foibles, but when half the game is about accurately shooting wood discs, having the board pop up and screw you is enormously problematic. And heaven help you if your boards warp, because then they will never lay down properly. My best advice is to make a board yourself out of plywood or plexiglass. That, or drill holes in your table. Because the board that comes with this game is infuriating, and one of the strangest physical production decisions I've seen in a long time. It's like shooting pool on a table with chewing gum stuck all over it.

But don't let the incredibly irritating board wave you off. Ascending Empires is a bunch of fun, even if you have to house-rule something about reshooting if you bounce off a crack in the board. There's a wonderful balance between using your head and using your finger (a trait shared by another game I play a lot, called Driving on the Freeway), and there are lots of different strategies that can win you the game. I think that if I can convince my family to play a lot more, I will probably go ahead and make my own board, which will alleviate my only real complaint.

So we find ourselves at the end of the review, and I never did come up with anything worthy of so much as a quiet giggle. If Dave Barry were my spirit guide, he would be very upset. For one thing, it would mean he was dead, which could come as something as a surprise to him. For another, he would very disappointed. Which is just a nice way of saying he would be angry.

Pros:
Great balance of mental acuity and manual dexterity
Lots of different strategic possibilities
A good amount of interaction, without forcing you into conflict

Cons:
The board actively defies you to play the game

If my bland and uninteresting review has inspired you to purchase Ascending Empires, and if you can forgive me my failure to amuse, you should go get it from Noble Knight Games. You'll save a bunch on it, too:
FLICK YOUR DISC
Posted by Matt Drake at 2:40 PM

Hey Matt, I'm making a board for a friend for this out of plexiglass (using a 1.5" hole saw) next week, so if you'd like to play it with that one and/or like me to make you one at the same time (at cost), let me know.

That's awesome! I am actually planning on making my own, but I appreciate the offer. Playing on it, though - that sounds like a good idea.